Assisted Suicide and the Pain Question

Assisted Suicide and the Pain Question 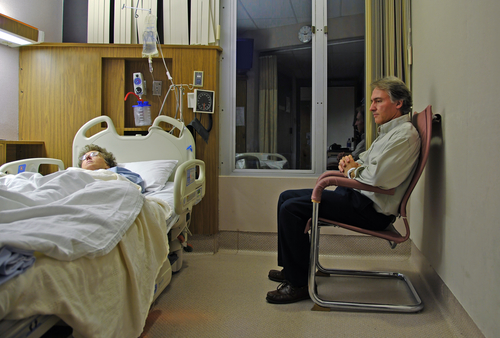 When you’re talking to advocates of assisted suicide, one of the things you discover right away is that most have a story, a terrible story, of someone suffering unnecessarily. Senator Bill Monning, co-author of the California legislation, talks about a young man with two young children who went through a “horrific” time with brain cancer. For Methodist Minister D. Ignacio Castuera, it was the AIDS patients he worked with in Hollywood. Says California Campaign Director Toni Broaddus, “I’ve seemed some bad deaths.”

Pain—none of us want it in our lives at any time. But when we look towards our death or the death of loved ones, one of the great fears—alongside the possible powerlessness or loss of our self—is the fear that we will suffer greatly. And assisted suicide stands as a way of avoiding that trauma.

Intriguingly, those who have made use of the assisted suicide legislation in Oregon and Washington do not rank pain as one of their top motivators. In fact, only about a quarter did so out of any concern for either actual pain or the fear of possible pain. Advances in hospice and palliative care have brought us to a point where most can move through that final phase of their life peacefully. “For most people,” says Dr. Joseph Rotella, Chief Medical Officer for the American Academy of Hospice and Palliative Medicine (AAHPM), “if you give them a palliative care team, a hospice team, and if you address their goals and what is really important to them and you focus on giving them the best quality of life you can, the majority of people are going to experience a much better quality of life. And those last days and hours of life will be worth it for them.”

That’s not to say pain management works for everybody. And advocates of legislation like California’s SB 128 sometimes use that possibility to scare up votes. In my conversations with advocacy group Compassion and Choices, they note that palliative care for the terminally ill often amounts to sedating people into comas—an unattractive if not awful position for all concerned. When I pushed back, noting from my conversation with Rotella 1) that palliative care is not just about pain but about helping people develop an overall physical, spiritual, financial plan for their situation; and 2) that in most cases they find the pain management works very well without medicating them to the point of constant sleep, I was immediately sent emails of articles suggesting that pain management is working less and less well, such as this one:

“Pain is one of the most prevalent and troubling symptoms, and patients and families fear it and wish to avoid it near the end of life,” notes a report published in the Feb. 3 issue of Annals of Internal Medicine, Symptom Trends in the Last Year of Life From 1998 to 2010: A Cohort Study. Despite national efforts to improve end-of-life care, proxy reports of pain and other alarming symptoms in the last year of life increased’ from 53 to 61 percent, the study concluded.”

The point seeming to be, pain management isn’t working. In fact, if you don’t check the study and the terminology closely, you might think that 61 percent of people who are terminally ill die in pain. But again, only about a quarter of those using assisted suicide in Oregon and Washington are stating pain or the fear of pain as a prime motivator.

This kind of obfuscation unfortunately seems to be a strategy of Compassion and Choices. Indeed, one of the fact sheets they sent me indicated that the AAHPM is one of a number of organizations that “have adopted similar policies” to their own. In fact the AAHPM is neutral on assisted suicide; and the link Compassion and Choices offers to their website takes you instead to the organization’s richly pastoral 2007 statement about how to provide care for patients who want to die. It begins: “When a request for assistance in hastening death is made by a patient, AAHPM strongly recommends that medical practicioners carefully scrutinize the sources of fear and suffering leading to the request with the goal of addressing these sources without hastening death.”

(Since being challenged on this, Compassion and Choices has corrected its documentation to make clear that the AAHPM has adopted similar policies only with regard to terminology for the procedure, saying that they use the term “physician assisted death” because it proves less “emotionally charged” than physician-assisted suicide. They indicated that the mistake came from a data sheet developed by a prior team.)

After receiving Compassion and Choices’ information about increases in pain amongst the terminally ill, I returned to Rotella. “There are scores of articles,” he writes, “that show that patients who receive quality palliative care or hospice experience a better quality of life. For me, this article reinforces the need for us to remove the barriers that are preventing folks from getting quality palliative care throughout the course of serious disease and hospice care near the end of life.”

“Our medical system is failing. Palliative care and hospice are part of the solution, not the problem.”

And this is a major but largely unaddressed question for the assisted suicide debate. When it comes to pain, is the real problem unmanageable suffering or access? According to Rotella, palliative care in particular, which is generally not well covered by health care, could reach far more people than it currently does. And though Medicare covers hospice, “half the people who could use hospice care don’t.”

None of us want to see our loved ones die in pain, or go through that ourselves. Catholics can talk about the meaning of suffering until they’re blue in the face; from the outside, it’s not something that makes a lot of sense to most people. If there are other options, we want to take them.

But maybe the real push we should be making is not to add a new and controversial option, but to demand that when the time comes everyone gets the care they need. Societies are judged on the basis of how they handle their weakest members. Maybe the first question we should be asking is, how are we providing for ours? The very fact that some are demanding the ability to kill themselves might suggest, not well at all.

Show Comments (
2
)
Comments are automatically closed two weeks after an article's initial publication. See our comments policy for more.
Bruce Snowden
4 years 8 months ago
Here’s how I see it. It’s impossible to eliminate all suffering from the face of the earth, but because Medical Science is in the service of pain relief to “aching humanity” that term Jesus’ to St. Faustina Kowalska, Medicine should, as a result, place that service on its front burner. There discovering and developing pain-liquidating systems that annihilate unbearable pain, while preserving full cogency to the afflicted person. This could nullify a terrible kind of living dead existence sedated to death. Divine Wisdom commissioned humankind to “subdue the earth.” The first subjection should be total relief from unbearable pain and medicine should lead the charge! However, it’s interesting to note, that when “trouble down the pike” happened calling for Redemption, it was by use of pain our most common experience that Jesus accomplished his job – Salvation. Thus St. Paul has told the Church something curious – humanity by uniting its pains, sufferings, to Jesus’ can actually “complete” or “make-up” whatever was “lacking in the sufferings of Jesus.” Of course there was nothing lacking in the Salvific sufferings of Jesus, so linking up to the term “Body of Christ” which St. Paul also used, is, I think, necessary to understand what he meant. I think he was pointing out that the Body of Christ whom we are through collective humanity, buttressed and perfected through any of Baptism’s three forms, is ONE with the Body of Christ on the Cross, so identical that our pain and suffering combined with His “make up” or “complete” Calvary’s oblation. We are that closely grafted into Christ and He into us! This reality of Faith gives an entirely new understanding to suffering , it’s value, its usefulness before God. Having said this it must be remembered that Jesus in his teaching implied that we must do all we can medically to eliminate suffering from the human experience. Anticipating a necessary balance to Paul’s insights I would suggest, Jesus said, “It is the sick, not the healthy, who need a physician.” I have not yet experienced any unbearable pain, yes, bad pain but not unbearable, but sooner or later it may come. Beginning as a young man and continuing into my old age, I have spiritually and psychologically prepared myself for great suffering – may it never come! Holy Father Francis too hopes his end will not include great pain. No matter what however, Assisted Suicide will not be an option for me. If great suffering is in the cards so to speak, I pray that Jesus will give me the necessary strength to unite mine with his, dying with him a salvific death atoning for sin, especially mine, this “atonement thing” a mystery of our Faith. In the meantime I hope Medicine solves the pain problem in the right way soon!
Clare Sebok
4 years 8 months ago
After spending many years caring for my elderly parents and aunt, I think the author is absolutely right to zero in on access to palliative care. There are many barriers that should be addressed. One issue it that many people are uninsured. Another problem is that patients who are relatively stable can be discharged from hospice care against the family's wishes. This happened to my aunt when she was 95; the hospice agency said, "She isn't declining quickly enough." There should be a way for people to stay in hospice care if they or their family believe it is in their best interest; perhaps a less-intensive level of hospice care could be established for patients who temporarily need fewer services and less frequent monitoring. Another problem is that entering hospice care requires the patient to give up many treatment options. Many patients and their families must find it difficult to formally commit to giving up certain options such as calling 911 or pursuing any treatment that is considered curative. Surely the boundary between hospice and non-hospice care doesn't have to be so absolute and rigid. I once had to sign my aunt out of hospice care so she could get a CAT scan, which provided information that was essential for keeping her more comfortable. Hospice care is not a utopia; there is much room for improvement. One other factor that may interfere with access to palliative care is the DEA's overzealousness in restricing access to controlled substances. This is mostly a problem for people who are not formally in hospice care but are suffering from pain.
Advertisement