'Archbishop Romero is a Martyr of the Church of Vatican II' 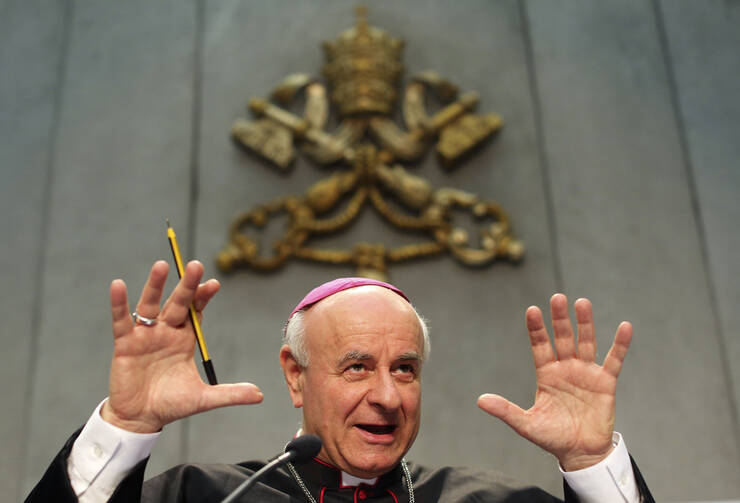 “His death—as is clearly shown from a careful examination of the documentation—was caused not from simple political motives, but from a hatred of the faith kneaded with the charity that would not remain silent in the face of the injustices that implacably and cruelly struck down the poor and their defenders,” the Vatican archbishop added.

“His death at the altar—a death that was without doubt more uncertain given that he had to be shot from 30 meters rather than from close up—had a symbolism that sounded like a terrible warning to anyone who wished to follow on that path,” Paglia stated.

“They wanted to silence the Church of Romero!” the Vatican archbishop said. But now Pope Francis has recognized him as a martyr, and he will be beatified in San Salvador this year, in the coming months. The date has yet to be agreed with the church authorities there.

He recalled how the martyrdom of Romero “is closely linked” to that of his Jesuit priest friend, Rutilio Grande, who had left his university teaching post to live among the poor in the small village of Aguilares. Romero, who had become archbishop of San Salvador some weeks earlier, presided all night at the wake for his friend who was assassinated on 12 March 1977, and seeing the peasants gathered there looking ‘like orphans’ that had lost their father, the new archbishop came to realize that he had to take his priest friend’s place. Romero, who had always been close to the poor from his earliest days as a priest, later confided to a friend that on that night at the wake of his dead friend he felt “a divine inspiration’ to take up a strong stance against the violence in the country. He had always felt a special closeness to the poor, but he felt it even more after the death of Rutilio Grande (whose cause for beatification has now been opened).

At the press briefing, Archbishop Paglia was flanked by Professor Roberto Morozzo della Rocca, a member of the Sant’ Egidio Community who teaches history at one of Rome’s universities.  The professor provided the crucial historical research that supported Romero’s cause and claim to martyrdom. He and Paglia provided an in-depth portrait of the martyr bishop, but there is only space to mention a few points here.

Paglia recalled that “Romero always loved the poor” and as “a very young priest” working in San Miguel “he was accused of communism because be asked the rich to give a just salary to the peasants who were cultivating coffee.” At that time too he organized a soup-kitchen for the shoe-shine boys in the zone, and became well known for his generosity. “He frequented the rich too, but asked them to help the poor and the Church, as a way to save their souls.”

Later, when he became archbishop, the country’s oligarchy came to see that his appeals for social justice and his defense of the poor would undermine the social order that they were determined to keep. They perceived him as a threat.

Professor Morozzo della Rocco revealed that there was a climate of persecution and repression in the country in the period before his death, and “Romero knew that he would be killed and for this reason he experienced a long internal travail.” He received countless death threats, but he made clear that “he would not abandon his flock, even if the Holy See offered him hospitality.” He reflected often on martyrdom as his priests and very many of his catechists were killed, and he assisted at their funerals.

Three weeks before he died, the professor said Romero told his confessor, “It costs me to accept a violent death... I must be in the disposition to give my life for God whatever be the end of my life. One will live the unknown circumstances with the grace of God. The Lord assisted the martyrs and, if necessary, I will feel him very close in offering my last breath to him.  But even more than giving him the moment of (my) death, it’s worth giving him all my life and living for him.”

The Italian historian-professor said that in actual fact, “Romero was terrified by the death that he felt was imminent. In the last weeks before his assassination he was frightened by any noise...He didn’t know whether the extreme-right or the extreme-left would kill him... He felt down during his last weeks.”

The day before he was killed, however, he preached for two hours and pronounced that famous appeal to the soldiers asking them not to kill their fellow countrymen in violation of God’s law!  “After that appeal he seemed at peace.” He went for lunch with a family who had adopted him, and played with the children. But at a certain point during the meal he experienced a moment where he seemed lost, and wept openly. He remembered his best friends and spoke about the gifts God had given each of them. It was a disconcerting meal for the whole family, the professor said.

Romero knew his hour was near. His priest-secretary Father Delgado—who was also at the Vatican briefing—told the press that he had seen the archbishop was very tired and so offered to say Mass for him that day, but Romero refused saying he didn’t want another to take his place. He was killed at Mass that same evening.

Archbishop Paglia told the press that Romero “was a bishop who was most faithful to the Magisterium" and "in his papers there emerges clearly his familiarity with the documents of Vatican II, Medellin, Puebla, the social doctrine of the Church and (more) in general the other papal texts.” He recalled that in a homily 20 days before his death, Romero said; “The greatest joy of a pastor is to live in communion with the Pope. For me the secret of truth and of the effectiveness of my preaching is to be in communion with the Pope. And when I see in his magisterium thoughts and gestures similar to those of which our Church has need, I am filled with joy.”

In spite of all this, Archbishop Paglia admitted, speaking off the cuff: “We had to wait for the coming of the first Latin American pope to beatify Romero.”

The Vatican prelate was somewhat more guarded in his written text. “It is not without significance that Romero’s beatification comes precisely when, for the first time in history, there is a Latin American pope on the See of Peter who wants ‘a poor church, for the poor.’ This is a providential coincidence!” he commented.

“Romero was killed because he had chosen to be among the poor,” the Italian archbishop said. He had come to know this courageous pastor, when he was ecclesiastical assistant to the Sant’ Egidio Community in Rome, a community that was then close to the archbishop of San Salvador and to the Church in El Salvador. Paglia knew well Romero’s trials then not only in his impoverished, violence-stricken homeland but also his problems with the Vatican under the pontificate of John Paul II. He knows too what an arduous task it has been to get the approval for his cause through the Congregation for the Doctrine of the Faith (CDF). It has taken almost three decades. Understandably, however, in his media briefing he only alluded to all this without going into much detail and insisted that “this is not a day to look at the past so much, but to look to the future” and what the recognition that his martyrdom and his forthcoming beatification means for the whole church.

The archbishop-postulator went onto give credit not only to Pope Francis for finally opening the door to Romero’s beatification by recognizing him as a martyr, but also to John Paul II and Benedict XVI for their assistance on that long journey to beatification.

Responding to a question, however, Paglia acknowledged that there had been “misunderstandings” when Romero met John Paul II twice in the Vatican, but he attributed this to the flow of negative information that had come to the Holy See. On the other hand, he claimed that John Paul II came to see things in a different light after Romero’s death, so much so that he insisted on going to the martyr's tomb and praying there  during his visit to El Salvador, though this had not been in the agreed program. He also recalled that John Paul II had personally inserted Romero’s name into the list of 20th century martyrs for whom they prayed at the special ceremony at the Coliseum in the Jubilee Year 2000. Indeed, he said John Paul II placed Romero alongside Saints Stanislaus of Krakow and Thomas Beckett of Canterbury, who were also slain at the altar, and often said that “Romero is ours, Romero is of the Church!”

The postulator of the cause credited Benedict XVI for moving Romero’s cause forward, shortly before his resignation. He had “followed the cause from the beginning” and on 20 December 2012, “decided on to unblock it so that it might follow the ordinary path.”

He credited Cardinal Angelo Amato, Prefect of the Congregation for the Causes of the Saints, with moving the cause forward rapidly once the dossier had been passed to his congregation on from the CDF. He revealed that both the commission of theologians and the commission of cardinals and bishops had voted unanimously that Archbishop Romero had died as a martyr “in hatred of the faith.”

Gerard O’Connell
@gerryorome
Show Comments (
3
)
Comments are automatically closed two weeks after an article's initial publication. See our comments policy for more.
Carlos Orozco
6 years 11 months ago
The title is misleading. The Church of Vatican II is the same founded by Jesus Christ and his Apostles. If it were not, we would be losing our time.
Robert Lewis
6 years 11 months ago
The title is NOT "misleading"; it is perfectly legitimate to refer to the "Church of Vatican II," just as it is legitimate to refer to the "post-Tridentine Church" and the "Church of the Middle Ages." To say that one may not is a rhetorical ploy of rejection of Newman's ideas in The Development of Doctrine--which, of course, all so-called "Traditionalists" MUST deny, if they are honest. And John Henry Newman is philosophical sponsor of the Second Vatican Council.
Carlos Orozco
6 years 11 months ago
I am not using any rhetorical ploy, I am simply stating the obvious. If ever the Church (or a sector of it) rejected the teachings it has divinely received (which Vatican II did NOT), it would instantly become a gigantic bureaucratic institution, almost certainly at the service of the powers that be of the day. But Jesus has promised to accompany His Church to the end of times. That is good enough for me.