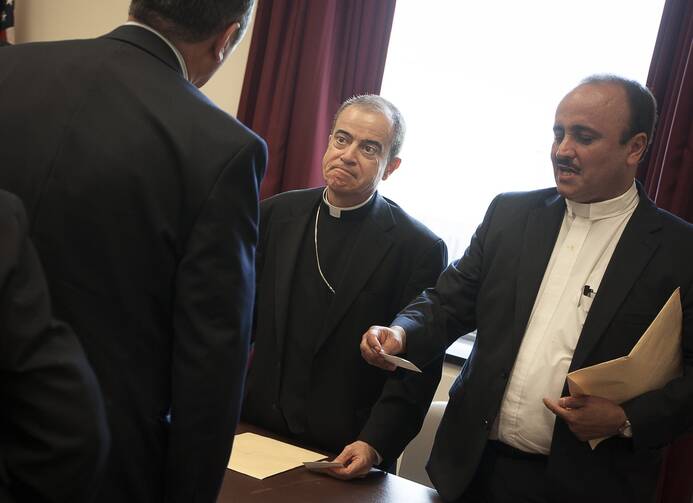 After listening to all the reports from the 13 language groups and the speeches in the plenary assembly, Archbishop Roberto Gonzàlez Nieves of San Juan, Puerto Rico, is convinced that the synod fathers are “leaving the doors open” and giving Pope Francis “the freedom to follow up” on the questions that have emerged at the Synod on the Family, which concludes its work on Oct. 24.

While reserving judgment until the synod has approved the final document—a draft of which will be distributed to the synod fathers this evening—Archbishop González said he believes “the majority of the bishops are coming down in the center and are very sympathetic to the Holy Father’s pleas” for a more merciful and pastoral approach in the whole field of ministry to couples and families.

In this exclusive interview with America’s Vatican correspondent, Archbishop Gonzàlez hailed Pope Francis’ speech at the 50th anniversary celebration for the establishment of the synod of bishops as “revolutionary,” and explains why he considers it so.

The Vatican has just published the third batch of reports from the 13 language groups in the synod. What do you make of them? Where is the synod going?

I find it hard to say exactly where the synod is going. However, my sense is that after having listened to all of the reports, the bishops want, on the one hand, to express their solidarity with the human drama of families today and marriages today and, on the other hand, to emphasize their sense of fidelity to church teaching. And I think the great challenge of the synod has been whether to put the accent on dogma or to put the accent on pastoral life.

I think a lot will depend on the editorial committee and seeing the document that they produce. Hopefully it will be a synthesis of all that has been said and will place in balance both of those elements, however, keeping in mind that the synod is primordially a pastoral effort, reaching out to families, articulating the vocation to family and marriage in the Christian context and seeking to touch a wounded world.

After reading the reports and listening to the speeches, do you feel the synod is closing doors or leaving them open for the pope to follow up?

However, when the pope spoke last Saturday on the question of “synodality in the church,” he emphasized quite often that the successor of Peter is the one who guarantees the unity within the church. My sense is that he is being particularly attentive to the question of unity and I think that will require of him a great deal of wisdom and a great deal of discernment to keep in balance the opposing tensions that are manifest among the bishops.

My sense is that the people of God everywhere see that the pope’s message of mercy and welcome is a great grace and a blessing for the church. On the other hand, my sense is that among many of the bishops there’s a greater accent being placed on the doctrinal position and the pope will have to discern how and when, and which steps to take, in order to preserve that balance, to preserve unity, and at the same time to reach out in a spirit of mercy and openness that I perceive in his homilies, in his talks and in his speeches.

Do you have a sense whether there are more fathers with the pope’s merciful and pastoral line or with those that want a strong affirmation of the church’s traditional disciplinary position?

In my group, for example, we had both voices represented but, after intense dialogue and very divergent points of view expressed, in the end we were able to come to consensus.

Were you surprised at that?

Yes, and I was quite moved by it, because I felt that in some way the Holy Spirit was present and working. It was an eerie kind of a feeling, but I could see where there was a genuine effort of bishops to come together in my group.

Did you sense this too in the plenary assembly when you hear people speak, or are the divisions and tensions more visible there?

I think the tensions were quite visible the first week. In the second week the tensions diminished and were softened. And now, in the third week, we still haven’t had an open discussion in the entire synodal body, so it will be interesting to see how the dialogue, the expression of the interventions go after having been through the small group experience. My sense is that there will be a much more conciliatory tone.

As you look ahead to the conclusion of the synod, do you expect Pope Francis to decide to issue some magisterial document?

We really haven’t been told.

But have people requested this?

A couple of the groups stated that, but I think in general the groups are saying we are here to make proposals to you, and it’s your decision to decide what to do with those proposals—if you want to prepare an apostolic exhortation, or if you simply want to release the report of the synodal body. I sense there’s a desire among the bishops for the pope to decide what he wants to do.

So they see him as the one who can pull it all together?

Pope Francis spoke last Saturday, Oct. 17, and reminded everyone that the synod ends when the successor of Peter speaks in an authoritative way. What did you think of that speech?

I think his speech last Saturday on the occasion of the 50th anniversary of the establishment of the synod of bishops will be one of the enduring documents, speeches, of his pontificate. Maybe one word to describe it is “revolutionary,” because he seeks for a church that is synodal at the universal and particular levels, and develops the concept of synodality for dioceses, which I think will be very important. It changes the dynamic in the way authority is exercised in the church, and introduces a greater sense of co-responsibility for the life of the church. And he affirms the role of Peter at the service of the entire community and contextualizes that service within the ecumenical realms. I think it’s an extraordinary speech.

You’ve had previous experience of synods, and this is your fourth. Is there something in particular that has struck you about this synod?

It’s been the most intense synod that I have been at. The topics have been quite complex, quite difficult to deal with because the pastoral impinges upon the doctrinal and the doctrinal impinges upon the pastoral. Some of the issues are very sensitive; the issues that surfaced from “Humanae Vitae” [Paul VI’s encyclical], for example, they have been addressed in depth at least in my group, and from the reports I can tell that the question of the divorced and remarried Catholics—a very delicate issue—was particularly challenged and very difficult to develop in our dialogue.

So it has been a much more intense experience. I’ve heard from many other bishops where I stay at the Casa Romana del Clero, Via Transpontina—there are about 40 bishops staying there—and I’ve heard many bishops say, “I’m exhausted!” In previous synods I didn’t really hear bishops saying, “I’m exhausted.” I think it’s been an exhausting experience for many of the bishops, if not all.

What memory are you taking away from this synod?

Well, it’s still not over, so I would hesitate to say. I would like to think that the Holy Father’s message at the end is what I want to take away with me.