Into Africa: The Jesuits in Africa and Madagascar 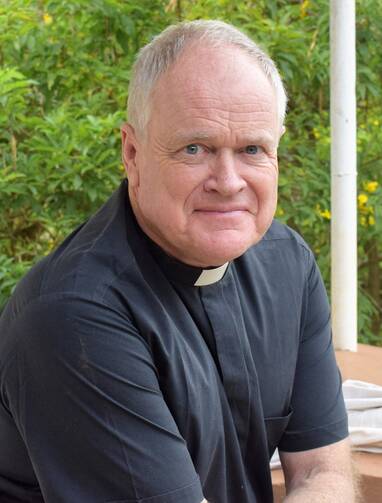 How many Jesuits are there in Africa?
We have 1,600 Jesuits in Africa, but that is a moving target. It’s an interesting demography because you have to break it down and realize that over 600 are still in some form of formation, which means they are not really working apostolically yet. Then there are the retired missionaries and some retired African Jesuits—which cuts out another 200 or so. So effectively we have got about 50 percent of the Jesuits engaged in full-time apostolic work in Africa and Madagascar.

Where will you find Jesuits in Africa and Madagascar? Are they all over or in certain regions only?
You have to think of Africa as sub-Saharan Africa because there are very few Jesuits in the Maghreb, and they belong to the Near East Province since culturally it’s Arabic. Sub-Saharan Jesuits are in an extraordinary number of countries.

The provinces of West Africa [one Anglophone, one Francophone] stretches from Dakar in Senegal all the way down to Brazzaville in Congo and up again to N'Djamena in Chad. It is a huge area with only about 220 Jesuits engaged in all sorts of things.

Then if you come down to Central Africa you have got Congo, which is one of our biggest provinces. On the other side of the continent, East Africa, we stretch from Sudan in the north all the way down to Tanzania. Stuck between those two provinces is the region of Rwanda/Burundi—where there are some 90 Jesuits in two very small countries. The East African Province is big—about 200-plus Jesuits.

And then if we come down south we have the provinces of Zambia/Malawi and Zimbabwe/Mozambique, which have the same sort of numbers. The region of South Africa has a tiny population of about 25 men. So, in short, the Jesuits are all over the continent.

It’s very important also not to neglect Madagascar, which has a large province of 260 men, and they are part of this assistancy.

What kind of things would we find Jesuits doing in this part of the world?
Many things! There are 28 Jesuit schools that are owned and run by the society, but there are a huge number of diocesan and other kinds of schools that are taken care of by the Jesuits. Fe y Alegría schools are just beginning to work very well; they are starting in Madagascar and in Congo. So education, of course, is an important part of things.

Then there are a number of tertiary education institutions. It’s interesting to see that the older provinces, namely Madagascar and Central African Province, have a number of tertiary institutions. Madagascar has, for example, an agricultural school, an architectural school and a journalism school. These are now being united into what will eventually become a university.

The same applies in the Democratic Republic of Congo [D.R.C.] where the Jesuits run an agricultural and veterinary institution at the tertiary level. They run a number of institutes that deal with political science and human rights. Their strategy has been to develop these tertiary-level institutions and then unite them to form a university.

In the younger provinces—West Africa, Nigeria and Ghana and the English-speaking West African countries—the Jesuits are starting from scratch, and they have plans to build universities. The same applies in Eastern Africa. Of course all these undertakings require a huge amount of money, manpower and resources, so the progress is going to be slow and complicated.

One of the most important works of the Jesuits in Africa is the Jesuit Refugee Service, which probably touches more people than any other single Jesuit work. We have men working in camps like Kakuma in the north of Kenya, which has 135,000 people in it. They work a great deal in the Central African Republic, which is in difficulties at the moment. All these areas have ongoing difficulties, and war has very often created emergencies that JRS attends to.

Then there are Jesuits who work in the human rights area. The Francophone provinces have been very good over the last 60 years in developing social apostolate institutions. Their tendency is to have reviews—we would call them journals. At the moment we have eight social apostolate institutions in Africa, and there is a network developing among them. This is quite complicated if you consider the diverse political systems operating in Africa, but they try to share their expertise and their experiences.

Jesuits also work in parishes all over the continent; there are many parishes.

You speak about the diversity of social and political contexts, and you travel the continent quite a lot visiting Jesuits in these various places. Many times Africa is seen by the rest of the word as a place where there are only wars and despots. However, when you live here, there is a very different view and outlook. What have been some of your experiences going into places where there is social-political upheaval and even, at times, war on the continent?
Soon after I had taken over this ministry civil war broke out in the Ivory Coast, and Abidjan is a place where we have one of our theologates. At one stage it got so bad that we had to leave and get most of the scholastics out of the place. Twice the theologate was attacked by bandits and robbed. On another occasion a rocket landed right on the gate of the institute; it was a very tense period. Some of the Jesuits were beaten up and could well have been killed. This all happened in 2011. But if you go to Ivory Coast or Cote d'Ivoire today, you would see a flourishing economy! There are still political difficulties, but they have been able to pull themselves out of that civil war and develop.

I think that’s what is interesting about Africa. There are these ongoing political problems and yet, to a large degree, they are being sorted out slowly. It will take a long time before we develop a suitable political system for Africa. My own view is that Western democracy and Western democratic systems don’t work very well in our situations, and we need to work at finding what is a more suitable and appropriate system for Africa.

In general my impression is that we have a huge problem around poverty and corruption. Now whether it is chicken-or-egg situation is another question, but certainly something needs to be tackled in that area. The Jesuits, in many places, suffer themselves from poverty and I think we have to look toward the international community of the Society of Jesus. A great deal of Africa’s resources are being taken out of Africa and used by other continents with very little recompense to the continent.

How easy is travel in Africa?
Travelling in Africa is very hard. It’s very expensive by air. It’s difficult by land. All of us get furious about the endless bureaucracies that surround the application for visas and obtaining visas—that is another area that is going to take a good number of years to sort out. The African Union (A.U.) has not been very good at setting up a system of cooperation among the countries.

That being said, by and large you can get to most places you want to go with a little bit of perseverance. More worrying are areas that have situations of civil unrest and war; South Sudan is a typical example. This worries Jesuit provincials a great deal because they have men who are in danger—their lives are in danger—and the usual scenario is that a Jesuit will not want to leave his apostolate or the people that he is working with in the event of war or civil troubles. The provincial, of course, is worried about the safety of his men and usually there is a bit of a tussle between them; there are many examples of this.

What has been the most striking thing for you as president of JESAM?
There is no doubt about it: Africa is alive and well and kicking! The church is vibrant and 25 percent of the population of Africa, which is now 1.2 billion, is under the age of 25. Africa is young, it’s got plenty of potential. The tragedy is that there are many gifted and intelligent people whose potential is not being used. I think that is what strikes me most of all.

Would it be the same in Madagascar?
Madagascar is a special case because it’s an island. It has a number of resources. It has a small population, relatively speaking; it’s about 22 million. It has a subsistence economy—agriculture is the main income for people. They have been bedeviled by political unrest, but it looks like it’s getting better.

Madagascar is a fascinating country because there Africa meets the East. There are the most wonderful genetic combinations there. The church is very French. It is notable that the first Jesuit saint in Africa comes from Madagascar: a French Jesuit who was killed in the 1980s for his faith, Jacques Berthieu.

What do you think is the biggest challenge that faces the Society of Jesus in Africa and Madagascar today?
My job is to coordinate the work of the provincials. The provincials look after provinces. I think, looking at all the provinces—of which there are nine provinces and two regions—the biggest challenge is the thinly spread population of Jesuits on the continent. A huge number are greatly overworked. On the other hand, in the Society of Jesus, we are one of the conferences that is growing—not spectacularly, but slowly. In the last 50 years we have grown 2.4 times, which can’t be said of anywhere else. That shows the life, vibrancy and faith of Africa.

Russell Pollitt, S.J., is director of the Jesuit Institute South Africa and one of America's Johannesburg correspondents.