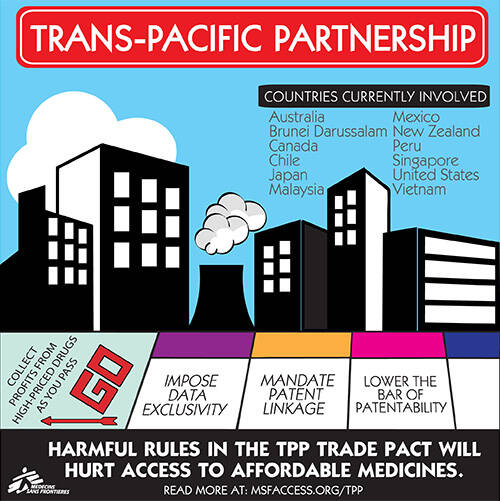 Probably not, but it may well prevent sick people in the global South from receiving treatment.

My colleagues in the labor movement have criticized the Trans-Pacific Partnership largely because some of the nations in this proposed new common market limit, repress or prohibit independent trade unions. It’s unjust that Vietnam forbids workers to form labor unions outside of the supervision of the communist government, and it’s unfair to American workers to force them to compete against workers who can be jailed for unsanctioned labor activity. The president has promised that the language protecting worker rights in the T.P.P. is more powerful than ever before, but that is small comfort. Proponents of every trade agreement, starting with the North American Free Trade Agreement, have promised much the same. A quarter-century after Nafta, Mexican workers trying to organize outside of the “official” trade unions still find it very rough sledding.

But this is hardly the only issue in the T.P.P. that has alarmed social justice advocates. In this week’s Commonweal, Fran Quigley of Indiana University discusses the unhappy relationship between modern trade agreements and access to medicines. In the 1990s, recently developed antiretroviral drugs began to save the lives of H.I.V.-infected Americans—but millions in Africa and Latin America were dying of AIDS because they could not afford the prices demanded by the patent holders. Brazil and South Africa yielded to popular pressure and announced plans to buy or produce unlicensed generic versions of the critical drugs. U.S. officials threatened trade sanctions, but in the event, American activists shamed the companies into waiving their patent rights in these hard-hit countries.

Will we see this sad tale replayed in a future epidemic in Vietnam or Malaysia? Intellectual property is always a high priority for American trade negotiators. But it’s one thing to go after knockoff Mickey Mouse backpacks or pirated copies of the latest Avengers DVD—and another thing to deny lifesaving medical treatment to the gravely ill in the global South.

The Vatican sees this issue clearly. Speaking on behalf of the Holy See, Archbishop Silvano Tomasi warned three years ago about “mega-regional trade agreements such as the Transatlantic Trade and Investment Partnership, or the Trans-Pacific Partnership,” and observed,

Among the most damaging concessions developing countries make in regional and bilateral agreements are those enhancing the monopolies on life-saving medicines, which reduce access and affordability and those that provide excessive legal rights to foreign investors, limiting the policy space for nations to promote sustainable and inclusive development.

Clayton Sinyai
Show Comments (
3
)
Comments are automatically closed two weeks after an article's initial publication. See our comments policy for more.
Lisa Weber
6 years 5 months ago
The monopolies and extended patents on lifesaving medicines here are bad enough. To hold poor people hostage is indefensible.
David Smith
6 years 5 months ago
TPP, CETA, TTIP, et al, Just in Time to protect Monsanto’s carcinogenic ‘Round Up’ Herbicide & other Toxic products & Foods; the Future of ‘Legal’ Poisoning of harmless Customers starts NOW. Taxes Increased as Gov’ts pass Lawsuit Costs to harmless citizens? Further Cuts to Gov’t. Services. TPP, TTIP, CETA, et al; If the 'Agreements' are anything other than a schedule of reducing tariffs then it’s not about ‘Free’ Trade but ‘Enslaving’ Trade; Shifting Corporate Liabilities on to the ‘harmless’ citizens? NON-RETURNING CONGRESSMEN using LOBBYISTS to SECURE POST POLITICAL JOBS Have to PASS TPP, TTIP, et al with IMPUNITY, &/or, for Future ‘Considerations’? Constituents to Pay for LOBBYIST’s Treaties/’Arrangements’, or, What are Various Ways Voters can Prevail upon the Secret Relationship between the Execs. of Political Parties & Lobbyists? TPP & the other Global Corporate treaties/'arrangements': Global AGRI-CORPORATIONs/Lobbyists SWEAR that some farmer may benefit. Do the other signatories of the global corporate treaties/’arrangements’ understand how corporate Canada is continuing to avoid its liabilities via its information deprivation (eg. The W.A.D. Accord & The MERKEL {Chancellor of Germany} Letter) & trying to pass its liabilities on to its global corporate associates, their citizens and the citizens of Canada? The ‘EMPIRE’* STRIKES BACK against Huge Indirect Taxes to pay for Secret Liabilities & Hidden Costs via Tribunal’s (‘Death-Star-Chamber) Punitive Penalties? *the ‘harmless’ citizens of the Anti-Global Corporate Economy Stockholders sue their neighbors & in-laws via their TPP, TTIP, CETA, et al, Global Corporate associates. TPP & Japan, et al; ‘The Submission’ to The Supreme Court of Canada paves the way for Expanding & Improving the basis of the Yamada led ‘Sword & Shield’ Counter-attack Suit against the Japanese gov’t., Corporates America & Canada, or, their ‘harmless’ citizens, et al. TPP & other Global Corporate Treaties/’Arrangements’ signatory Gov’ts. in Conflict of Interest. TPP & other Global Corporate Treaties/’Arrangements’ PREVENTING MULTI-BILLIONS of DOLLARS of LAWSUITS to be paid by the ‘harmless’ Voters/Taxpayers. OPPOSITION to TPP, TTIP, CETA, et al, REDUCES FEAR; "the (EU) Commission’s fear is a multi-million euro lawsuit from industry”* Why haven’t the Citizens of the Global Corporate economy been given enough info to balance the potential for Employment versus the amounts they will Certainty have to Pay for the Secret Liabilities & Hidden Costs of ‘Trade’ Tribunals’ Punitive Penalties (Indirect Tax), etc.? *** FULL article, ‘The ‘EMPIRE’* STRIKES BACK…’, see; davidehsmith.wordpress.com *** PLEASE CONSIDER SHARING the enclosed information & questions with 10 friends who will share it with 10 others...
William Rydberg
6 years 3 months ago
We need more reporting like this in America Magazine...