Why does Blair not defend the Church's record?

On Saturday the atheist polemicist Christopher Hitchens went up against former British prime minister Tony Blair in a debate in Toronto on the topic, "Religion is a force for good in the world'. Hitchens, his head shaved from cancer treatment, was in cracking form: outrageous, witty, and clever. Blair, who became a Catholic after leaving office in 2007, seemed way out of his depth, his only argument apparently being that people should focus on the good work of charities inspired by faith.

I have admired Blair, and frequently defended him from many in the Church who try to argue  -- on the fragile basis of his Government's record -- that his Catholicism is superficial. But reviewing his memoir for America, I was shocked to find that his faith seems to permeate almost nothing of his thinking.

Now, in the Munk debate, I see him refuse, time and again, to defend the Church's record against Hitchens's outrageous assertions. 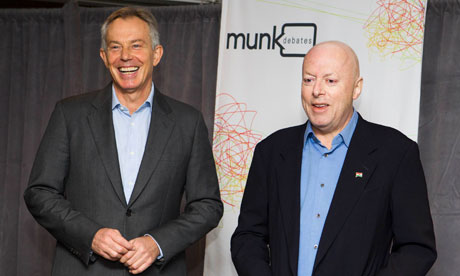 Take this section of the debate. Hitchens, making fun of Blair's repeated argument that the Church in Africa runs many charities, says:

If I was a member of a Church that taught that Aids was not as bad condoms, I would put some conscience money into Africa too ... But it won't bring back the millions of people who have died wretched deaths because of that teaching. This isn't done in the name of religion, as Tony Blair says, it's a direct precept, a direct practice and enforceable discipline of religion.

To which Blair responds:

Just because you can point to examples of prejudice and wrongdoing in the name of religion, that does not mean that prejudice and bigotry are wholly owned subsidiaries of religion. There are plenty of examples of prejudice against women and gay people and others that come from outside the world of religion. And the claim that I make is not that everything the Church has done in Africa is right, but let me tell you one thing it did do -- thew Churches together formed a campaign for the cancellation of the debt; they came together, they succeeded, and the first beneficiaries of the cancellation of debt were young girls going to school in Africa because for the first time they had free primary education. So I agree that not everything the Church or the religious communities around the world is right but I do say, at least accept there are people doing great work day in day out who genuinely not prejudiced or bigoted but are working with people afflicted by famine disease and povery, inspired by their faith.

It seems pretty clear from this that he thinks the Church's stance on Aids is bigoted and wrong; at least, if I had been in the Toronto audience, I would have concluded that. But it's astonishing that, after a week of endless coverage of this issue, Blair could avoid pointing out that "Aids is not as bad as condoms" has never remotely been an article of faith of the Church; and even if some self-appointed Catholic sheriffs have given that impression, the Pope's remarks this week have put paid to that idea in the most public way possible.

The result was 68-32 against Blair -- which, on the basis of his performance, seems a fair result.

Austen Ivereigh
@austeni
Show Comments (
4
)
Comments are automatically closed two weeks after an article's initial publication. See our comments policy for more.
david power
11 years 6 months ago
I agree with Jr Cosgrove on Atheists.Most famous atheists testify to how when they were young they solved the whole riddle of religion.There reasoning goes along the lines of "when I was eight I realized" etc.The pride in the precociousness of their insights seems to blind them to the probability that the mind of an eight year old might be missing a thing or two . Blair completely forgot what Faith is at the debate.I have never seen the guy argue convincingly about anything. Hitchens is being provocative.If we offered him  a really good vintage wine he would argue our side better than us. Chesterton would make mince-meat even of the great Hitchens.Sadly today we have very few who have that quality of mind in the Church.An appeal to mystery would be a better tack.Lorenzo Albacete would be great at that end.
11 years 6 months ago
Christopher Hitchens has debated a lot of Christians.  He had a few with Dinesh D'Souza.  Just 10 days ago he debated William Dembski on the Topic ''Does a Good God exist.''  I think it is just as much of a way for him and the others to make some money as well as put out their point of view.


Hitchens is especially resentful of the Catholic Church since his mother committed suicide in a lover's pact with a fallen away priest in an Athens hotel several years ago.  He is an extremely talented person and one wonders what he would have written or accomplished if he used his talents in other directions.  It seems that one who is especially gifted with words uses it to attack all the time as opposed to uplift.


His brother, Peter, is religious and an Anglican.  He is also a renowned writer in the UK and I wonder if he will be more remembered in 50 years than Christopher.


http://en.wikipedia.org/wiki/Peter_Hitchens
11 years 6 months ago
1. He is a politician, in the Clintonian mold.  I heard him a few times speak at Yale when I was there, and I would say anyone wanting a politician of any persuasion to the defend the faith is a bit like hoping for a match to strike in a wind storm.  (Even Henry had Thomas More to fall back on.)

I have to disagree.  Atheists are generally intellectually bankrupt.  They never let the argument get close to the basis of their beliefs which is based on faith.  When they are pressed, they resort to blind faith.  Interesting phenomenon.