Why Did Mother Mary Clare Millea Succeed? Looking Back at the Apostolic Visitation 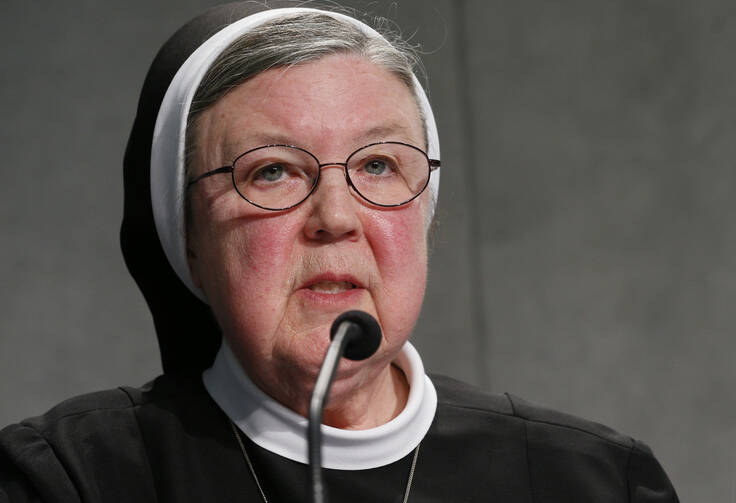 Maybe Mother Clare Millea benefited from the low expectations that come with an impossible task. Whatever the case, the nun who heads the Apostles of the Sacred Heart of Jesus pulled off the apostolic visitation of all active nuns in the United States with a sense of aplomb and fairness. Kudos came from many places, including media that stood ready to pounce if anything seemed unfair.

So why did Mother Clare succeed despite predictions she would flame out?

Could it be that her success came because she is first of all a woman? I don’t wish to sound stereotypical but I think the answer lies in the fact that, as the final report said, she opted for a “sister-to-sister” dialogue. She didn’t go into the discussion with her mind made up. She sought information, not victory. This was no power trip to prove who was in charge.

She consulted many people, both women and men, and people likely to agree with her philosophically and those expected to disagree. It came as no surprise that orders being investigated were not open to paying for it. Thus she took on the arduous task of finding funders and did so, though many people, including church officials, were not throwing money at her. As a woman, she figured out how to do the study on the cheap. No need to have meetings at top-of-the-line hotels when a religious house might be found. The point was to meet, not to party. Word soon spread that the investigation seemed fair.

When many orders balked at providing financial information and the sisters lawyered up, the requirement to provide financial data was taken off the table. Legal concerns did not threaten Mother Clare, a graduate of Rome’s Lateran University and a canon lawyer herself. It certainly would be absurd for the church, which has its own body of law, to get antsy when the nuns sought legal advice.

The investigation may have come at the request of people unhappy with reforms of congregations of religious women adopted at the instruction of the Second Vatican Council. The apostolic visitation was described euphemistically as a “look into the quality of life of religious women in the United States.” Mother Clare listened to all, including those who have never stopped criticizing women religious since they implemented changes called for by the Second Vatican Council. These people had their say, of course, but so did some 60,000-plus ordinary folks who demonstrated for the nuns and signed petitions in their favor. Ultimately the study found that the sisters were doing a stellar job despite a crippling loss of members, weakened finances and other societal developments post-1960 that opened other places than religious life to serve, such as VISTA and the Peace Corps.

In her visitations Mother Clare found common concerns, the most important being vocation recruitment and retention, a high priority for members of both the Leadership Conference of Women Religious, considered a progressive group whose members include leaders of 80 percent  of the nuns, and the Conference of Major Superiors of Women Religious, whose leaders come from the remaining 20 percent. She was not pie-in-the sky with hopes for bringing together the two organizations that represent women religious. She said tactfully in her report that “some religious also expressed a desire for increased communication and collaboration between the two conferences of women religious in the United States.” It would be nice if they came together but that does not have to be. There is room for both in the church.

The final report commented on the role of women in the church and suggested there will be efforts to promote them. Media seem to have ignored this.

“It will certainly be of interest to all that Pope Francis has asked” the congregation for religious “in close collaboration with the Congregation for Bishops, to update the curial document Mutual Relations regarding the collaboration among bishops and religious, in accord with the church’s resolve to foster the ecclesial communion which we all desire,” the final report said.

Perhaps it was just a nice thing to say. But it might also be true. It also might solve the vocations challenge. Today’s young women do not want to align themselves with organizations, ecclesial or otherwise, that create glass ceilings. The women want to use their talents for good. The church certainly provides an option for that.

If there ever has been a real live argument for the need for more women to participate in church governance and for their ability to do so, the apostolic visitation by Mother Clare provides it.