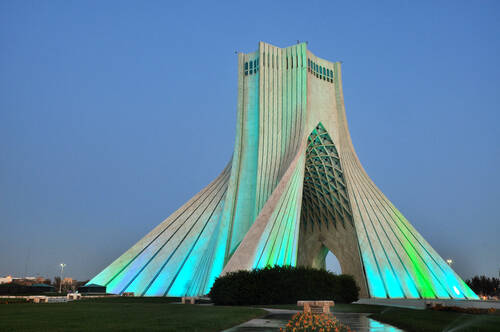 After decades of the United States and Iran demonizing the other, it is a welcome development that the two countries are sitting down to negotiate differences over Iran’s nuclear program and may be within reach of a settlement. Will they be allowed to make it, or will Israel’s Prime Minister Benjamin Netanyahu and his cheerleaders in the U.S. Congress—they of the 29 standing ovations for Netanyahu when in 2011 he addressed Congress—derail efforts to reach an agreement?

Many of the lawmakers who recently sent a letter to Secretary of State John Kerry expressing their reservations about a deal between Iran and the United States and its P5 + 1 partners in the talks are willing pawns of the pro-Israel lobby in this country. The lobby takes its talking points from Israel, and Israel is loath to accept any peaceful resolution of the long-standing impasse over Iran’s nuclear program that does not attain its maximalist demands. One could wonder how a country that is known to possess nuclear weapons, possibly as many as 400, but is not a signatory to the Nuclear Non-Proliferation Treaty could possess such influence on this issue. But, in fact, Israel and its American lobbyists here have enormous influence over our Congress, which is why President Obama and Secretary of State Kerry went begging to Congress this week to retain the authority to deal with Iran. They have pointed out that stiffening the already draconian sanctions imposed on Iran is not likely to encourage Iran’s leaders to further negotiations.

This seems an obvious point, but many in our Congress seem to believe that we can’t punish our enemies enough. Should one seek to arbitrate an outstanding dispute, our members of Congress want to tighten the screws and give the other party a kick, just to make sure everyone knows who’s on top and who’s on bottom. Why? One could say, with some justice, that Iranians have far more reason to hate us than we have to hate them. They haven’t deposed any of our elected leaders (unlike our toppling of Mohammad Mossadegh in 1953), nor do they threaten our leadership today, nor have they waged economic war on the United States, as we’ve been doing against them for the past half-dozen years.

There is often something ugly in the way the United States engages with its enemies, particularly those not truly threatening to us such as Iran. The exaggerated statements about the unique danger of Iran’s nuclear program, the hyperbole about Iran’s threat to Israel, a threat that has been overstated, misrepresented and manipulated yet rarely is challenged, the hype and hysteria manufactured to convince the public of the putative danger posed by Iran all go towards creating smoke but not light on the issue.

At some point, doesn’t there need to be an honest discussion about nuclear hypocrisy? How long can the United States and other nuclear powers deny emerging countries nuclear weapons if the nuclear powers won’t divest themselves of their own nuclear weapons? Obama has proposed some reductions to the U.S. nuclear arsenal, which is encouraging, but according to the nonpartisan Nuclear Threat Initiative, the five nuclear powers have continually refused to engage in multilateral talks on disarmament.

And a second question: Israel fears losing its nuclear hegemony in the region if Iran or another country there acquires nuclear weapons or has the ability to make them. How bad would it be for Israeli security if it were to lose its nuclear supremacy? For years the countries in the Middle East and the International Atomic Energy Agency have urged a nuclear-free zone in the Middle East, but Israel and the United States have resisted. Could the creation of a nuclear-free zone ultimately be a good thing for Israel as well as the region?

Margot Patterson
Show Comments (
3
)
Comments are automatically closed two weeks after an article's initial publication. See our comments policy for more.
Vincent Gaitley
9 years 2 months ago
Demons? Just call them by what their active self made political profile demands: State sponsors of terrorism. Otherwise just another bunch of charming peace loving and misunderstood folks. Actually, the real question is why are you demonizing Israel? Who's a "willing pawn"? Name names, please. We Americans are pro-Israel because they are our natural allies and a nation under constant threat. Who are the anti-Isreal lobby, then? Oh, that's right--enemy nations. Iran demonized us, not the other way around. Am I mistaken or do I remember those 444 days of peace by hostage taking back in 1979? And that "revolution" was the beginning of all this cheery bomb building and happiness in Tehran. Ah, the Iranians. What kidders. Come home boys, all is forgiven. Build your nuclear weapons. Give them to your neighbors. Use them together, use them in peace.
Stanley Kopacz
9 years 2 months ago
It is stated in the blog post that the democratically elected president of Iran, Mossadegh, was overthrown by the CIA in 1953. This was engineered by Kermit Roosevelt, the grandson of Theodore. We put in his place the Shah, an oppressive tyrant. This was done for the sake of British oil interests. We destroy democracy when it doesn't suit the financial interests. Promoting dictatorship and not democracy eventually blows back as it did in Iran in 1980. Although I think establishing nuclear power plants anywhere is a really bad idea, I don't think Iran is better or worse than any other average self-interested nation. I would prefer Iran had nukes and North Korea didn't.
Gabriel Marcella
9 years 2 months ago
"At some point, doesn’t there need to be an honest discussion about nuclear hypocrisy? How long can the United States and other nuclear powers deny emerging countries nuclear weapons if the nuclear powers won’t divest themselves of their own nuclear weapons?" Let's not fool ourselves. Having nukes is not an equal deployment opportunity program, nor should it be.There are some 17, 325 nukes, according to the Center for Arms Control and Non-Proliferation. The US, Russia, UK, France, China, India, Pakistan, Israel, and North Korea have them. The world would not be safer if more countries joined the club. Moreover, conventional high precision weapons are making the use of nukes even more unthinkable. On "nuclear hypocrisy," few, if any, countries want nukes; they're expensive to build, you need a delivery system, and then you face the problem of causing counteractions by neighbors who feel threatened, leading to proliferation and perhaps conflict.