Who will be held accountable for the death of Tamir Rice?

Who will be held accountable for the death of Tamir Rice? 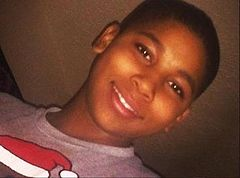 Tamir Rice was an innocent child killed by Cleveland police. He was not threatening anyone when he was shot; he was playing in a park wearing a toy gun. For those who regard his death as a tragic accident, it was not an isolated one. According to a data base The Guardian newspaper began compiling this year of people killed at the hands of police, 1,126 persons were killed in 2015, 216 of whom were unarmed.

More than a thousand people dead because of lethal force used by law enforcement is an epidemic of violence. Comparing fatalities in this country with those in others, The Guardian found that the police in the United States kill more people in a few days than are killed in an entire year, or sometimes in decades, in other democratic, developed countries. According to Amnesty International, laws in all 50 states regarding the use of lethal force by law enforcement do not meet international human rights standards.

Fewer than a dozen states require police officers to give a verbal warning before shooting. In 12-year-old Tamir’s case, less than two seconds passed between the time police said they shouted at him to put down his pellet gun and the time he was shot. Witnesses at the scene said they heard no warning.

How do we go about changing a culture of violence among the police, one that has been allowed to flourish by the public’s willingness to turn a blind eye to it? Certainly not by declining to prosecute police officers for reckless, negligent or brutal behavior, yet prosecutions of police officers are rare and when they do occur the sentences meted out are light.

Not serving on the Cleveland grand jury, I can’t say that its decision not to indict the policeman who killed Tamir was wrong, but the message it seems to send, the one that will be received, is that the police are not accountable for the mistakes they make, even when they are fatal ones. Coming on top of the casual inhumanity shown to Tamir’s sister and mother at the time of the killing and the protracted year-long investigation of the circumstances of his death, the impression conveyed is that lethal, badly botched policing carries no consequences. Trigger-happy police officers who shoot first, ask questions later, will not have cause to think twice.

The pass law enforcement officers habitually get from the public is often justified in terms of the risks they run to ensure public security. They undoubtedly do face danger, but perhaps not as much as people assume. Data compiled by the Bureau of Labor Statistics indicate that policing does not rank among the 10 most dangerous occupations in the United States. The riskiest jobs, those with the highest fatalities, are held by loggers, roofers, fishing workers, airline pilots and flight engineers, trash collectors, mining machine operators, farmers, ranchers, electric line installers and repairers and construction workers. An individual is more likely to die in any one of those jobs than in the line of duty as a police officer.

The immense authority given law enforcement, the reluctance of the public to question it even in suspicious circumstances, the shielding of abusive officers by their colleagues and superiors and the inattention to complaints about police misconduct bring to mind the clerical sex abuse scandal within the church. Both situations involve a betrayal of public trust, with abuse directed against the most vulnerable and powerless. In the case of the police, it’s directed at black men in particular, with unarmed black men more than twice as likely to be killed by police as other Americans.

One can hope that the worst of the clerical sex abuse scandal is in the past, but the attention to police violence that began 16 months ago with Michael Brown’s death in Ferguson, Mo., is probably still in its infancy. The dimensions of the problem it highlighted are not even clear yet due to a lack of reliable data on how many people die at the hands of police, one reason The Guardian began its project The Counted in June. Even with the recent passage in Congress of the Death in Custody Reporting Act, there are large hurdles to accurate reporting, logistical obstacles that go beyond the task of eliciting data from 18,000 law enforcement agencies. In October the Department of Justice began a pilot project to collect data on police-involved deaths using similar methodology to The Guardian’s crowd-sourced investigative project. Already that project has discovered that the government has seriously under-reported the number of police-involved deaths in previous years.

Tamir Rice’s tragic death doesn’t fit a neat schema of police terrorism or brutality. Cuyahoga County Prosecutor Tim McGinty called it a “perfect storm of human error” but one that did not indicate criminal conduct by the police. Many will disagree, as do Tamir’s family. They have called for the Justice Department to review Mr. McGinty’s role in the grand jury, which they believe he manipulated. (He has acknowledged telling the jury he doubted the officers who killed Tamir could be convicted if they were put on trial.) They have also filed a wrongful death suit against the city of Cleveland and the two police officers involved, who they say acted “unreasonably, recklessly (and) negligently.”

Civil suits against the police that end with taxpayers footing the bill for police misconduct have been largely ineffective in spurring police reforms. But since the announcement of the grand jury decision on Monday, protests against it are reigniting conversation about the flaws in the grand jury system, particularly the dominant role played by the prosecutor. Protests and other forms of public pressure, along with media investigations like The Counted, may be the only way to bring some measure of justice to Tamir and other victims of police violence. Even if not easily prosecuted, the police can still be fired, as can prosecutors and politicians complicit in police misconduct. An outraged citizenry protesting excessive use of force by the police and demanding reform may be the best and only way to get it. Can those pressing for change keep it up?