Who Are We to Judge? 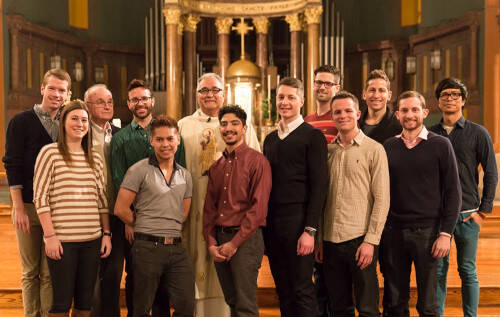 It might be tempting, in certain subcultures of the United States today, to think that LGBT existence is the new normal—especially among those who don’t identify as LGBT themselves. Legislation and court decisions allowing gay marriage are spreading. One by one, religious organizations are reversing their objections to queer identity. A question uttered by Pope Francis—“Who am I to judge?”—has been drawn from its particular context and taken by some as a kind of carte blanche to overlook decades of Vatican resistance. Attempts to opt out of this trend by asserting religious freedom prompt outrage. Those opposing the embrace of LGBT identity in the church are increasingly claiming the posture of persecution.

The ambivalence of the present situation finds expression in a new short film produced by the Out at St. Paul group at the Church of St. Paul the Apostle in Manhattan. “LGBT Catholics: Owning Our Faith” was conceived as a response to Pope Francis’ call for reflection on behalf of the Synod on the Family process. Fr. Gilbert Martinez, the pastor of the parish, reports that he personally delivered the video into the hands of the pope.

What the expertly crafted film leaves one with is not answers or proposals but a series of circumstances and voices and experiences. One of its subjects accepts what she understands to be the church’s teaching on homosexuality, for instance, while another calls it “discrimination.” A mother, father and grandmother describe what it meant when their children came out to them. One man still can’t bear to tell his pious, Mexican-American grandmother. Yet the visual effect of the short is one of the basic dignity, relatability and respectability of those portrayed. As in Hillary Clinton’s recent video announcing her candidacy for president, LGBT lives are portrayed within the normal fabric of American society.

During an event at St. Paul’s last Sunday celebrating the video’s release, Fr. Patrick J. Conroy, the chaplain of the U.S. House of Representatives and a Jesuit, said, “I think it’s an exciting time to be a Catholic.” He had in mind the adventure of coming to terms with LGBT experience, both in doctrine and in pastoral life. But he also sounded a somber note: “Gays and lesbians are being legally killed,” he said.

Fr. Conroy didn’t offer further explanation. But his fellow panelist, Mateo Williamson, who also appears in the film (and an extended interview here), said more about the darker sides of LGBT life in America. Mr. Williamson talked about his work at a New Jersey homeless shelter, where the people he serves are disproportionately LGBT youth of color. In an essay for Dignity USA’s journal Quarterly Voice, he describes a troubling contradiction:

The shelter where I work is funded largely by the Catholic Church. The irony of this—at times too painful to bear—is that I frequently speak with young people who have been rejected by their family and from their homes, in part resulting from interpretations of Catholic doctrine and heated rhetoric regarding homosexuality from their official religious leaders. Can you imagine what our shelter would look like if every LGBT child were accepted by their families in all of their inherent beauty? Nearly half of the beds in our building would be empty.

I first got to know Mr. Williamson while reporting a story for Al Jazeera America about a Catholic sister with an underground ministry in the transgender community. Mr. Williamson is transgender, and he talked about his friendship with the sister as helping to save his life from the high suicide rate that plagues the transgender Americans. For him, coming out while in college coincided with returning to the Catholic faith of his family and childhood. Like many transgender Catholics I’ve interviewed, he has experienced coming to terms with his identity as a spiritual journey. In this sense, it is partly by still being so far from normal that LGBT lives become a precious revelation and witness. I am a straight, cisgender male, but getting to know transgender Catholics was a crucial step in helping me mature as a convert in the church. Their struggles guided me through my own struggles, and their faith rubbed off on mine.

Consider the courage of Mr. Williamson, who, not long after coming out and returning to church, requested a meeting with his local bishop at the time. He was granted one. Before the bishop, he told his story and, especially, described the crisis among LGBT homeless youth. “Talking to the bishop was frightening,” he told me. “He didn’t say much, until the very end, and that’s when I realized that he had heard me, and that he understood what I was saying.”

But hearing was different from doing. Mr. Williamson continued:

I realized at the same time that he would have very little power, even as a bishop, to help any of us—even though we were Catholic and we were suffering because of the Catholic Church’s teaching and the things that were coming from the hierarchy. Even if he wanted to help us, to make a statement of love and support, or to start a ministry to help people like us, there would be a backlash from a lot of really important Catholics and people that fund them.

“Owning Our Faith” is not merely a contribution to debates over natural law or ecclesiology. Those are worthy undertakings, but something more immediate is at stake. This act of fostering the impression of normalcy, of grasping at respectability, is a means of survival.