White Catholic Climate Denial is a Crisis Waiting to Happen 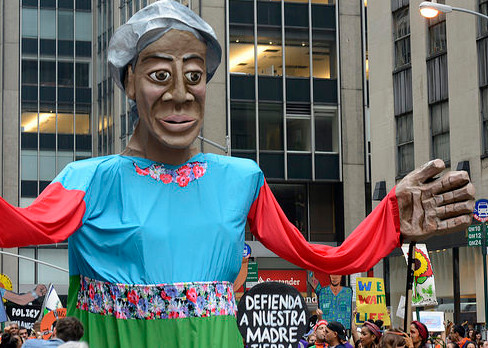 It’s a common caricature that climate change is a boutique cause, a kind of luxury that concerns only those who can afford a new Prius. A lot of the most visible faces in the climate movement—Al Gore, Bill McKibben, Naomi Klein—imply a demographic that is white, affluent, and seemingly removed from the real problems that ordinary folks face. The make-up of environmental organizations reenforces this profile, which climate deniers frequently employ to turn people's attention away from rising temperatures and billowing emissions. But it turns out to be nonsense.

Last month, the American Academy of Religion and the Public Religion Research Institute released a report on how people in the United States perceive the prospect of climate change, with a particular focus on religious identity. Its findings highlight a striking divide among Catholics: Among the eight major religious groups measured, Latino Catholics rank at the very top in their degree of concern about the climate—73 percent are very or somewhat concerned—and white Catholics are second to last at 41 percent.

There is also a homily divide. The same breakdown holds among those asked how often their clergy discuss climate change: Latino Catholics in the lead, white Catholics dead last. And preaching matters. The report found that those who hear clergy speak regularly on the subject are 13 percent more likely to believe that climate change is real and, as the scientific concensus holds, caused largely by human activity.

People with active spiritual lives tend to be more concerned about climate change. But even when religion is off the table, Latinos and black Americans are both more than twice as likely than their white neighbors to believe climate change will affect them. Not surprisingly, those groups most on the receiving end of the U.S. economy are also most troubled by the environmental damage it exacerbates.

When I spoke with the report’s lead author, Robert P. Jones, CEO of the Public Religion Research Institute, he credited the interest of Latino Catholics in climate change to their ongoing contact with communities in poorer countries that experience the impact firsthand. Sixty-two percent of Latinos fear the effects of climate change in poor countries, compared to only 49 percent of white Americans. The Catholic climate gap, it seems, may be a gap of knowledge and of solidarity.

The denialism that still enchants the majority of white Catholics—and their clergy—is about to lead them into a serious dilemma. Pope Francis is preparing to release an encyclical on climate change in the coming year. It’s about to get far less easy to sit respectably in the pews while ignoring the science and the mounting cost of the carbon economy for vulnerable communities and the natural order. For those holding out in the denialist reverie, now might be a good time to consider waking up.

Nathan Schneider
@ntnsndr
Show Comments (
3
)
Comments are automatically closed two weeks after an article's initial publication. See our comments policy for more.
JR Cosgrove
6 years 3 months ago
Maybe Mr. Schneider is the one in denial. For a lucid explanation of the issue see the videos by William Happer, a physicist at Princeton. https://www.youtube.com/watch?v=HCDOf8Khiko https://www.youtube.com/watch?v=ap6YfQx9I64 Is increased CO2 actually a boon for mankind? Will there be more food and forrest land available due to this? Interesting point of view. Are Catholics who support the AGW on the wrong side of the issue. After all, the restrictions recommended by the AGW will hurt the poorest in the world.
Nathan Schneider
6 years 3 months ago

I've been intrigued by this argument over the years—that perhaps it would be better and more cost effective for the poor to adapt to the impacts of rising CO2 levels rather than to stem the causes. However, I've come to seriously doubt it. Of course, in a complex transformation like climate change, one cannot entirely predict what will unfold, but there are increasingly strong indications that it will not be good for the poor. The UN came to this conclusion in a report earlier this year, as has the U.S. government. As the concern of Latin@s cited above suggests, the effects area already being felt around the world—in the form of droughts, crop failures, floods, and other "natural" disasters. Take a look at those reports for details.

Further, I think it's important to consider also our biblical responsibility for stewardship of creation. As Elizabeth Kolbert has documented, climate change is already causing a mass extinction of non-human species that should be reason for deep concern for anyone in love with their creator. Throughout the planet's history, it's true, species have come and gone, but never as a direct consequence of human stewardship. This, along with the impact on human beings, amounts to a profound moral crisis.

Susan Wilcox
6 years 3 months ago
I'm so thankful for all the Catholic groups working to prepare our hearts and minds to address the Pope's encyclical such as Franciscan Action Network https://franciscanaction.org/; Catholic Climate Covenant http://catholicclimatecovenant.org/; and Sisters of Earth http://sistersofearth.wikispaces.com/