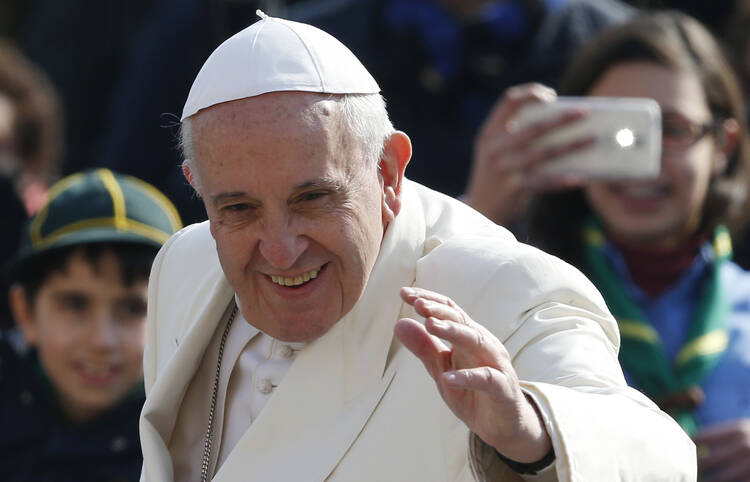 At last count, seven Catholics are running for president — six Republicans and a Democrat. But surprisingly, the candidate who’s talking about Pope Francis the most often is a Jewish guy from Vermont.

This past February, Sanders delivered a remarkable 15 minute speech from the U.S. Senate floor, built on an anthology of Pope Francis money quotes on signature issues of his pontificate: poverty and economic injustice. The hook? The invitation for Pope Francis to speak to Congress. Sanders opens with a nod of gratitude to (Catholic) House Speaker John Boehner, declaring, “I do not agree with the Speaker of the House John Boehner on very much. But I do agree that it is an excellent idea for there to be a joint session of Congress in the fall to hear from Pope Francis.”

Sanders then praises Francis for his “great courage in raising issues that we rarely hear discussed here in the Congress,” and begins reciting a litany of Francis quotes, remarkable for their poignancy and for the breadth of sources they’re drawn from. There’s a speech Francis delivered in the first couple months of his pontificate to newly appointed Vatican ambassadors, which declares, “The worship of the golden calf of old has found a new and heartless image in the cult of money and the dictatorship of an economy which is faceless and lacking any truly humane goal.”  Next, a stark line from a general audience on UN World Environment Day, 2013: “Man is not in charge today, money is in charge, money rules,” Then, Francis’ critique of trickle-down economics from his apostolic exhortation, “The Joy of the Gospel.”And it just keeps rolling.

To be precise, Senator Sanders’s speech was delivered several months before he officially threw his hat into the presidential ring. But since then, Candidate Sanders’s papal quoting has only gained momentum. One of America’s summer interns, Rob McCarthy, pointed out that on his official Senate twitter account, Sanders has tweeted a Pope Francis quote every single Sunday since May 24. (Save one…he missed June 7.)

Take a look at a couple of examples. You’re forgiven if you mistake Sanders’s feed for @Pontifex’s own.

.@Pontifex: While the income of a minority is increasing exponentially, that of the majority is crumbling. pic.twitter.com/u0FQjG0Vzk

Though second place counts for not much in political races, another non-Catholic candidate has also been name-checking Pope Francis. John Kasich, an Anglican who’s also taken to referencing Francis in recent interviews, and appears to have channeled the pope in comments this week on poverty.

Taking my cue from Senator Sanders, I agree it’s an excellent idea for Congress (and the candidates) to hear from Pope Francis.

What quotes from Pope Francis do you want to see candidates tweeting and working into their stump speeches?

Jeremy Zipple
@jzipple
Show Comments (
9
)
Comments are automatically closed two weeks after an article's initial publication. See our comments policy for more.
Michael Andreola
6 years 12 months ago
How about this one: “Among the vulnerable for whom the church wishes to care with particular love and concern are unborn children, the most defenseless and innocent among us. Nowadays efforts are made to deny them their human dignity and to do with them whatever one pleases, taking their lives and passing laws preventing anyone from standing in the way of this."
Nicholas Cotroneo
6 years 11 months ago
The moral center of the right to life movement is the best launching pad to get others to agree that the current economic system needs to be "adjusted" to fix the very real issue of inequality. Mr. Sanders has no such center. Church leaders and others who support Mr. Sanders do so at their own peril. Anyone who tries to fix income equality on purely secular terms will only shift the deck chairs around of who will have seemingly uncontrollable power. Economic resources have to be allocated somehow. Capitalism can be controlled if attacked from the right angle.
Michael Andreola
6 years 12 months ago
And this: "Religious freedom is not just a matter of thought or private devotion," the Pope said June 20, 2014. "It is the freedom to live -- both privately and publicly -- according to the ethical principles that are a consequence of the truth found."
Tim O'Leary
6 years 11 months ago
Sanders has a 100% positive rating from the abortion group NARAL and is an avowed atheist. His view of women is/was also quite different from the Holy Father - http://www.washingtonpost.com/news/morning-mix/wp/2015/06/01/so-you-might-not-want-to-read-bernie-sanderss-43-year-old-sex-column/. So, his selective quoting of Pope Francis might only mean he wants to co-opt the pope for his socialist agenda. Lenin and Castro might have done the same. It doesn't mean he wouldn't be very hostile to Catholics in office.
Dan Hannula
6 years 11 months ago
Well, the Pope isn't perfect.
Chuck Kotlarz
6 years 11 months ago
Perhaps other historical figures, if alive today, would also quote Pope Francis. "These capitalists generally act harmoniously and in concert, to fleece the people."  - Abraham Lincoln. “Herbert Hoover once ran on the slogan, “Two cars in every garage”. Apparently, the Republican candidate this year is running on the slogan, “Two families in every garage”.” - Harry Truman
Mike Evans
6 years 11 months ago
"Who am I to judge?" would be at the top of my list. It touches all issues: immigration, racism, power vs. poverty and inequality, anger with social programs and recipients, women's situations, health care, employment and living wages, etc. Do any of these so-called Catholics really understand the preferential option for the poor or working for the common good or becoming real instruments of peace? Inquiry class is now open...
MaryMargaret Flynn
6 years 11 months ago
No surprise. I have his bumper stick on my car right next to the bumper sticker say--with this Pope, I have Hope.
Henry George
6 years 11 months ago
Perhaps I have completely misunderstood Christianity and Heaven. If I get to Heaven and I meet you and you were one of my employees that I purposively paid minimum wage, made work long hours and provided no health-care - all the while paying myself an enormous salary so I could own three homes and fancy cars and take long expensive vacations and I fired you as soon as you got sick and did nothing to help you child who had a life threatening illness - why would it be Heaven for me ? If I did not love you, or at least attempt to love you during this life on earth, why do I think I will suddenly love you in the afterlife ? Love does not prove itself when there is an abundance but when others are starving and have no place to live. The massive lack of simple charity among Catholics/Christians for our fellow humans is staggering - why do we presume - as you often hear at funerals - that the deceased is now in Heaven - when he may well be in Purgatory learning how to actually love those he so ignored in this life.