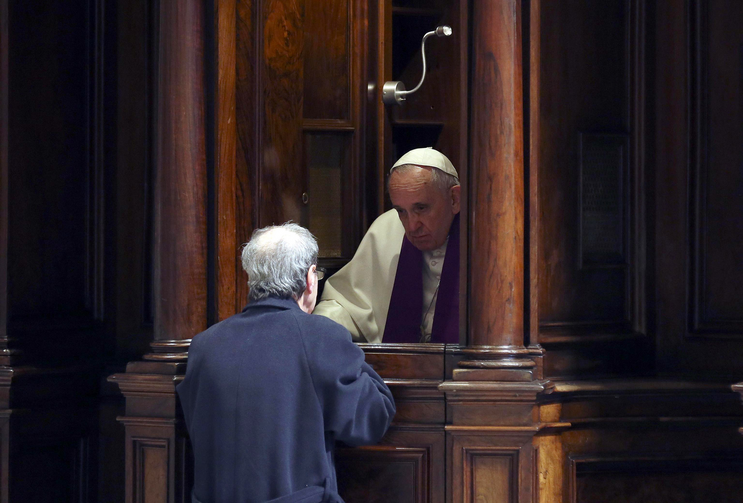 If there has been one overarching theme of Pope Francis’s papacy it is mercy. Almost immediately, he began preaching, “that this is the Lord's most powerful message: mercy.” The boundless love of God has been his clear and constant first message. And so it is a bit shocking to see the pope accused of being unforgiving on the opinion pages of the New York Times.

As the Jubilee Year of Mercy approaches, Pope Francis issued direction to “to enable the celebration of the Holy Year to be for all believers a true moment of encounter with the mercy of God.” In the note, he goes through a list of communities who are often excluded or find it difficult to experience forgiveness. Within this context he expresses concern for the homebound and prisoners, each experiencing barriers to experiencing forgiveness within the community. Yet, Francis is not being accused of being unforgiving towards prisoners. As one would expect in U.S. culture, it is the mention of abortion that earns Francis the disdain of Jill Filipovic in her recent op-ed. According to Filipovic, Pope Francis isn’t exhibiting mercy towards women, but cruelty.

What did Francis do that is so awful? He removed any restrictions that may exist in some diocese in the global church on who can hear confessions and offer absolution on abortion because, “The forgiveness of God cannot be denied to one who has repented, especially when that person approaches the Sacrament of Confession with a sincere heart.” Now abortion is always an attention grabber, but this doesn’t change the practice in the United States, which already allows priests to absolve the sin of abortion. While many have embraced the idea that we begin with mercy not condemnation, Filipovic is angry that the pope still insists that abortion is wrong. It is not surprising then that she does not understand the Catholic position on abortion, sin or mercy.

Complaint #1: By saying he understands the intense and difficult situations that lead women to resort to abortion, Pope Francis reduces women to victims.

When Francis states, “I am well aware of the pressure that has led them to this decision. I know that it is an existential and moral ordeal. I have met so many women who bear in their heart the scar of this agonizing and painful decision. What has happened is profoundly unjust; yet only understanding the truth of it can enable one not to lose hope.” Filipovic accuses him of turning women into victims.

Over the last four years, Pope Francis has developed a strong cultural critique of a throwaway culture that values profits and status over people and excludes those who are not considered useful. This tyranny of money, he recently said, is holding the family hostage and he has praised single mothers who bravely struggle to raise their children. The United States does not have guaranteed paid maternity leave, still has a significant problem with pregnancy discrimination, a serious lack of access to affordable childcare—it is not a society that is welcoming and supportive of women and children. I suspect if Pope Francis was showing compassion to single mothers constrained by the minimum wage, lack of paid sick leave and the inability to find affordable housing, Filipovic would be cheering his recognition of the way social structures constrain the full flourishing of women.

Why not here? Because, Pope Francis still believes that abortion is morally wrong and Ms. Filipovic doesn’t. It is ironic that in an effort to insist that the real guilt and stigma comes because people don’t support a woman's choice to have an abortion, she minimizes the experience of women for whom abortion is experienced as tragic and complex. She falls into the trap of which she accuses Francis—reducing women’s experience to fit her ideological position.

We are all sinners. There is no human being alive who is not a sinner. This is a basic tenet of Christianity. When asked ‘Who is Jorge Mario Bergolio?,’ Francis answered, “I am a sinner. This is the most accurate definition. It is not a figure of speech, a literary genre. I am a sinner.” It explains why upon walking out onto the balcony of St. Peter’s, the new Pope Francis asked the thousands of pilgrims present to pray for him before anything else.

Yes, Roman Catholicism makes a clear and unequivocal judgment that abortion is morally wrong. There is no sugar coating that for someone unapologetic in her insistence that abortion is a perfectly fine choice. Pope Francis is not going to come out and say that abortion is anything other than a grave tragedy and moral evil. But sin does not have the last word for Francis. Nothing is more powerful than the love of God and the experience of this is the clear mission of the Jubilee of Mercy. It takes some serious twisting of terms to turn that message into cruelty.

Complaint # 3: This is all a public relations cover for the church’s global anti-contraception, anti-abortion crusading.

After spending most of her op-ed arguing that abortion is another normal reproductive choice for women and against Pope Francis’s treatment of it as a sign of tragedy or moral complexity, the author uses as her example an extreme and controversial case of a child who’d been raped in Brazil. Absolutely every aspect of that case is horrifying. What I want to challenge is the claim that Pope Francis is engaging in one elaborate PR move to somehow hide the real agenda.

In "The Joy of the Gospel," after reaffirming the church’s unwavering belief in the sacredness of all life, including the unborn, Pope Francis acknowledges the failures of the church to sufficiently accompany vulnerable pregnant women. He states “it is also true that we have done little to adequately accompany women in very difficult situations, where abortion appears as a quick solution to their profound anguish, especially when the life developing within them is the result of rape or a situation of extreme poverty.” This week he stated that priest’s who do not show mercy do not belong in ministry and the confessional.

Pope Francis is not perfect. He would be the first person to insist he is not perfect and is in fact a sinner, like the rest of us. He has rightly been critiqued on some issues of women and gender. What he cannot be legitimately accused of is cruelty or of using God’s mercy as a weapon. From start to finish this op-ed twists Catholic theology to fit an ideologically based position—abortion isn’t wrong therefore it’s illegitimate to talk about mercy.

Meghan J. Clark is an assistant professor of moral theology at St. John’s University, Queens, N.Y. and the author of The Vision of Catholic Social Thought: The Virtue of Solidarity and the Praxis of Human Rights (Fortress Press).