Renegade priest in 1960s Los Angeles: what ever happened to William Dubay? 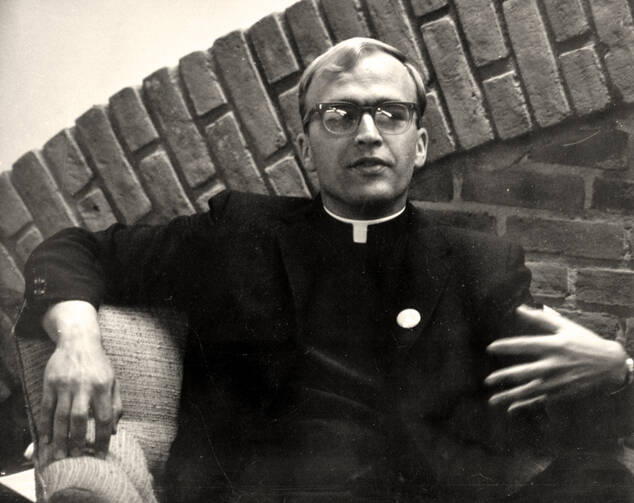 Each week, a big pile of books comes across my desk. Very rarely, however, does one rock me back in my chair.

Recently it was William H. Dubay’s The Priest and the Cardinal, Race and Rebellion in 1960s Los Angeles. In the tumultuous mid-1960s, depending on one’s stance on the controversies that rocked the church, Mr. Dubay was one of the most admired or despised spokesmen for reform. But I had not heard or read his name in almost 47 years. He was either working quietly on a remote island or dead.

The battle that made him famous combined the three most heated domestic issues to rock the post-Vatican II Catholic Church: religion, race and authority. Born in 1934, he entered the seminary at 13, was ordained in the Archdiocese of Los Angeles in 1960 and stationed in a segregated white parish in the San Fernando Valley. The cardinal, James Francis McIntyre, was known for the discipline administered to his priests who spoke out on controversial issues, like racial segregation, which many priests and bishops considered morally wrong. Meanwhile Father Dubay built a reputation as a writer for the Catholic press, including two articles for America, “Protestants Teach, Too” (9/6/62), a survey of Protestant books on the Bible and “Who’s Got the Hymns” (9/17/63), a proposal of a common hymnal for all Christian denominations.Father Dubay also published a Sunday newsletter calling on Catholics to support integration.

Disciplined for this and sent to a mixed-race parish, Father Dubay continued his efforts, organizing fellow priests to join his movement. In June 1964, he cabled Pope Paul VI asking him to remove Cardinal McIntyre for intimidating Catholics leaders of the civil rights movement. The  cardinal told Edward Sheehan that the diocese had built schools for Mexicans and blacks: “What is wrong, what is immoral, that they should live among their own kind—Irish with Irish, Poles with Poles, Mexicans with Mexicans, and Negroes with Negroes?”

Meanwhile the fight over integration tightened with the battle over Proposition 14, an initiative referendum outlawing all fair housing legislation as prejudicial to property rights. This would be on the ballot in November 1964; but the cardinal still insisted that segregation was a political, not a moral, question.

As Father Dubay became depressed over the reluctance of his fellow priests to stand up on this issue, he writes, “It seemed to me to be no longer a question of tactics but simple courage to do what had to be done. Any type of confrontation, I thought, would be more suitable than the present inaction.”

His book The Human Church (1966) combined his pastoral experience with a spirituality that would, through making the church structures more democratic, create a new atmosphere of human interaction that would replace the top-down rule of the hierarchy. It would include a union of priests similar to the secular labor movement. Though rejected by authorities, some suggestions, like moving seminary education to university campuses and increased Bible reading among the faithful, were ahead of their time.

One proposal that gained strong support was a call to reform the church’s interior judicial system. Father Dubay was calling upon the pope to grant him a courtroom style trial that might overturn Cardinal McIntyre’s judgments against him. An America editorial (8/27/66) “offered no sympathy for Dubay’s doctrinal or practical positions,” especially the call for priests’ unions. But the editors did support him on his right to a fair trial. “It must be candidly confessed that, by modern standards, canon law is sadly deficient in procedural safeguards for the diocesan clergy who find themselves in serious conflict with their bishops.” Over the next four years Cardinal McIntyre would move Father Dubay at least four times. He even made Father Dubay a hospital chaplain forbidden to discuss race or mingle with people he might influence.

In August 1966 when I was in my third year of theology at Woodstock College in Maryland and also writing a column on social and literary topics for America, the editors sent me to Los Angeles to cover a meeting at Loyola University. There 125 delegates for the Jesuit Educational Association received the results of a broad sociological study of all 7,307 boys in 44 Jesuit high schools by Joseph Fichter, S.J. The report, titled “And Get Back A Man,” was controversial because it revealed that a good number of seniors graduated with more negative behavior and attitudes than those entering.

Besides my report on the study (10/1/66), I also wrote a short piece under “Of Many Things” on my adventures, which included a visit with Father Dubay, who at that time was assisting the men and women at the Santa Monica Synanon House struggling to overcome drug addiction through mutual support. Father Dubay was just two years younger than I, not tall, but well built, with a look of gentleness and peace. We talked for about six hours, and I saw him as a man of courage who had suffered for his ideals. A memory of us swimming in a rough ocean surf and his refusal to be swamped and beaten down by the angry waves sticks out years later.

I recently reread The Human Church and The Priest and the Cardinal. I also checked on where he has been since we parted. In August 1968 he married Mary Ellen Wall, a divorced woman with three children. They had a child of their own. They lived in Seattle then Alaska until returning to California where he lives on an island. He writes books about language and comments on civic affairs on his website.

According to a July 14, 1969 interview with the Ogdensburg Journal in Mountain Center, Calif., a year after his marriage, Mr. Dubay began seeing a psychiatrist once a week to help him adjust to his new life. He no longer goes to Mass and is either an agnostic or an atheist. I wonder if he started seminary life too early. If he had joined a religious order that might have given him more moral support or if he had become a university professor, would he still be a priest? I pray that he is happy and will find his way back to the Eucharist again.

Raymond A. Schroth, S.J.
Show Comments (
5
)
Comments are automatically closed two weeks after an article's initial publication. See our comments policy for more.
William Rydberg
5 years 9 months ago
Jesus hasn't forgotten him or anybody for that matter. That he doesn't go to Mass is deeply troubling. Jesus help William your priest please... in Christ,
ed gleason
5 years 9 months ago
There are thousands of priests like Dubay and it's too sad so many got wounded in the hierarchy battles. The 60s hierarchs [MacIntyre et al [ won almost all the battles but the Dubays won the war.. Francis is a survivor and we ought to thank, pray for, and encourage those who were wounded in this 60s- 70s CHURCH WAR.. YOU GUYS WON.. Our mentor priest, who has passed on, made a ministry of keeping in touch with the walking wounded resigned priests.Many of the resigned were present in the rectory, singing Irish songs as he lay dying.
ron chandonia
5 years 9 months ago
I am surprised that you did not note the former priest's struggles with his sexuality, culminating in a controversial book, Gay Identity: The Self Under Ban, which rejects the concept of a fixed sexual identity.
Phil Little
5 years 8 months ago
Actually the Rev. Mr. Dubay is still a priest. An otherwise interesting article is spoiled by the condescending conclusion - "I pray that he is happy and will find his way back to the Eucharist again." Why would he not be happy? He has a family and probably a few grandchildren to tickle his golden years. Going to a psychiatrist after years of persecution and bullying by one of America's most fascist bishops is a sign of maturity, not weakness. We need to recognize that we are "pots of clay", fragile vessels and that ordination does not make us into iron and heartless robots. Good grief, he doesn't go to mass. Neither do I - my wife said "do you go just to get angry?" And of course she was right, what was served was not the banquet of love and compassion but the dribble of self-righteousness and judgment. I am willing to accept that there can be theological differences but my theology training gave me enough insight to realize that far too often what was being regurgitated was simply "wrong" and "harmful" to the faithful. No wonder that the "nones" (no religion) in North America are disproportionately coming from the RC tribe. Could Dubay be an "atheist" or "agnostic"? Maybe he is just a "recovering Catholic" who no longer is obliged to think in the old theistic paradigm. Obviously from his blog he is very much "alive" (in the sense of Irenaeus). His priesthood has evolved beyond the roman collar, which so many priest friends are ashamed to wear because of its association to scandal. Mary Ellen may well have been the one who saved him - at least that is what my wife and the wives of many retired priests would say!
Richard Booth
5 years 7 months ago
In re: Ron's comment: Actually, much scientific research supports the notion of a "movable" sexuality. In some cases, one orientation dominates, but in other cases, not so much.