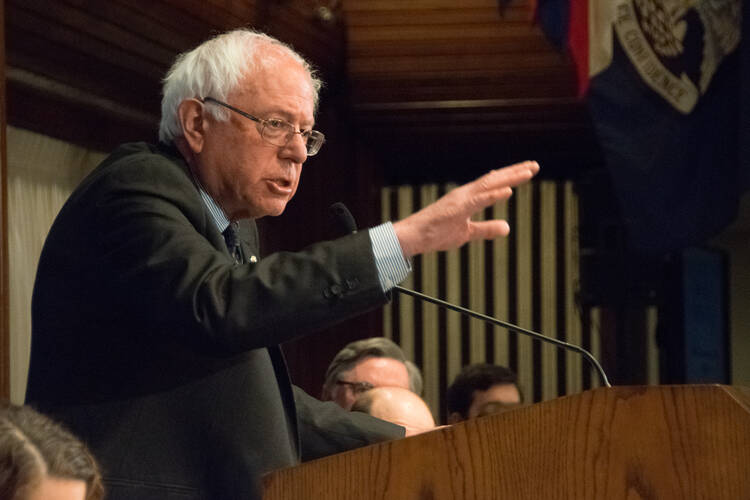 Senator Bernie Sanders is used to drawing big crowds. But the 12,000 students who packed into Liberty University's auditorium on Sept. 14 were not his typical adoring audience. The self-described Democratic socialist candidate for president had accepted an invitation from the evangelical Christian college, well known for its conservative politics, to give its fall convocation.

Sanders did not try to hide the fact he and many in the audience likely do not see eye to eye on issues like abortion and same-sex marriage. But that did not keep the Vermont senator from seeking common ground. Sanders touched on many of his usual talking points but asked the students to "put this in the context of the Bible." He quoted Amos 5:24 ("But let justice roll on like a river, righteousness like a never-failing stream.”) and the Gospel (“do to others what you would have them to do to you,” Mt 7:12) to make the case that the massive inequality of wealth and income in this country are an affront to Christian morality.

In my view, there is no justice when, in recent years, we have seen a proliferation of millionaires and billionaires, while at the same time the United States of America has the highest rate of childhood poverty of any major country on Earth. How can we? I want you to go into your hearts, how can we talk about morality, about justice, when we turn our backs on the children of our country?

He said that none of God's children should die because of inadequate health care: “The poor, the wretched, they have a right to go to a doctor when they are sick.” Sanders expressed his commitment to family values by making a case for paid family and medical leave in the only developed country that does not a mother is not “guaranteed the right to stay home and get income in order to nurture her baby.” And he said he “agreed with Pope Francis, who called the financial crisis a “profound human crisis,” and speaks often of the “idolatry of money.”

The response to his speech was polite, though  not enthusiastic. The biggest applause came not when Bernie quoted prophets and saints, but during the question and answer period, when a student asked how the senator reconciled his concern for the vulnerable with his support for abortion. Sanders took the question in stride, acknowledging they had disagreements on this topic and then steering the discussion back toward what he considers an immoral budget that hurts children and families. Some students said his call for care for the needy resonated with their Christian faith, even if they disagreed with about the role of government in helping them.

This is the type of civil discourse our country so desperately needs. Instead of denigrating those of a different faith, Sanders asked them to take that faith seriously. For their part, the students and administration of Liberty University should be commended for welcoming a voice that was sure to challenge their political beliefs. There is an unfortunate trend on campuses today to retract invitations from prominent speakers of every ideological stripe, from Bill Maher to George Will, if enough students find their views offensive. Sanders and Liberty have demonstrated that respectful dialogue is possible. The next 12 months of presidential campaigning would be much more fruitful if others sought to do the same.