Was it Celestine V or Gregory XII? 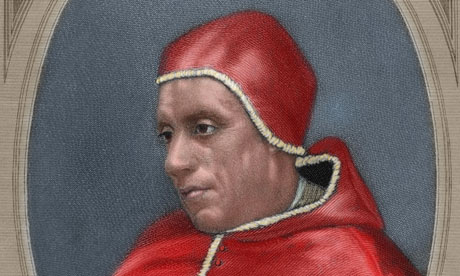 Amid all the media hype and need to find out esoteric Christian historical and canonical information on short notice yesterday following Pope Benedict XVI's announcement that he will resign from his office as Bishop of Rome on February 28, 2013, there was an understandable amount of confusion about if and when something like this had happened before. Can a pope resign? The correct answer, as most news organizations and commentators quickly discovered, is "yes, a pope can indeed resign." As I wrote here yesterday, this has always been on the books, but was something that hasn't been realized in several centuries.

The next question was: "Who was the last pope to do this?" And herein lies the trickier questions, the source of some foundering on the part of journalists and commentators the world over. Some said that Pope Gregory XII (d. 1417), who technically "resigned" in 1415, was the last pope to execute this papal option. He was, sort of. This is what makes the historical record a bit tricky.

Gregory XII resigned as part of the final action to help reunite a divided medieval church during what is known as the Avignon Papacy or the "Western Schism" (1378-1417). Without getting into all the details, suffice it to say that there were, during this period, two "popes" elected by a divided college of cardinals -- one in Avignon, France, the other in Rome (and, to make things more complicated, from 1409-1415, there was a third "pope" in Pisa, Italy). For nearly half-a-century the church in Europe had been divided by the political affiliations forged between various sovereign rulers and the respective popes of Avignon and Rome.

When Angelo Correr was elected pope in Rome on November 30, 1406, efforts were already underway to reunite the divided church. Theologian Richard McBrien explains in his book Lives of the Popes (1997) that the soon-to-be Gregory XII had made certain vows upon his elevation to the papacy. McBrien writes:

Along with the other cardinals, the new pope had sworn during the conclave that, if elected, (1) he would abdicate -- on the condition that the Avignon pope, Benedict XIII, would also abdicate; that (2) he would, in any case, not create any new cardinals, except to maintain numerical parity with the Avignon cardinals; and that (3) e would within three months enter into negotiations with his avignon rival about scheduling a meeting between the two of them.

You can see where I'm going with this. Pope Gregory XII did indeed resign, but he didn't do so of his own volition or by personal discernment. When he was elected in 1406 he, and any of the cardinals that might have been elected in his stead, had already vowed to resign if reuniting with the Avignon line of cardinals and antipope were possible. And it was.

At the Council of Constance (1414-1418) the Pisa antipope, John XXIII (yes, same name name as the legitimate pope who called the Second Vatican Council) was deposed, the two groups of the college of cardinals (Avignon and Rome) were united, the Avignon pope Benedict XIII was declared a heretic and Gregory XII resigned, as promised. The reunited college of cardinals then elected Martin V (d. 1431), who effectively marked the end of the "Western Schism."

So the question remains: "Was Gregory XII the last pope to resign?" Again, sort of. He did technically resign, but under conditions very unlike what Pope Benedict XVI has experienced. Benedict XVI has made this decision after long, prayerful discernment and under absolutely not external pressure -- he was required to profess as much in his announcement so as to mark the legitimacy of his resignation. Gregory XII had sworn, prior to being "crowned" pope, that he would resign; in other words, it was a condition of his ascendency to the papacy.

This is why one might reasonably argue that the last pope to resign of his own free will was Celestine V (d. 1296) who resigned his office after only serving as pope for a few months in 1294. He was a man who was elected to be pope as a political "compromise candidate" during a contentious period in the church leadership, marred by family rivalries and the like. Pietro del Murrone, who would become Celestine V, was known as a simple but holy man, who lived as a prayerful hermit under the Rule of St. Benedict.

The papacy was vacant for twenty-seven months when Celestine V was finally made pope, a position that he clearly did not seek nor desire. After just a few months in office (there is debate about whether it was five or four months having to do with conflicts in the official Vatican record of this short pontificate), Celestine V abdicated his office after personal discernment and of his own free will.

McBrien describes a situation not unlike that the world witnessed yesterday with Pope Benedict XVI. "On December 13, [1294], in full consistory, Celestine V read out the formula of abdication." He then took off his papal insignia and urged the cardinals to move immediately to select his successor.

While Gregory XII might technically have been the last pope to resign from office, the way in which he did so are very different from what Benedict XVI is doing now. In this way, Celestine V is really the last pope to have resigned of his own free will, after prayerful discernment, and according to his conscience.