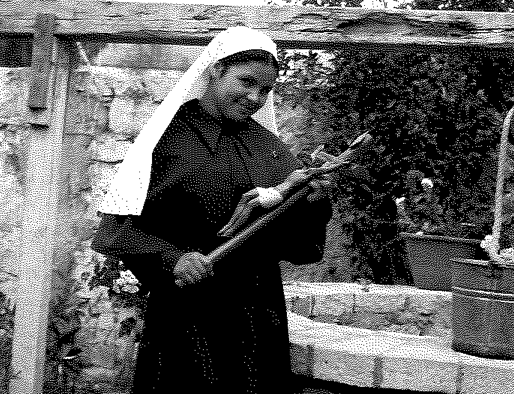 More than 30 years ago, I was tasked with preparing Pope John Paul II’s meals during his visit to Oaxaca, Mexico, where I lived in a convent. This year I will join with 100 women to walk 100 miles to greet Pope Francis when he arrives in Washington, D.C.

Reflecting now, I see that my life has been a combination of faith, migration and service, exemplified by these experiences with the two popes.

During the visit in 1979, I remember John Paul II opening my heart to a phenomenon I was little aware of. He spoke passionately about the plight of the indigenous. He described the process of people being displaced from their land in rural areas and forced to migrate into larger cities. I certainly had no idea then that I myself would migrate in a similar process years later.

This year, hearing Pope Francis’ message on the World Day of Migrants and Refugees reminded me of those words and inspired me to find a way to echo them in action and through sacrifice.

When I came to the United States, I was one of the people he describes as “leaving their homelands, with a suitcase full of fears and desires, to undertake a hopeful and dangerous trip in search of more humane living conditions.” I had left the religious life, and brought my two young children with me. Upon arrival, I did not receive the welcome Pope Francis describes as the duty of each country.

With raids happening regularly in my neighborhood in San Francisco, I was scared to leave the house. Street names and new customs were unfamiliar. I saw neighbors taken away and families who had come to escape violence sent back into those precarious situations.

Facing that adversity in Mexico had affirmed my decision to transition to lay life and come to the United States. During the decade I spent in the convent, I was taught dedication, discipline and integrity. But I realized that I had a different calling, to live out God’s mission alongside people and immersed in the daily workings of the world, not removed from it.

From Degradation to Dignity

In San Francisco, in those uncertain times of trying to set down roots, find employment, help my children adjust to their new surroundings and avoid the threat of deportation agents that always felt just around the corner, I found community with other women in the same situation.

Those who had been there longer taught me my rights in this foreign land. And we worked together to create what Pope Francis calls “a culture of acceptance and solidarity, in which no one is seen as useless, out of place or disposable.”

Imagine reading those lines some 30 years after I came to the United States. Long after I had fallen in love and married my husband, after I had earned legal status and become a citizen and now as I serve as co-director of Mujeres Unidas y Activas, a community organization that provides women with services when they face domestic violence, educates about our rights when we face mistreatment on the job and offers new opportunities through workforce development programs.

And so it will be an honor to set out on a pilgrimage on Sept. 15. Alongside 100 other women, we will walk 100 miles to echo his message in hopes that our stories may reach him during his visit. We have been inspired by Pope Francis and we hope to inspire him as well.

I will be walking with women like Silvia Gonzalez of Seattle, who has the simple wish of being able to visit her mother again, who she hasn’t seen in 15 years, in her native country. Women like Patricia Rosas, whose son was deported three years ago, leaving behind her daughter-in-law and grandchildren. And women like Pilar Molina, whose husband carried out a 17-day hunger strike inside the detention center where we will start our pilgrimage, a site of human degradation we hope to transform with human dignity.

Our world is far from what we are called to create, but we hope that each step on our pilgrimage is another step closer to it. Though global migration is a hallmark of our times, it is still marked by fearful reception, capsized boats and harrowing desert crossings. But Pope Francis places today’s migrants in the legacy of the holy family during their escape from Herod into Egypt and he tells us not to lose hope.

Far from losing hope, we are filled with it. With each step, with each mile, with each of our stories, we will arrive in the nation’s capital the night before the pope’s meeting with President Obama and we will be there eager to hear his message.

Juana Flores is the co-director of Mujeres Unidas y Activas in San Francisco. For more details on her pilgrimage, visit http://webelongtogether.org/100women and follow #100women100miles on Twitter.