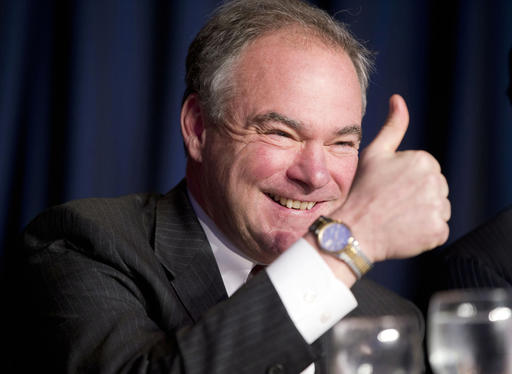 With news Friday that Hillary Clinton picked Tim Kaine as her Democratic running mate, the U.S. Senator from Virginia finds him, and his faith, back in the national spotlight. Like many other Democratic politicians who are Catholic, Kaine struggles with the challenge of living out his personal faith in a party that doesn’t always share his church’s views on complicated issues.

As a young attorney in Virginia, Tim Kaine offered his legal services free of charge to death-row inmates seeking exoneration. He has said for decades that he is against the death penalty and that he is uncomfortable with the idea of abortion. Both positions are informed by his lifelong Catholic faith, but he nonetheless eschews the label of “pro-life,” a view he made clear as recently as last week.

When Kaine ran for governor of Virginia in 2005, anti-death penalty advocates were hopeful that should he win, he might follow the lead of other Catholic governors and halt executions. The commonwealth had killed more criminals than any other state, save Texas, according to a 2012 profile of Kaine inThe Washington Post.

But political realities set in. An anti-death penalty crusader would have a hard time winning statewide office in Virginia.

So Kaine promised that, even though he was personally opposed to the death penalty, as governor, he would enforce the laws. He kept his word and 11 people, six of them black, were put to death during his tenure.

Kaine’s position, of being personally opposed to a practice but not willing to prohibit it by law, is a standard refrain among some Catholics active in Democratic politics, though more commonly it is applied to abortion rather than the death penalty.

It was in part this view that prompted some liberal activists to complain in the days leading up to his selection by Clinton that Kaine is not one of them, that he is too boring and perhaps too moderate for Democrats in 2016. (He admitted as much to the first charge on Meet the Press, stating quite succinctly, “I am boring.”)

But if he lacks a certain pizazz, what Kaine does bring to the ticket is a worldview shaped by the Catholic faith.

Born in Minnesota and raised outside Kansas City, Kaine said his church was an important part of his upbringing. He told C-SPAN earlier this year that if his family “got back from a vacation on a Sunday night at 7:30 p.m., they would know the one church in Kansas City that had an 8 p.m. Mass that we can make.”

He went on to attend the Jesuit Rockhurst High School, which is where, he said, he first started “talking about faith and spirituality.”

“That high school experience with the Jesuits was a key part of my transition into an adult life where instead of just accepting the answers of my parents or others, I’ve been a person who wants to go out and find the answers on my own, and the Jesuits get credit for that,” he said.

After being admitted to Harvard Law School, Kaine took a year off to volunteer at a Jesuit vocational school in Honduras, teaching welding and carpentry, skills he learned from his father. It was in El Progreso where he became fluent in Spanish, a skill expected to help Clinton shore up the Hispanic vote.

He told Virginia’sThe Daily Press last year that his experience in Honduras still informed his politics. “My experience working at Loyola taught me the importance of access to skills-based training—both in Honduras and the U.S.—and inspired me to pursue the issue of expanding career and technical education in the U.S. Senate,” he said.

When he and his wife settled down in Richmond about three decades later, they chose to attend a predominantly African-American Catholic parish. There, Kaine helped start a men’s group and joined a gospel choir. (He had toquit the choir once he entered politics, rehearsals becoming difficult to attend.)

He went on to become a city councilor and then mayor of the mostly African-American city in 1998. He was sworn in as lieutenant governor in 2002 and became governor in 2006. Barack Obama considered Kaine as his running mate in 2008 before choosing Joe Biden. He ran the national Democratic Party from 2009 to 2011, and he won a race for the U.S. Senate the following year.

Like his views on the death penalty, which U.S. bishops have long opposed, Kaine’s stance on immigration are also in line with the Catholic hierarchy.

In 2013, Kaine became the first lawmaker in history to deliver a speech from the Senate floorentirely in Spanish. “It is time that we pass comprehensive immigration reform,”he said in Spanish.

But Kaine’s public policy positions on abortion and marriage put him at odds with Catholic teaching.

With speculation mounting that Kaine would be Clinton’s choice, Kaine recently revisited his stance on abortion, recognizing that his own pro-life views were at odds with many Democratic activists. The party, after all, recently adopted in its draft platform for the first time a measure to repeal the Hyde Amendment, a compromise Kaine supports that for decades has restricted federal money from paying for abortions.

RELATED: Room on the Platform for Pro-Life Democrats?

Speaking toCNN earlier this month, Kaine was asked if he is “pro-life,” to which he said, “I've never embraced labels."

"I have a traditional Catholic personal position, but I am very strongly supportive that women should make these decisions and government shouldn't intrude," he continued. "I'm a strong supporter of Roe v. Wade and women being able to make these decisions. In government, we have enough things to worry about. We don't need to make people's reproductive decisions for them."

That position has worked with voters in the past, most of whom fall somewhere in between the two parties’ platforms on the abortion question. But it might not go over so well with some members of his church.

When John Kerry was nominated by the Democrats in 2004, the last Catholic to be given the nod from either party, some bishops warned that Kerry’s views on abortion meant he could not receive Communion, including Archbishop Charles Chaput, who was then the archbishop of Denver. Other bishops have said the same about Vice President Joe Biden, also a Catholic.

This year, there has been relatively little mention from the U.S. hierarchy about abortion politics, perhaps because both candidates are widely viewed to favor abortion rights. (Trump has said in recent months he is against abortion, a position that puts him at odds with his own previous statements. He did not mention the issue during his nomination acceptance speech Thursday.)

On L.G.B.T. issues, Kaine changed his stance on marriage and gay adoption in recent years, like many other Democratic leaders. In 2005, he said he was against adoption by gay parents because he believed only married couples should be allowed to adopt, and gay marriage was still illegal in Virginia.

By 2013, Kaine had changed his mind publicly on marriage, saying, “I believe all people, regardless of sexual orientation, should be guaranteed the full rights to the legal benefits and responsibilities of marriage under the Constitution.” He said he hoped the Supreme Court would legalize same-sex marriage, which it did in 2015.

He explained his thinking with theRichmond Times-Dispatch, saying he had personally changed his mind on the issue as far back as 2006. “My thinking has evolved on it because of people I know, so many gay and lesbian folks, some in long term relationships who are great parents,” he said.

When pressed by the Post in 2012 on how he makes peace with his personal beliefs and public stances, Kaine said, “I have really struggled with that as governor.” He continued, “I hope I can give a good accounting of myself on Judgment Day.”

Yet Kaine told C-SPAN he is constantly considering the bigger picture when he is voting or pushing an issue, something he traces back to his time with the Jesuits.

“Everybody has motivations in life,” he said. “I do what I do for spiritual reasons.”

There is no absolute or even objective true in any of our comments here. There are only subjective opinions and personal viewpoints. To claim anything otherwise is just self-deceiving.

It is refreshing to find someone who is honest about himself and the relevance of his comments. My suggestions are that this person stop commenting since he obviously does not expect his words to have any meaning.

Some commenters here seem to have a very low respect for the Jesuits.