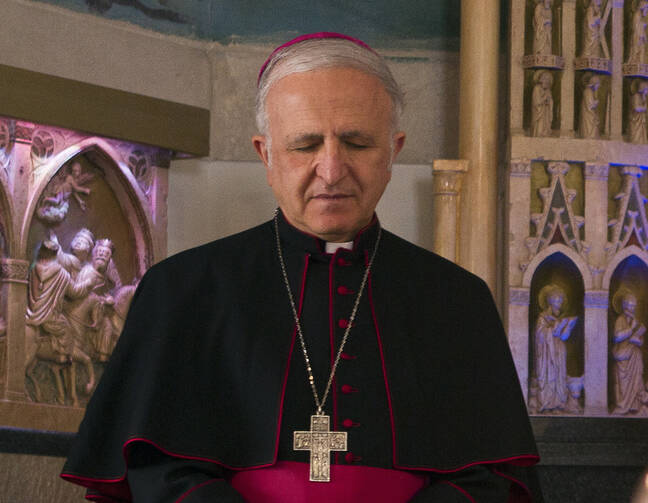 The Catholic bishops of the Holy Land want “an immediate ceasefire” in Gaza “and the restart of peace negotiations,” Bishop William Shomali, auxiliary bishop of the Latin Patriarchate in Jerusalem told me in an exclusive interview today, as the toll of deaths and destruction continued to escalate.

After 14 days of this conflict in the Gaza Strip where 1.8 million Palestinians struggle to survive—but cannot exit or enter freely due to the 7-year-old Israeli blockade—the figures speak for themselves. More than 520 Palestinians have been killed under the Israeli attack, the vast majority are civilians and roughly one-third of them are children (ages 1 to 18) and women. Over 3,500 have been injured, many seriously. Some 100,000 have sought refuge in UN run schools. Many thousands have lost their homes, destroyed by missiles or shelling, while most of the population struggle to survive because of their lack of access to drinking water, sanitation facilities and often electricity. A hospital has been hit, killing 4 and injuring 60 or more people.

On the Israeli side, 25 soldiers and two civilians have been killed, one soldier is missing, reportedly captured.

I asked Bishop Shomali, a Palestinian, to share his read on the situation.

How do you view the situation today as the conflict rages in Gaza?

I view the violent situation today as an immediate result of the failure of the peace process started by U.S. Secretary of State, John Kerry. He had nine months to write a political frame for future negotiations. The deadline came at the end of April without success. This failure caused a lot of frustration among Palestinians, tension and exasperation. The killings of the 3 Jewish young people, the detention of Palestinians which followed, the killing of the Palestinian young man in Jerusalem and the launching of rockets from Gaza were the triggering factors that caused the present violence.

There are voices of peace of course on both sides. I consider that Mahmoud Abbas is one of them. He’s against a third intifada and against escalation. He offered his condolences for the three Israeli teenagers, and he’s working for a cease-fire between Israel and Hamas, along with Mr. Sisi, the President of Egypt. On the Israeli side, there are also voices for peace: the religious leaders of Jerusalem (Jewish, Muslim, Christian and Druze) met at the Grand Rabbinate some days ago. They made an appeal for peace, in which they said that Jewish blood and Palestinian blood are equal, that life is precious because man was created in the image of God. But unfortunately such voices, as also the voices of the (political) left who demonstrated for peace in Tel Aviv and Haifa, are not heard in the midst of the shelling and killing. There are always people who seek peace and pray for peace.

Why do the hawks always win when problems arise?

What do you hope for here?

I pray for an immediate ceasefire but also to negotiate more seriously according to the international resolutions [of the United Nations] and the requirements of the two-state solution.

What is happening to the small Catholic community in Gaza? I see the Pope sent them a message of encouragement on July 17.

They are only 200 people. The Argentinean parish priest, Father Jorge, is a courageous man. He is helping people as best he can. He opened his school to the homeless whose houses were bombed in these last days. The Argentinean sisters in Gaza left, but the sisters of Mother Teresa remained and continue to take care of the handicapped children. The email of the pope to Father Jorge was to tell him that he is close to him and that he prays for him and for his community. And I believe that it is a very nice encouraging message that the pope remembers the parish priest of Gaza and the community.

What is the feeling among the Christians in the Holy Land?

The feeling among the Christians in the Holy Land is one of fear and frustration. They can’t understand that after the visit of the Pope to the Holy Land things didn’t improve but on the contrary they deteriorated. They can’t understand that. The same feeling was noted after the visit of John Paul II in the year 2000. Six months later the second bloody Intifada (uprising) started. But let us agree that it was a logical consequence of the failure at Camp David that same year.

Pope Francis phoned the presidents of Israel and Palestine on July 18. How significant was that?

It’s a nice gesture of the pope who considers them as his friends and men of peace. We expected that he would do such a gesture especially after the prayer encounter at the Vatican Gardens on June 8.

I believe in the effect of prayer even though in the immediate moment we don’t feel any result. We have to continue tirelessly to pray for peace. Prayers alone are not enough, there must also be a serious effort to reach a peace accord. We bishops of the Holy Land repeated many times that we want an immediate cease fire and the restart of peace negotiations.