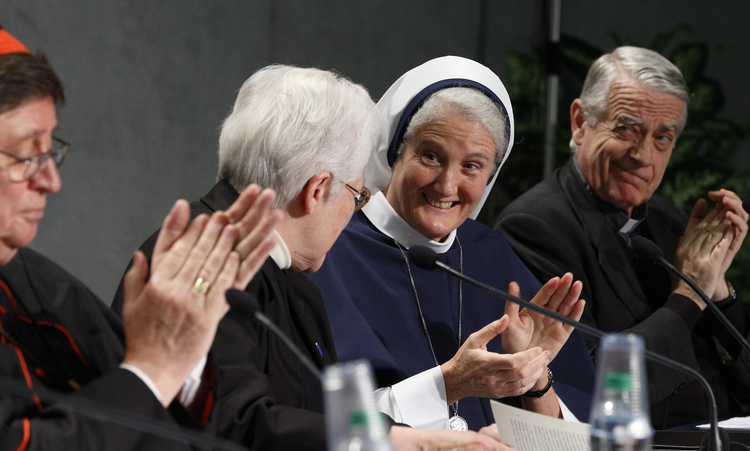 The Final Report of the Apostolic Visitation of Women Religious in the United States is positive, realistic and hopeful. The report expresses gratitude for the lives and works of women religious, those of the past and of today. The methodology of the study allowed the Apostolic Visitors to hear the concerns of sisters and so the report lists challenges for religious institutes, many of which are not new but are put in a new and coherent context regarding our way of life in the church. But the report also points to possible pathways to a more hopeful future. Three of the “calls” of the report give women religious and the whole church reason to hope: the call for dialogue with the church, the call for an increase in decision-making roles for women in the church and the call to update the Vatican document, Mutual Relations.

First, the call for dialogue. Throughout this process, sisters have been engaged in dialogue with members of other religious congregations and with the laity. Those dialogues will only multiply and deepen in the years ahead. But the report also lists a further call to bishops and clergy: “[The sisters] noted the ongoing need for honest dialogue with bishops and clergy as a means of clarifying their role in the Church and strengthening their witness and effectiveness as women faithful to the Church’s teaching and mission.”

Second, the call for roles in decision-making. The report states: “We will continue to work to see that competent women religious will be actively involved in ecclesial dialogue regarding ‘the possible role of women in decision-making in different areas of the Church’s life.’” This quote is taken from Pope Francis’ “Joy of the Gospel” and brings both joy and hope to many women and men in the church.

Finally, the call to update the 1978 document, Mutual Relations: “It will certainly be of interest to all that Pope Francis has asked our Dicastery, in close collaboration with the Congregation for Bishops, to update the curial document Mutuae Relationes regarding the collaboration among bishops and religious, in accord with the Church’s resolve to foster the ecclesial communion which we all desire.”

These pathways will hopefully result in more women engaging in the life of the church, and some discerning a vocation to the vowed religious life. In New Generations of Catholic Sisters: The Challenge of Diversity (Oxford, 2014), Sr. Patricia Wittberg. S.C., Mary L. Gautier and I analyzed data about women religious who have entered religious life since 1965. We placed those data in the wider analysis of the church in the United States. We noted that Catholic women of the millennial generation (in their 20s and early 30s) are at the greatest risk of not engaging in the life of the church. At the same time, 6 percent of these millennial Catholic women have expressed interest in exploring a vocation to religious life. This paradox demands action on the part of the whole church, providing the structural supports that are needed for that generation to grow in and live their faith.

The voice and experience of women in general, and women religious in particular, are essential to the strengthening of our church and its mission, in this country and beyond. This apostolic visitation, while so painful to so many at its genesis, has resulted in a report that can serve as a tool for prayer and action on the part of sisters and all who care about our way of life, the charisms of our institutes and our mission to our church and world.

Show Comments (
1
)
Comments are automatically closed two weeks after an article's initial publication. See our comments policy for more.
Walter Sandell
5 years 5 months ago
I believe that the status and situations of Women's Institutes is severely restrained by the refusal of the hierarchy to admit women to Holy Orders.' The 'attempt to ordain women' has been classified a 'delecta gravia,' incurring 'excommunication.' It has been classified with the sexual abuse of children, which does not incur excommunication. I consider it a 'delecta gravia' to exclude half of the Church from Sacramental Ministry. Retired priests continue to receive stipends for Masses, as well as regular retirement benefits. Masses in convents, once typical, are almost unheard of today. This has to have an impact on religious' spirituality. A priest I knew, and thought I knew well, was credibly accused of abusing pre-teen girls in conjunction with Confession. Should girls and young women have to go to a male priest for Confession? I think, NOT! The status of women in many areas is 'Second Class,' or even less. It appears that the Holy Spirit has taken over in this instance; but there's a long way to go.
Advertisement