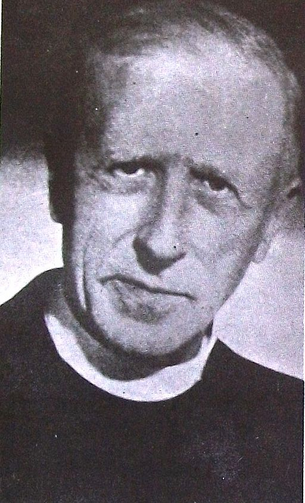 Are American nuns paying for the sins of a Jesuit priest who died in the 1950s?

It might seem that way, given the ongoing showdown between doctrinal hard-liners in the Vatican and leaders representing more than 40,000 U.S. sisters, with one of Rome’s chief complaints being the nuns’ continuing embrace of the notion of “conscious evolution.”

To many ears, “conscious evolution” probably sounds like a squishy catchphrase picked up after too much time in a New Age sweat lodge, and that’s pretty much how Cardinal Gerhard Mueller, head of the Vatican’s Congregation for the Doctrine of the Faith, views it.

The German theologian bluntly told heads of the Leadership Conference of Women Religious last month that the principles of “conscious evolution” — that mankind is transforming through the integration of science, spirituality and technology — are “opposed to Christian Revelation” and lead to “fundamental errors.”

That’s tough talk, and Mueller warned them that if the nuns persist in pursuing such dangerous ideas, Rome could cut them loose.

Yet those principles, and indeed the very term “conscious evolution,” also lead directly back to Pierre Teilhard de Chardin (1881-1955), a French Jesuit who was by turns a philosopher and theologian, geologist and paleontologist.

It was Teilhard’s thinking about humanity’s future evolution that got him in trouble with church authorities, however.

Teilhard argued, for example, that creation is still evolving and that mankind is changing with it; we are, he said, advancing in an interactive “noosphere” of human thought through an evolutionary process that leads inexorably toward an Omega Point – Jesus Christ — that is pulling all the cosmos to itself.

“Everything that rises must converge,” as Teilhard put it, a phrase so evocative that Flannery O’Connor appropriated it for her story collection. This process of “complexification” — another of his signature terms — is intensifying and Catholic theology could aid in that process if it, too, adapts.

Now, that’s a perilously brief sketch of what is an intricate and often impenetrable series of concepts, but that language is enough to show why, as early as the 1920s, Teilhard’s Jesuit superiors barred him first from publishing and then from teaching, and then effectively exiled him to China to dig for fossils (which he did with great success).

In fact, most of Teilhard’s works were not published until after his death, and in 1962 a nervous Vatican issued a formal warning about “the dangers presented by the works of Fr. Teilhard de Chardin and his followers.”

Yet if few remember who Teilhard was, his views on faith and science continued to resonate, and today, remarkably, he’s actually enjoying something of a renaissance.

Pope Emeritus Benedict XVI, for example, who as a young theologian named Joseph Ratzinger criticized Teilhard’s views, a few years ago praised Teilhard’s “great vision” of the cosmos as a “living host.” That raised a few eyebrows and prompted Benedict’s spokesman to clarify that “by now, no one would dream of saying that (Teilhard) is a heterodox author who shouldn’t be studied.”

Benedict’s successor, Pope Francis, has also invoked Teilhard-sounding concepts about the ongoing development of human consciousness, and Vatican observers say it would not be surprising if Teilhard made an appearance in an encyclical on the environment that Francis is currently writing.

Teilhard “is definitely being quoted or invoked in ways we haven’t seen in decades, and really never before by the Roman magisterium,” said the Rev. Paul Crowley, a Jesuit at Santa Clara University who has studied Teilhard.

Crowley said one reason for the reconsideration is that reality caught up with Teilhard’s ideas: The growing global ecological crisis is prompting demands for the kind of holistic scientific and moral response Teilhard would have endorsed, and the Internet is itself a digital “noosphere” of universal interconnectivity.

At the same time, scholars such as David Grummett and Sister Elizabeth Johnson have been honing and deploying Teilhard’s often arcane ideas, and the American Teilhard Association has an agenda busy with conferences and publications. It is “the emergence of Teilhard de Chardin,” as John Haught titled a 2009 essay in Commonweal magazine.

There’s even a major documentary on Teilhard in the works, with a blurb from NPR’s Cokie Roberts: “Bringing Teilhard de Chardin alive to another generation could not come at a more opportune time.”

So how is it that the American nuns are getting tripped up by Teilhard just as Teilhard is becoming cool again?

The problem is, as Crowley put it, that for every serious Teilhard scholar “there are nine New Age types who invoke Teilhard’s name” — and often botch the pronunciation.

Granted, Teilhard remains his own worst enemy. He was as much mystic as scientist, and his concepts could be so idiosyncratic and esoteric that they fed right into the ecology-and-spirituality movement that blossomed in the 1970s and beyond. Teilhard tends to be quoted by the left the way G.K. Chesterton is cited by the right — frequently and to great effect, but often torn from any meaningful context.

To be sure, Teilhard’s disciples, including author and lecturer Barbara Marx Hubbard, whose invitation to address the American nuns in 2012 continues to irk some in Rome, helped keep his legacy alive.

But at this point the Catholic Church may need to take Teilhard more seriously if it is to take him back from his fan base outside traditional religion.

Teilhard “needs substantive theological attention,” Crowley said. “What we need to do is to separate the gold from the dross and appropriate it in new ways.”

David Gibson - Religion News Service
Show Comments (
5
)
Comments are automatically closed two weeks after an article's initial publication. See our comments policy for more.
Beth Cioffoletti
7 years 2 months ago
Well, this is kind of helpful. I've been intrigued by Teilhard since I first read him some 30 or 40 years ago. I think that it was his putting "cosmos"/Creation into my notion of "Christ" that attracted me to him. Change/evolution and awareness/consciousness seemed to be inherent within the notion that Christ was bigger than just one human life (though one human life could encompass Christ). Then I read Barbara Marx Hubbard's reply to Cardinal Muller and I was so turned off. As if this is all a big intellectual leap that WE must make. As if redemption is dependent upon our efforts. Not a given, not a gift. Much as I hate to admit it, the CDF might be on the right track in watching this.
Gregory Lynch
7 years 2 months ago
Good article by David Gibson. Additional reflections are contained here. http://wp.me/3pJsV
Joshua DeCuir
7 years 2 months ago
"To many ears, “conscious evolution” probably sounds like a squishy catchphrase picked up after too much time in a New Age sweat lodge, and that’s pretty much how Cardinal Gerhard Mueller, head of the Vatican’s Congregation for the Doctrine of the Faith, views it." There is a key difference between the "Conscious Evolution" described by Barbara Marx Hubbarb in her keynote to the LCWR conference a few years ago and that of de Chardin - de Chardin at least was ernest in trying to remain faithful to the Christian kerygma; Hubbard has no interest in doing so (as she herself has said). Perhaps those "irked..in Rome" are trying to do just what the author suggests: salvage the key insights from the New Agey clap-trap.
David Pasinski
7 years 2 months ago
"Haunted" is an interesting word choice...makes sense in this context. But how about "Inspired"? Teilhard influenced my seminary college formation from 1965-9 with a study group that was faculty led as we young guys tried to make sense of the "noosphere'" and went awy still hoping that we could be part of that Church in which windows were (temporarily) opening before the shutters were slammed...
Rosemary McHugh
7 years 2 months ago
Thank you, David Gibson, for this excellent article. When I was an honors pre-med student at Loyola University Chicago, reading Teilhard de Chardin was all the rage. I found his writings to be very uplifting. I am sad that some, like Cardinal Mueller, are so closed-in in their thinking. There is need for a return to openness of thought and of expression, since none of us have all the answers. If we did have all the answers, God would not be a mystery to us. I wish Cardinal Mueller, former Pope Benedict, and other dogmatists would just chill out and be open to the creativity and wonder of our Creator and Lord in creatures, including in the nuns. I have been blessed with the wonder of God in Teilhard de Chardin's "Hymn of the Universe" and I would wish for some wonder and blessing to come into the lives of these academics and dogmatists, to help them to risk being taken over by the wonder of God, as these sisters seem to be. Sincerely, Dr Rosemary Eileen McHugh, M.D., M.Spir., Chicago