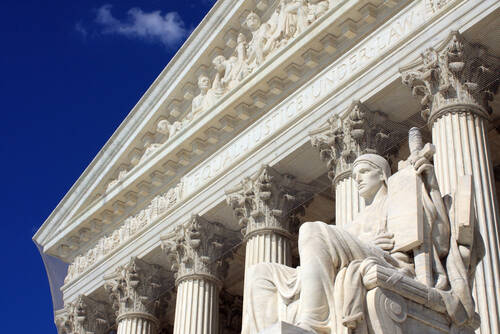 It has become something of a late-June ritual for law-beat journalists and Supreme Court watchers generally: Joining the merry band of explainers at the invaluable SCOTUSblog's "live feed" for the announcements of the justices' rulings and opinions. On Thursday, thousands checked in, eagerly awaiting news of the decisions in pending cases involving the interpretation of the Affordable Care Act and the legal recognition of same-sex marriage.

It was a busy day at the Court—the justices issued opinions in six decided cases—and, while it's safe to say that some were disappointed by the absence of an Obamacare or marriage blockbuster, two of the decisions have the potential to be landmark, even if underappreciated, freedom-of-speech rulings.
In Reed v. Town of Gilbert, the Court considered whether a town's detailed "sign code," which regulates outdoor signs differently depending on their subject matter, violates the First Amendment. The pastor of Good News Community Church had challenged the code on the ground that it selectively gave more lenient treatment to "political" and "ideological" signs than to signs, like his, containing the location and times of worship services. All nine justices agreed that Gilbert's code conflicts with the First Amendment, although they divided 6-3 on the reasoning.
In the opinion for the Court, Justice Thomas re-affirmed emphatically what has become the touchstone of modern free-speech law: Only in a few, relatively narrow instances ("true threats," for example) are officials permitted to regulate speech because of, or with reference to, what the speaker is saying. "Content-based" speech rules, in other words, are extremely difficult to justify. Even if the regulators' motives are innocent—even if their concern is road-safety rather than the suppression of dissent—the First Amendment generally requires rules that don't pick and choose on the basis of subject-matter and viewpoint.  This doctrine is, the Court admitted, strong medicine, but it serves the very important purpose of guarding against -- even overprotecting against -- government interference in or distortion of the marketplace of ideas.
The other case, Walker v. Sons of Confederate Veterans, was trickier and the justices split 5-4, with Justice Thomas joining the four more "liberal" members of the Court. This case involved Texas's specialty-license-plate program and officials' decision to reject a proposed plate featuring the Confederate battle flag. Given that Texas motorists have, at last count, at least 350 different specialty designs to choose from, the Sons of Confederate Veterans argued that the plate program is, in essence, a forum for private speech and that officials unconstitutionally discriminated against the viewpoint of their expression when they denied the battle-flag plate.
The narrow majority, in an opinion written by Justice Breyer, disagreed. In his view, the specialty-plate program—despite its diverse content and generous boundaries—is best treated as the government's own speech, rather than as an open forum. And, as he reminded us, when the governments speaks, it is permitted by the First Amendment to choose its own message. The State of Texas is allowed to endorse capitalism, fire-safety, or Longhorns football without being required to give equal time to Marxists, pyromaniacs, or Fighting Irish fans. In a powerful (and very clearly written) dissent, however, Justice Alito called into question (to put it mildly) the plausibility of the notion that anyone in the real world regards the various messages on specialty plates as the chosen message of the state of Texas. And, he warned—correctly—of the dangers posed to free speech by the expansion of the government-speech idea.  After all, in today's world, so much what "We the People" say is facilitated by public resources, or takes place on public property, or is enabled by public money. It is, we should worry, a tempting short-cut for regulators to characterize the expression of dissenters on public property as the government's own speech, which the government is free to revise or silence.
Each of these rulings involved the re-affirmation and application of longstanding, "black letter" First Amendment doctrine and each will have implications and reverberations that are not yet clear. In a way, the strong protections that were vindicated in Reed are made more vulnerable by the application of the government-speech rule in Walker. Stay tuned.
Richard W. Garnett is the Paul J. Schierl / Fort Howard Corporation Professor of Law at the University of Notre Dame.