Turned on by 'Tune In' 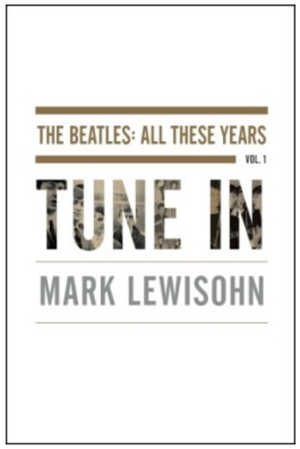 If academics ever decide to take The Beatles seriously as a subject worthy of doctoral level research and debate, Mark Lewisohn would surely be considered the godfather of their scholarly pursuits. Since the mid 1980s, Lewisohn has written or contributed to numerous books about the Fab Four, all of which have been remarkable in terms of their level of research and attention to detail. The [Complete] Beatles Recording Sessions (1988)—with its voluminous information on when and how the group recorded all of their music—is a particular favorite of mine, though it might exhaust the more casual fans.  With Tune In however—published in late 2013 as the first volume in a planned Beatles trilogy—Lewisohn has given readers an incredible first installment in what promises to be an indispensible resource about rock n roll's definitive artists.

True, the world has been treated to hundreds, if not thousands of books about John, Paul, George and Ringo but Tune In operates on a different level. Absent are the loads of celebrity gossip or sickening hagiography that mark biographies of pop stars with a fraction of the Beatles' impact. Lewisohn's great talent is to be able to situate these four Liverpudlians in a much larger social and cultural context.

Tune In goes as far back as 1845 to trace the ancestral roots of the various Beatles families. It was interesting to discover that John, Paul and George all had Irish roots, as many of their forbears headed to Liverpool to escape the potato famine. They were also the products of mixed Catholic-Protestant parentage in Liverpool--where the divide was not an insignificant issue.

Lewisohn's research has a curious effect. While some might tire of the amount of detail he includes, my experience was much different. It was as if by leaning heavily on his data he's able to strip away the endless coats of varnish that have accumulated on the Beatles' legend over the past 50 years. The result is paradoxical in that by demystifying the band and rooting them on such a human scale in a particular time and place, the reader is able to rediscover them in a way that makes the group's music and global impact somehow even more compelling.

A scene from 1956—when Lennon was 16—recounted by his boyhood friend Michael Hill is emblematic:

Hill lifted the wooden lid of his mother’s Rushworth & Dreaper radiogram, in went the record, down went the needle, and Little Richard—the irrepressibly wild Richard Penniman from Macon, Georgia— burst screaming and yowling into suburban Liverpool. Gonna tell Aunt Mary, ’bout Uncle John! He claim he has the misery but he’s havin’ a lot of fun! “This record stopped John in his tracks,” Hill recalls. “His reaction that day was something that stuck in everybody’s memory, because he really was struck dumb by this record. He didn’t know what to say, which for John was most unusual because he was always so quick with an answer, with a bit of repartee. So the record was played again, and again, and again. It made a huge impact on him. I felt good because John was so hard to impress.”

To imagine the outspoken, often caustic, Lennon as speechless at his discovery of Little Richard at age 16 is to reconnect with our own overwhelming sense of youthful wonder and freedom. Lewisohn's first installment—covering up to 1962, right before the band achieved global fame—is chock full of stories like this. In the hands of a lesser writer, they would accumulate like anecdotal lint; in Lewisohn's capable hands they weave together forming a coherent, whole cloth worthy of its subject.