Thoughts on the "Vena Amoris" 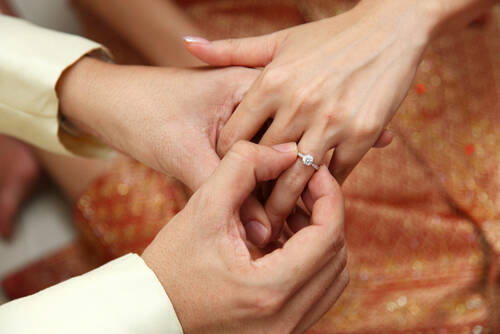 Once upon a time, I wrote a book about marriage. Its focus was the Catholic sacrament of marriage, to be exact, a topic on which I was once considered something of an expert. Funny things happen in life, however, and I am no longer sought as an expert on anything. But I believe that God is integral to any working marital union. If God is love, then there is no greater component to a marriage than the breath of the divine presence. I also believe that a marriage is both sacred and mundane, a living, organic entity with a spiritual pulse, a sum far greater than its parts.

I am thinking about marriage because my own is 33 years old this month, an adult in its own right. Every wedding anniversary, beginning with the first, is a milestone. It is a moment to be still and to appreciate the grace of a relationship that we spouses too often take for granted. In the fullness of my heart, I realize that, even after 33 anniversaries, I could only ever be an expert if I were done learning. And I don’t expect that day will ever come.

A marriage is a reflection of what two spouses believe in and create together, which makes every marriage unique. Even so, in the intimacy of most marriages are certain common qualities, values, emotions and experiences. Your spouse is the first person you see at the beginning of the day, and the last person you see before you fall asleep at night. The body next to yours brings you warmth and comfort and passion and security. The eyes of your spouse have seen you at your highest and your lowest, at your very best and your very worst. To illustrate: My husband and I had been married for just over two years when he stayed with me in the operating room through an emergency Cesarean section. The doctor had removed the baby—our daughter, who was a bluish color—and then lifted up and inspected my uterus before closing me up. I was unconscious throughout this procedure, so I only know my husband’s account of the story, which was that he was exhausted and quite certain that both his wife and his newborn daughter were going to die. We didn’t, but I am certain that he couldn’t possibly love me in the same way after he had literally seen my guts. I mean, can it get worse than that? Yet the sight of my blood and entrails somehow did not extinguish his love.

Your spouse is the person you grieve with, rejoice with, suffer with, delight with, worry with, marvel with, make love with, parent with, plan with and manage to get by with. After enough years together, you speak your own language, your own verbal shorthand. You share a history; you draw on a well of inside jokes. You know each other’s dreams; you know too how to ground each other firmly on the earth. Your spouse is your kindred spirit, your best friend, your biggest fan and your kindest critic. Your spouse is the half that makes you together exactly whole. Anyone considering marriage should settle for nothing less.

The ancient Romans believed that a vein in the third finger of the left hand ran straight to the heart, which is why we wear our wedding rings on that finger. They called it the “vena amoris.” Sometimes I feel the tug of that imaginary connection from ring to heart. I wear my embattled, 33-year-old ring with love and gratitude, along with an oil-and-vinegar mixture of pride and humility: proud to share a life with such a wonderful husband and humbled by the knowledge that we have no idea what’s around the bend or in what direction life will lead us next. We have taken difficult turns, and have had to twist ourselves into some uncomfortable positions on occasion for the good of our marriage. We have grown closer in some ways and branched apart in others, but we keep growing. As another married year begins on this anniversary of our vows, we commit ourselves anew to each other and place our marriage gently in the palm of God’s hand. We are not experts. But we are veterans of this crazy little thing, this many-splendored thing, called married love.

Valerie Schultz
@vsschultz1
Show Comments (
1
)
Comments are automatically closed two weeks after an article's initial publication. See our comments policy for more.
Bill Collier
8 years 9 months ago
A wonderful commentary. My wife and I are also 33-year "veterans of this crazy little thing, this many-splendored thing...." :)