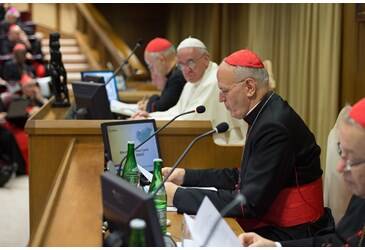 Today the Synod of Bishops issued a document that represents a stunning change in the way that the Catholic church speaks about the LBGT community. The Synod said that gay people have "gifts and talents to offer the Christian community." This is something that even a few years ago would have been unthinkable, from even the most open-minded of prelates--that is, a statement of outright praise for the contribution of gays and lesbians, with no caveat and no reflexive mention of sin.  And, regarding same-sex partners, the Synod document declared, remarkably, "Without denying the moral problems connected to homosexual unions it has to be noted that there are cases in which mutual aid to the point of sacrifice constitutes a precious support in the life of the partners."  That any church document would praise same-sex "partners" in any way (and even use the word "partners") is astonishing.

The Synod also asks questions, challenging dioceses and parishes: "Homosexuals have gifts and qualities to offer to the Christian community: are we capable of welcoming these people, guaranteeing to them a fraternal space in our communities? Often they wish to encounter a Church that offers them a welcoming home. Are our communities capable of providing that, accepting and valuing their sexual orientation, without compromising Catholic doctrine on the family and matrimony?"

This represents a revolutionary change in how the church addresses the LGBT community.  Nowhere in the document are such terms as "intrinsically disordered," "objectively disordered," or even the idea of "disinterested friendships" among gays and lesbians, which was used just recently.  The veteran Vaticanologist John Thavis rightly called the document an "earthquake."

The Synod's document also turned to several other important questions related to families, including birth control, here reminding the church of the "the need to respect the dignity of the person in the moral evaluation of the methods of birth control," that is, the need to respect the personal conscience of the individual. And the Synod's document recommended the idea of "gradualness" when it came to "cohabitation."

The document is just the mid-point summary of the bishops' meetings over the last week, and is not a final declaration. (Besides, the Synod has another session next year, after which Pope Francis will issue his final apostolic exhortation, which will be his own teaching on the Synod's deliberations.) But it is still revolutionary, as were some of the comments of the participants during the press conference today. Clearly Pope Francis's call for openness at the beginning of the Synod has allowed the bishops to listen carefully, to speak their minds and to be open to new ways of thinking.  As was the case at the Second Vatican Council, the participants may have gone into this Synod not expecting much openness or change, but the Holy Spirit is afoot.

James Martin, S.J.
@jamesmartinsj
Show Comments (
78
)
Comments are automatically closed two weeks after an article's initial publication. See our comments policy for more.
Ashley OMara
8 years 3 months ago
Does anyone have a citation for the "disinterested friendships" idea? Did a quick Google and didn't come up with anything — a pity, as I'm doing academic research on historical queer friendships and I like to keep in touch with current conversations (however they manifest).
Jonathan Harwell
8 years 3 months ago
It's in the catechism: http://www.vatican.va/archive/ccc_css/archive/catechism/p3s2c2a6.htm 2359 Homosexual persons are called to chastity. By the virtues of self-mastery that teach them inner freedom, at times by the support of disinterested friendship, by prayer and sacramental grace, they can and should gradually and resolutely approach Christian perfection.
James Martin
8 years 3 months ago

It's from the Catechism (2359) "By the virtues of self-mastery that teach them inner freedom, at times by the support of disinterested friendship, by prayer and sacramental grace, they can and should gradually and resolutelyapproach Christian perfection."