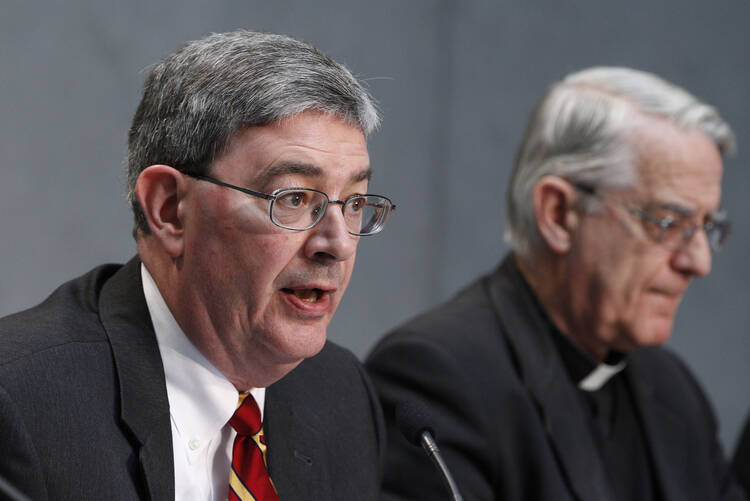 George Weigel is a Washington, D.C.-based Catholic theologian and writer, Distinguished Senior Fellow of the Ethics and Public Policy Center and Vatican analyst for NBC News. His weekly column, “The Catholic Difference,” is syndicated to 60 newspapers.

Mr. Weigel is the author of 21 books, including Witness to Hopeand The End and the Beginning, his two-volume biography of John Paul II, who was canonized by Pope Francis on April 27. He received a B.A. from St. Mary’s Seminary and University in Baltimore and an M.A. from the University of St. Michael’s College, Toronto. He has also been awarded 18 honorary doctorates in areas including divinity, philosophy, law, history and social science.

On July 16, I interviewed Mr. Weigel by email on the recent canonization of St. John Paul II. At the time of this interview, Mr. Weigel was in Cracow, Poland, where he was leading the 23rd annual session of the Tertio Millennio Seminar on the Free Society. The following text of this interview is unabridged.

You’re in Poland now until July 22. What’s the current mood among Poles about the recent canonization of Pope John Paul II?

I think there’s a great sense of satisfaction here: satisfaction that the universal church has recognized the heroic virtues of a son of this country who bent the course of history in a more humane direction. At the same time, I’d suggest that the canonization of John Paul II ought to be the moment when Polish Catholicism stops looking back over its shoulder, so to speak, and begins to look forward with the “eyes” of John Paul II. World Youth Day 2016 in Cracow, to take one example, ought to be an occasion to think about the future of John Paul II’s new evangelization, here in Poland and elsewhere, rather than about the past. That’s certainly what he would want.

Why was Pope John Paul II’s canonization such a significant moment for the church and the world?

I vividly remember that, within an hour after John Paul II died, Henry Kissinger, discussing the late pope’s legacy with Brian Williams and me on NBC, said that John Paul had been the emblematic figure of the second half of the twentieth century—the man in whose life that historical drama had been most powerfully embodied. I think that’s right, and I also think it’s astonishing: no one expected that a Catholic priest and bishop, from a country long thought to be a victim of history rather than a protagonist of history, would play that role on the world stage. And that’s an important indicator of the vitality of Catholicism. Where a lot of Catholics saw chaos and confusion in the church in October 1978, when John Paul II was elected, he saw immense possibility—and then acted on that sense of possibility.

Under Pope Francis, the media’s attention seems to have moved from Europe to the third world, implying a shift in gravity from the last two pontificates. Why should Catholics still care about Europe?

Joseph Ratzinger once wrote that the “first inculturation” of the Gospel, in the civilization of classical antiquity, had been providential, because Greek rationality gave the early church the ability to “translate” kerygma (“Jesus is Lord”) into doctrine and creed. So while the Gospel can be inculturated anywhere, because the universal truths the Gospel bears illuminate and strengthen what is good in particular cultures, there is a certain pride-of-place in that “first inculturation.” So the state of the church in Europe, Christianity’s historic heartland, remains important for the world Church. Sometimes, however, that means resisting the misconceptions the European Church (or parts of it) have about the Catholic future, which is what is happening in the third world and North Atlantic response to certain proposals for the upcoming Synod coming out of Germany. I’d also suggest that Europe has no future—literally “no future,” given its catastrophic demographics—without a profound European rediscovery of the vitality of the Gospel, which, among other things, teaches us that generosity toward the future that is essential to creating the future in the most elemental sense, by having children.

As Catholics, what can we take from the course set by St. John Paul II and Pope Benedict XVI in regard to the future of the church in Europe?

The church in Europe will survive, even if it takes the form of one of those “creative minorities” of which Benedict XVI was fond of speaking, borrowing from Arnold Toynbee. The question is whether the church in Europe will have the capacity to give Europe a new birth of freedom rightly understood. And the only church capable of doing that is a church that has rejected the temptations of "Catholic lite" and embraced the symphony of Catholic truth in full. In that sense, the church in Europe ought to look to the most vital sectors of the church in the United States for a model of the New Evangelization of John Paul II—and of public engagement with what Benedict XVI presciently called the “dictatorship of relativism.”

Other than the canonization, what are some concrete ways Pope Francis has honored or continued the legacy of St. John Paul II?

"Evangelii Gaudium" is Pope Francis’s “playbook” for implementing John Paul II’s New Evangelization, as I tried to explain in the afterword to the recently-published paperback edition of my Evangelical Catholicism: Deep Reform in the Twenty-First Century Church. There’s a deep, strategic continuity here: at the end of the Great Jubilee, John Paul II challenged the world church to leave the shallow waters of institutional maintenance and “put out into the deep” of a New Evangelization. That is the core of Pope Francis’s message and, I think, the heart of his papal ministry.

Are you working on any upcoming projects in regard to St. John Paul II?

At the moment I’m working with my photographer-son, Stephen, and my old Ethics and Public Policy Center colleague, Carrie Gress Stibora, on a historical-spiritual guidebook to Cracow, presenting this remarkable city through the prism of John Paul II’s life here. I hope the book will be helpful for World Youth Day 2016 pilgrims, and long beyond that. And I continue to ponder the possibility of a memoir of my experiences with John Paul II.

In your opinion, what are the greatest signs of hope in the Catholic Church right now?

The young people I’m privileged to work with here in Cracow—from the U.S., Poland, Lithuania, Slovakia, Russia, Ukraine and Colombia—are a terrific sign of hope for the Catholic future, not least because they’re unaffected by the post-conciliar tong wars between Catholic “progressives” and Catholic “traditionalists.” They’ve met the truth in Jesus Christ, and they want to deepen their knowledge of that truth in all its dimensions, so that they can be the missionary disciples John Paul II and Francis are calling them to be; they’re simply uninterested in the who’s-in-charge-here fights that exhausted too much of post-conciliar Catholicism.

Then there are the tens—indeed hundreds—of thousands of people who were baptized as adults or came into full communion with the Catholic Church at Easter. That’s the index of the church’s health: how many new brethren are accepting our invitation into the Body of Christ. I’m also encouraged by the U.S. bishops’ firm stance in defense of religious freedom for all, which is a service to the United States and the world, not just to the Catholic Church.

What are the biggest challenges facing the Catholic Church right now?

I lay out a lot of this in the second part of Evangelical Catholicism, addressing what seem to me the reforms needed in the episcopate, the priesthood, consecrated life, the lay vocation, Catholic higher education, the liturgy, the church’s public witness, and the papacy and the Roman Curia, so that the church of the 21st century can be the church of the New Evangelization that it must be. Let me highlight just one of those proposals here.

We need a refined set of criteria for the selection of bishops, focused on a man’s proven capacity to be an evangelizer, and we need a refined mechanism for dealing justly, but with appropriate speed, when a bishop has manifestly lost the capacity to govern his diocese—which usually means a loss of his capacity to be an evangelist. The seeming inability of the church to deal with episcopal malfeasance or incompetence (or worse) is a large drag on the New Evangelization. That doesn’t mean subjecting bishops to impeachment-by-media-driven-plebiscite; it does mean recognizing when, by the church’s own standards, a change is essential for the future of the church’s evangelical mission, and acting on that recognition.

As the legacy of St. John Paul II continues to evolve, what are your hopes for the pontificate of Francis?

Pope Francis was elected to clean up what Ronald Knox used to refer to as the “engine room,” meaning the church’s central administration. He has made a courageous start on that with the appointment of Cardinal George Pell as Prefect of a new Secretariat for the Economy and by the clean-up at the Institute for the Works of Religion, the “Vatican Bank.” The reform of the Curia will, I hope, continue, and be guided by what I called, in Evangelical Catholicism, the “criterion of mission”: does this or that proposed reform enhance the church’s mission-effectiveness? That would make clear that curial reform and restructuring is not just moving slots around on an organizational flow-chart, but a matter of trying to bring the church’s central administration into line with the New Evangelization, which it, like everything else in the church, must serve.

Orioles Magic is back, I hope!