Speaking of the Saints... 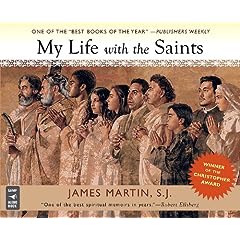 In October of last year, I made a pilgrimage of sorts to Cincinnati, Ohio, a city that boasts great chili, serves great (Graeter’s, to be specific) ice cream, and, most importantly, is home to very warm people.  Several years ago, I had spent a marvelous summer in nearby Milford, Ohio, at the Jesuit Retreat House learning how to direct the Spiritual Exercises, and I had grown to love the city.  This time my host was St. Anthony Messenger Press, the Franciscan Order's publishing apostolate, and I was there to record the audio version of my book My Life with the Saints.

When St. Anthony first contracted for an audio book of the same title (they retained the audio rights from Loyola Press) I thought, “Well, how hard could recording it be?”  After all, I had done radio recordings before and enjoyed it.  What’s more, how long could it take?  Matt Wielgos, from St. Anthony Messenger Press, laughed when I asked him that question.  Based on his work with many other books and many other authors, he had an answer ready.  “Three days,” he said.  Three days?  “That’s impossible!”  I said.  But his “impossible” calculation proved exactly right.  Three days, from 9 a.m., to 6 p.m. in an airless little soundproof studio.

Despite the long hours, it was great fun.  For one thing, it was wonderful meeting the welcoming, talented and highly professional St. Anthony Messenger Press (or SAMP) team.  Sponsored by the Franciscan Order, St. Anthony Messenger Press is located in an immense complex in Cincinnati that includes the publishing house, the amazingly high-tech audio book division, St. Anthony Messenger magazine, Catholic Update, as well as, in the same complex, a gorgeous Franciscan parish (in whose chapel I was happy to celebrate Mass on Sunday morning) and the offices of the St. John the Baptist Province of the Franciscan Order.  Spending time with Franciscans and their colleagues is always good for a Jesuit.  And I mean that.  All that plus some great burgers and dinner at a local hangout where "Rain Man" was filmed.

Happily, the actual recording wasn’t physically difficult (plenty of throat lozenges and plenty of breaks helped with that end), though it was surprising even to me how many saints I had written about!  A few weeks later, another friend who was recording his book with St. Anthony's called and said, “Boy, next time I’m writing a shorter book!”  The technical expertise of the group amazed me as well.  At one point I felt (rather than heard) my stomach growl, as we approached lunch.  The voice on the other end of the earphones said, "Um, Father Jim, did we hear a...noise?"  So I can assure you the sound quality is superb!

The St. Anthony team said that they were happy that the author had recorded the book (rather than a professional voice-over person with perhaps a more mellifluous voice) since there were a few words and phrases in Latin, Italian, Spanish, French and Swahili (I am by no means fluent in any of those, but the book includes a few foreign phrases), as well as the odd Ignatian turn of phrase that a voice-over artist might puzzle over (like the standard pronunciation of examen).  But I didn’t know how to pronounce everything.  The team had to clue me in on the most accurate pronunciation of Agnes Gonxha Bojaxhiu, aka Mother Teresa.  And a few times my Philadelphia accent made it hard for the Midwesterners to understand a word or two.  “What was that?”   But after the three days, I was delighted to have completed the task.

In any event, today is the official “pub date” of the audio book.  It’s available on St. Anthony’s page here, and on Amazon.  In a few weeks, it will also be available in a few weeks on audible.com, for downloading for your Ipod.  So if you’d like to hear Philadelphian talk about his life with the saints, well, I spent three days making sure that you would be able to!

James Martin, S.J.
@jamesmartinsj
Show Comments (
5
)
Comments are automatically closed two weeks after an article's initial publication. See our comments policy for more.
James Lindsay
13 years ago
Congratulations!
13 years ago
Now that my vision is worse I mostly listen to books rather than read them, so it's interesting to hear how audio book CDs are made made.  I've read your book but look forward to listening to it as well.
Bill Barker
13 years ago
Fr. Martin...looking forward to "hearing" your book soon. Love the print edition and have recommended it to many to their great satisfaction.
My parish has ordered copies for all of our RCIA participants for the past few years and all who have received them have been blessed for it.
I enjoy your blog each day and enjoy starting each day with the Jesuits.
God Bless...Bill
Peter Lakeonovich
13 years ago
Great work padre!
Therese Duross
13 years ago
Dear Father, We are a group of 14 women who are using your book on the Saints at our book club.  We are very happy with it...both your journey and the journeys of the various saints!  I am from Philadelphia and attended Ravenhill Academy.  Did you have a relative named Isabel Martin?  I knew her in the late '40"s.  Sincerely, Sr. Therese