80 years after the birth of Social Security, remembering Miss Ida May 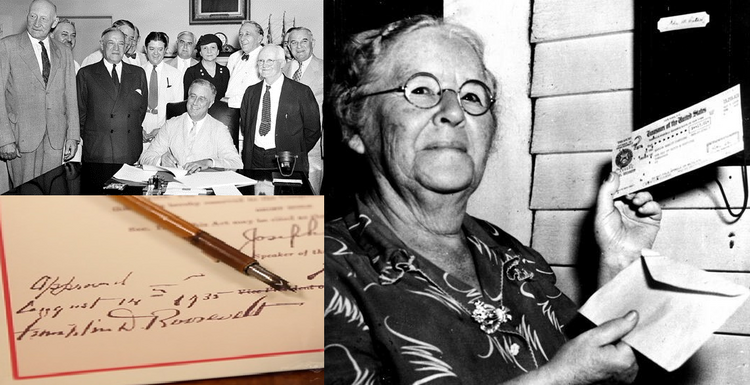 On a winter’s day in early 1940, a 65-year-old woman opened the front door of her house in Ludlow, Vermont, and went to her mailbox. Her mailbox was just outside the door, and she reached up to open the lid to retrieve the delivered mail. She’d done it many times, but this was no ordinary trip. The minute she opened that mailbox and picked up its contents, she automatically became a part of American history and lore (though she would not have realized it at the time). When the retired school teacher and legal secretary opened the envelope, she became the recipient of a check issued to her by the United States Government. Numbered “00-000-01,” it was the very first Social Security check. It wasn’t a big check—certainly not by modern-day standards—but it was made out to the amount of $22.54, and it was welcome.

That woman’s name was Ida May Fuller. She had only been retired three years by the time she went to that mailbox, and the check she held in her hand was the result of an act approved by the Congress of the United States and it was an act that was signed into law on this date—August 14th—by President Franklin D. Roosevelt, in 1935. As members of the press and photographers recorded this monumental event of the New Deal, the president took note of the significance of this moment to applaud the Congress for approving this legislation, and to remark that what they did was a “patriotic act.”

At the time, President Roosevelt could not help wondering about what would be the lot of young people “when they came to old age.” And being that this was in the time of the Great Depression (and before the socio-political upheavals that were to come with the Second World War and afterwards), FDR was also concerned about the unemployed and those having no job security. The Social Security Act was not a “cure-all” or an “end-all,” but it was designed to provide assistance to those who did not have the wherewithal to face life’s uncertainties, which, in those Depression times, were obvious and very real. As the president said: “…we can never insure one hundred percent of the population against one hundred percent of the hazards and vicissitudes of life…” The act has grown to function primarily as a safety net for retirees and the disabled; it also provides death benefits for taxpayer dependents. And it has helped untold numbers since its enactment into law since 1935, as it had the woman who went to her mailbox.

But what about the woman who became the first recipient of a Social Security check? Miss Ida May Fuller—known to family and friends as “Aunt Ida”—was, in the parlance of the day, a “spinster”; she had never married and had no children. She lived alone until the last eight years of her life, when she lived with a niece, Hazel Perkins, and her family in the town of Brattleboro, Vermont. Miss Ida was born on September 6, 1874 and attended school in Rutland. Until that moment when she opened her mailbox, her only claim to fame was that she had been a classmate of that notoriously taciturn Vermonter who somehow made it in life to become the 30th President of the United States, the red-haired and dour Calvin Coolidge (who happened to have been born two years previously—on the Fourth of July). When Ms. Fuller gained employment as a secretary in the local legal firm, it had as one of its partners a Mr. John G. Sargent, who would become the Attorney General in the administration of the same Calvin Coolidge she went to school with.

By the time she received her Social Security check, Miss Ida had worked some 32 years—she started out in 1905 as a school teacher and as mentioned, she ended up as a legal secretary. When the time came for her retirement, she made some inquiries about how to go about it; so, while doing errands, she simply went to the Rutland Social Security Office and put in an application. As Miss Ida put it: “It wasn’t that I expected anything, mind you, but I knew I’d been paying for something called Social Security and I wanted to ask the people in Rutland about it.” So, Elizabeth Corcoran Burke, Claims Clerk, processed the papers and forwarded them to the Claims Division in Washington, D.C. Her case was adjudicated and reviewed. It was cleared and it was then sent to the Treasury Department in January 1940. There were batches of claims by prospective recipients to go through; out of those batches of 1,000, Miss Fuller’s was the first one on the Certification List. So when she went to her mailbox on that winter’s day, and found a check addressed to her, dated January 31, 1940, and she became a part of American history.

Ida May Fuller had paid three years—and $24.75—“into the system,” (as it would come to be known) before she retired. She was 100 years old when she died on January 27, 1975—almost 35 years to the day when she reached up to her mailbox. She ended up collecting $22,888.92 in benefits in those intervening years (those Vermonters are a sturdy lot—and like Vermont’s “famous son,” Mr. Coolidge, they are quite careful economically, too!). By opening up that envelope on that long-ago day, she ushered in an era and a belief—little thought of now, and often derided and denigrated—that government had a role in enhancing people’s lives and that if done right, government—as Mr. Lincoln once said—can be “of the people, by the people, and for the people.”

There are many people today who—for one reason or another—dislike, even hate the idea of government having a role in people’s lives and that it diminishes rather than enhances the quality of life. And given the climate of our political system in recent years, it has often become a widely-held view, and it is a view that is not without some reason. But as with many things, it can be a worldview which skewers the basic and original premise of an idea or aspiration—and in this case, governmental assistance. It is not a new idea and there are as many people who are for it as there are those who are against it.  But at its heart, it is a Gospel idea, the belief that we should care for one another.

As a matter of fact, the Catholic Church in the United States has supported such a view, even before it became an article of faith by the government: back on February 12, 1919, the Administrative Committee of the National Catholic War Council appealed to the country to legally establish a minimum family wage—and a living wage.

As an editorial in America dated August 27, 1955 pointed out (commemorating the then 20th anniversary of the Social Security Act), “In looking back over the past 20 years, it is encouraging to note that widespread fears over the nation’s experiment in social security have not been realized…Time has shown that these systems, though vastly expanded now, have been neither too difficult not too expensive to administer. As for weakening individual incentive…old-age pensions, by providing only basic, minimum coverage, have on the contrary stimulated personal saving and all kinds of privately financed group insurance and retirement plans…”

It must be pointed out that at the time, America’s editors—as well as political, governmental and business officials, all realized that “…for all its solid achievements…” the Social Security Act “…still requires perfecting amendments.” The Social Security Act—and every program that is designed to provide assistance of some sort—has not been free from controversy or malfeasance. That is true of any human endeavor and such things are always in need of attention and correction. And despite the controversies and disagreements that have attended it ever since FDR signed it into law in 1935, it does not diminish the essential fact for what it was designed: to assist those in need.

Eighty years have come and gone, and the Social Security Act, while derided by some—and cherished by many—is still here, helping the Ida May Fullers of our time. And it would not be a bad thing if people in this presidential election year—voters and candidates alike—stop amidst the political din and clamor and take time to pause and think about this anniversary, and more importantly, reflect on what government really is supposed to do, instead of mindlessly and reflexively opposing those things that might be good, only because—in their worldview—it could be bad.  Even Miss Ida the schoolteacher could teach a lesson on that.

Surely she had other funds set aside to live on in her retirement years! As low as the cost of living was in 1940 $22 wouldn't pay for much. And by the time she died in 1975 she would have needed many times that amount.