Simone Weil's Guide to the Election 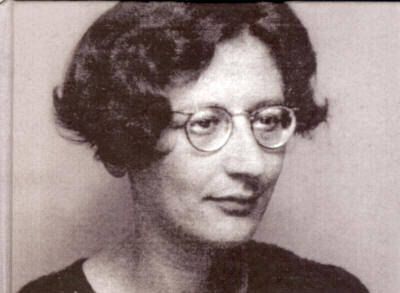 It’s hard to think of something less inspiring than going to the polls today. As with the one before it, and the one before that, and so on, this will be the most expensive (read: wasteful, corrupted) midterm election in U.S. history. To gird myself to vote, in the midst of a certain governor’s vengeful concoction of a political party, I picked up the recent reissue of Simone Weil’s 1943 essay “On the Abolition of All Political Parties.”

A French Jew teetering on the edge of conversion to Catholicism, a philosopher just months away from her death by starvation in solidarity with those living under Nazi occupation, Weil wrote at a time when political parties were at their worst. For all the failings of the Democrats and Republicans nowadays, they’re not as manifestly horrible as what was before her. Weil’s basic case against parties, however, applies to our time as well. It rests on how parties inhibit the moral spirit and rational sense of their participants. Like corporations legally structured to maximize profits, political parties seek above all their own growth, and that urge can come before the common good. Individuals who find it necessary to join a party, who see it as a means of making change for the better, will always have to trade the particularity of their own views for conformity to the party platform.

“When a country has political parties, sooner or later it becomes impossible to intervene effectively in public affairs without joining a party and playing the game,” Weil wrote. The game, as we well know, means lying. “If belonging to a party compels one to lie all the time, in every instance, then the very existence of political parties is absolutely and unconditionally an evil.”

Thus, her absolutist demand: “the abolition of all political parties.”

(Hauntingly, Weil finds a connection between the totalitarianizing impulse of political parties and the doctrinal platform of the modern Catholic Church. Each demands assent to a range of opinions so broad and specific as to threaten individual reflection and investigation. “That the Church established by Christ could thus, to such a large extent, stifle the spirit of truth,” she mourns, “is a tragic irony.”)

If parties were out of the way, Weil envisions a revival of political spirit beyond the token participation of an election day. She looks back to the Cahiers commissioned by Louis XVI just before the outbreak of the French Revolution, when people from all corners of society gathered and pooled their greivances. “The country was then overflowing with life,” she believed—and, indeed, that process of gathering and reflecting on their problems together whetted people’s appetite for democracy. She briefly outlines a political culture in which parties are abolished and forever banned, in which people might coalesce to develop common theories and philosophies but renounce their partisanship when the time comes to make decisions. And considering how badly the party system has been working for the United States lately, perhaps her absolutist demand is not so unreasonable.

Regardless, I think the point for us is this: May we not let our politics begin and end with the “frightful despotism” of factions, with campaign contributions, with election day. True and honest politics is what happens in the spaces between the parties, in the convictions that no platform or Super PAC can speak for.