Should U.S. bishops weigh in on the carbon emissions policy? 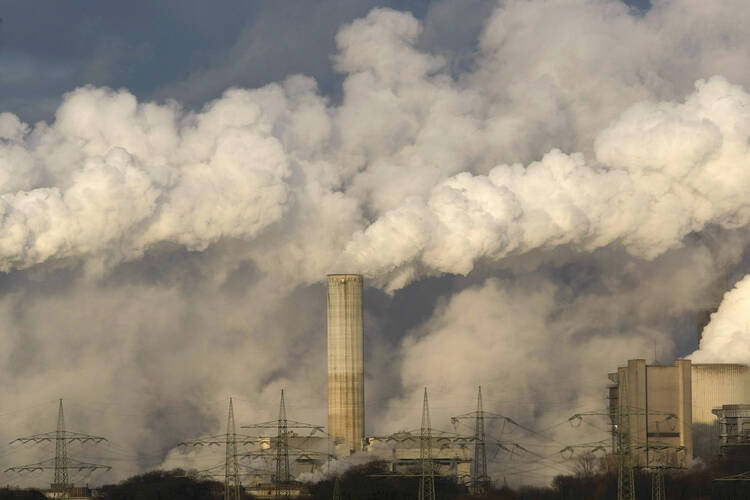 On Thursday May 29, the U.S. Conference of Catholic Bishops (U.S.C.C.B.) published a letter to Environmental Protection Agency (E.P.A.) Administrator Gina McCarthy about the agency’s carbon emission standards for existing power plants. The letter highlights several principles of Catholic Social Teaching (CST) with which to assess the proposed standards. These include: respect for human life and dignity; prudence on behalf of the common good; priority for the poor and culnerable; social and economic justice; and care for creation.

For Catholics who regularly engage with the church’s authentic teaching on climate change, the bishops’ articulation of these principles vis-à-vis environmental justice and climate change is not surprising. Since the publication of Saint John Paul II’s 1990 World Day of Peace Message, which effectively began the church’s modern creation care ministry, these principles have been repeatedly affirmed in light of environmental degradation and climate change. Thus the content of the letter itself is unlikely to raise many eyebrows.

What is likely to be more controversial, however, is the U.S.C.C.B. issuing this letter in the first place. Some people of faith and goodwill are likely to tacitly question—or outright challenge—the bishops' involvement in climate change mitigation policy. I suspect that many such challenges are likely to be inspired by ideological differences with the church’s authentic teaching on climate change rather than genuine concern for the proper role of the U.S.C.C.B. Nevertheless, it is important to affirm the letter’s appropriateness. Once the concerns about the letter’s aptness have been addressed, U.S. Catholics will then be able to focus on more substantive, fruitful engagement with the text.

A Voice in the Public Square

The church recognizes that political institutions are necessary to protect and promote the common good that constitutes “a truly human life” (Gaudium et spes, art. 74). In addition, the church maintains that it has the ability and responsibility to make unique contributions to public discourse by virtue of its distinct understanding of human nature (Cf. Compendium of the Social Doctrine of the Church, no. 61). Given this, and in view of the church’s insight that episcopal conferences are a valuable institutional arrangement to this end, the church recognizes that bishops' conferences can—and must—engage in political advocacy rooted in its social teaching (Apostolos suos, no. 15).

The U.S.C.C.B. letter to the E.P.A. regarding its carbon emission standards is first of all an effort to fulfill the conference’s vocation to directly shape public discourse. In the letter, the bishops first recognize climate change as a moral issue (an insight repeatedly affirmed by Saint John Paul II, Pope Emeritus Benedict XVI and Pope Francis as then-Cardinal Jorge Bergoglio). Guided by the principle of subsidiarity (through which they are aware of previously failed climate change mitigation approaches), the bishops next implicitly approve the E.P.A.’s policy approach. Finally, the bishops seek to help shape the policy proposal through the articulation of ethical criteria that are inspired and animated by the wisdom of Catholic Social Teaching.

The U.S.C.C.B.’s letter to the E.P.A. also satisfies the bishops’ responsibility to help shape the consciences of U.S. Catholics. The church insists that all Catholics have a moral obligation to participate in the political life through action and advocacy that is guided by their faith (Catechism of the Catholic Church, nos. 1913-1915). Towards this end, the U.S.C.C.B. exercises its pastoral vocation by helping Catholics form their consciences according to “a moral framework for principled Catholic engagement in public life” (Forming Consciences for Faithful Citizenship, no. 40).

The bishops’ responsibility to help Catholics form their consciences entails, among other things, the articulation of prudential assessments about pressing political issues. As such, the ethical framework articulated in the U.S.C.C.B.’s guidelines can help Catholics to form and exercise their consciences. This is particularly important in light of the fact that citizens will have an opportunity to comment on the proposed standards, which were released today, June 2.

Global climate change threatens to compromise the Catholic commitments to protect human life and dignity, exercise a preferential option for the poor and care for God’s good gift of creation. Pope Emeritus Benedict XVI asserted in his encyclical Caritas in veritate that “the Church has a responsibility towards creation and she must assert this responsibility in the public sphere” (no. 51, emphasis in original). The U.S.C.C.B.’s letter to the E.P.A. fulfills the conference’s vocation to both influence public policy and form individual consciences in accord with authentic Catholic teaching. Although it remains to be seen whether policymakers and individual Catholics heed the bishop’s insights, the U.S.C.C.B.’s letter serves as a prophetic call to all people of faith and goodwill.

Daniel R. DiLeo
Show Comments (
1
)
Comments are automatically closed two weeks after an article's initial publication. See our comments policy for more.
J Cabaniss
7 years 6 months ago
I have rarely encountered an article with which I disagreed more than this one. From the explanation of the USCCB's right (duty?) to involve itself in political issues to the assertion that the church has an authoritative teaching on climate change, I disagree with it all. Regarding climate change, the extent of the "authoritative teaching" amounts to nothing more than a call: "to exercise responsible stewardship of creation". (BXVI) The assertion that "Global climate change threatens to compromise the Catholic commitments to protect human life and dignity..." is based on the assumptions that abnormal climate change is occurring, the change is harmful, man is responsible for it, and man can mitigate it. Is the USCCB capable of resolving these scientific questions? Is it reviewing the scientific literature to tell us which climate models our faith compels us to believe? If the science is unresolved how can anyone believe we have a moral obligation to take specific actions to mitigate problems we (a) don't know exist and (b) don't know how to mitigate?Apostolus Suos justifies the existence of Episcopal Conferences by citing the need for bishops to work "harmoniously and closely every day with other Bishops." Let's at least acknowledge that the letter from the USCCB to the EPA represents not the collegial consensus of the US bishops but the opinions of the bishop (singular) who wrote it. Nor do I not accept that the exhortation to "ensure their protection in civil legislation" justifies the transformation of an Episcopal Conference into a bishops political action committee.