Should Christians fast this Ramadan? 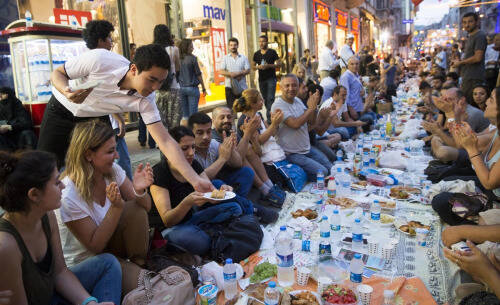 The murderous event that occurred in Orlando early Sunday morning has of course captured the attention of us all, and it has been interpreted, rightly I think, from many angles. Omar Mateen was a disturbed young man, struggling with his own sexuality and disastrously lashing out; he was a terrorist dedicating himself to ISIS and its war on America; the event, as terrible as it was, is but a moment in the much larger scandal of our government—the Senate, the House, and we who elect them—and its abysmal failure to put even reasonable controls on guns; it was a hate crime once more victimizing the L.G.B.T. community, within the Latino/Latina community, a crime made worse by the leaders who cannot bear to mention the targeting of lesbian and gay, bisexual, transgender and queer people, when they lament the crime in general terms. All of this raises questions about how we are to act, when our brothers and sisters have been killed and wounded, when Congress fails to fulfill its duties, when the violence rampant in our society seems to get ever worse; what ought you and I do? And does prayer do any good, prayer with or without urgent action?

What did come to mind during the week, as we think about the still larger picture, is that this is the month of Ramadan (June 5-July 5), this holy and rigorous month, where nothing can be taken by mouth—even water—between sunrise and sunset. The observance of the Ramadan fast has over the centuries become one of the five pillars of Islam, and right now approximately a billion people worldwide are observing this fast, so very hard in the heat of summer and its very long days. The supports for this practice are deep-rooted in tradition, in custom, in traditional sayings (hadith) and in the Qur’an itself. My Study Qur’an highlights this passage:

Fasting, with exceptions for those who are ill or on journeys; having less, and sharing it with the indigent; giving thanks to God the Protector, who protects us and does not test us beyond what we can do; marking the coming down of the Quran to earth, the criterion for separating the true from the false (2.53).

There are many hadith on this practice, including this beautiful one:

The Messenger of Allah (saw) addressed his companions on the last day of Sha’ban, saying, "Oh people! A great month has come over you; a blessed month; a month in which is a night better than a thousand months; month in which Allah has made it compulsory upon you to fast by day, and voluntary to pray by night. Whoever draws nearer (to Allah) by performing any of the (optional) good deeds in (this month) shall receive the same reward as performing an obligatory deed at any other time, and whoever discharges an obligatory deed in (this month) shall receive the reward of performing seventy obligations at any other time. It is the month of patience, and the reward of patience is Heaven. It is the month of charity, and a month in which a believer's sustenance is increased. Whoever gives food to a fasting person to break his fast, shall have his sins forgiven, and he will be saved from the Fire of Hell, and he shall have the same reward as the fasting person, without his reward being diminished at all." [Narrated by Ibn Khuzaymah]

Multiplied a billion times over, this faith and this fast become a very powerful force indeed, greater than the violence, the hatred, the wall-building and immigration-banning that capture the headlines. Surely many readers have noticed yogis who every once in a while call for world-wide days of meditation and mind-focusing for peace; Ramadan is a much older, much more deeply rooted global practice for the better.

Really for the better? The New York Times (June 18) has a front page story on the ambivalence and distress of young Muslims in this particular Ramadan season, amidst the election politics and after Orlando. Worse, it has been reported that Mateen chose to carry out his murderous attack in Ramadan because it was Ramadan, to do his duty as a believer. Some politicians, in Europe at least, have claimed that Ramadan is a dangerous time because it drives Muslims to excessive fervor and some to erupt in violence. I cannot deny the possibility of sad exceptions, but such complaints surely miss the point, what Ramadan means for nearly all the Muslims on earth. It is a time of prayer and fasting, purification, charity, self-humbling before God, who alone metes out justice.

In 2001, when I was still teaching at Boston College, Ramadan fell in the month of December. To mark the three months commemoration of the 9/11 attacks, at Boston College we promoted a day of shared fasting, students, staff and faculty of all faiths. At sunset (early, in December), we shared a simple meal. It was a very good thing to do. One thing we can do—the billion-plus Christians in the world, with people of all faiths and spiritualities—is join with our Muslims neighbors and friends in some fasting, and, when possible, in the sharing of the post-sunset meal (iftar) that breaks the fast.

Now I admit that it would be hard, very hard, for most of us, to undertake a fast as radical as that of Muslims: nothing to eat or drink between sunrise and sunset. Even for experienced Muslims, it takes days to adjust to the new rhythm. I could not right now undertake a serious Ramadan fast on my own, not if I want to keep doing all the things I need to do each day. (For Jesuits, food is fuel, no working on an empty tank.) But something is better than nothing, and if—let’s say, we Catholics—can undertake some acts of fasting of the modest, small Catholic kind (skip a snack, skip a meal, don't take that drink) during the rest of Ramadan, either by ourselves or right with our Muslims sisters and brothers, then we will be pushing back, spiritually and in solidarity, against the violence, against the irresponsible production and sale of weapons of mass murder, against the splintering of communities, against fanatics who think they own faith and own devotion, against the would-be wall-builders who only claim to be brave, against the cowardice of our elected representatives and our own stupidity in electing the wrong people again and again.

Check around; I am sure some people you know are thinking of fasting in a time like this, even if they are not Muslims.

But will small tokens of solidarity between now and July 5, make a difference? Throughout history, as Mahatma Gandhi showed us so clearly—and also Dorothy Day and Cesar Chavez and Buddhist monks during the Vietnam war—fasting can become a powerful tool, resistance to evil great and small and a force for unity and community. Or as Jesus says: Some demons can be driven out only by prayer and fasting (Mark 9:29).

Francis X. Clooney, S.J.
Show Comments (
3
)
Comments are automatically closed two weeks after an article's initial publication. See our comments policy for more.
PJ Johnston
6 years ago
I don't know if you saw either of these articles from UCAN, but the Church in India has taken an approving interest in Ramadan for some of the reasons you noted: http://www.ucanindia.in/news/hindu-muslim-prisoners-observe-ramadan-fast-together/32392/daily http://www.ucanindia.in/news/ramadan:-a-time-for-nourishing-the-soul/32345/daily In any event, Amen!
Mark Kellner
6 years ago
Reading your comments Catholics fasting during Ramadan makes me wonder: Has America ever suggested that their readers fast on Yom Kippur, the Jewish Day of Atonement which presages the sacrifice of Jesus? St. John Paul II said the Jews were "dearly beloved brothers" and "in a certain way ... our elder brothers" during his visit to the Rome, Italy, Synagogue in 1986 (http://www.vatican.va/jubilee_2000/magazine/documents/ju_mag_01111997_p-42x_en.html). We all know, sadly too well, the persecutions and attacks Jews have endured during the past centuries and even today, simply because they are Jews. Might solidarity with these "dearly beloved ... elder brothers" also be in order?
Lenora Grimaud
6 years ago
I have to admit that I am a little confused about what you mean by "solidarity with our Muslim brothers and sisters." My understanding is that Ramadan is not just about prayer and fasting, or works of charity. There is a specific purpose involved. My understanding is that Ramadan is about one's commitment to the Quran and to Mohammed; that the Quran is the "Revelation" of Allah and calls for obedience. Muslims are expected to read the Quran and renew their belief and commitment to it. While the Quran may have some commonaliities with the Christian Scriptures, the "Revelation" of Jesus Christ, there are many discrepancies which make it impossible for Christians to enter ino solidarity with Muslims in regards to their purpose of Ramadan. In fact, it seems to me, that it would be hyprocrisy and heresy for Christians to do so. Christians can enter into solidarity with Muslims by both parties agreeing to pray for a common purpose, such as, world peace or for all those being unjustly persecuted and martyred for their faith; or by fasting, prayer, and reading the Gospels of Jesus Christ, recommitting themselves to honor their covenant with God. Nevertheless, I find it hard to understand why you, as a Catholic priest, would focus your attention on Muslims right now instead of the primary victims of Isis. Muslims in America should be asked to enter into solidarity with Christians, and Americans, right now, not the other way around. Americans today, regardless of what religion they belong to or don't belong to, are fearful of "Radical Muslim Terrorists." The welfare of the American people should be the priority of our Government and all religions in America. If you want to choose a tradition for solidarity, why not focus on July 4th, and freedom from tyranny.