Servant of the Servants of God 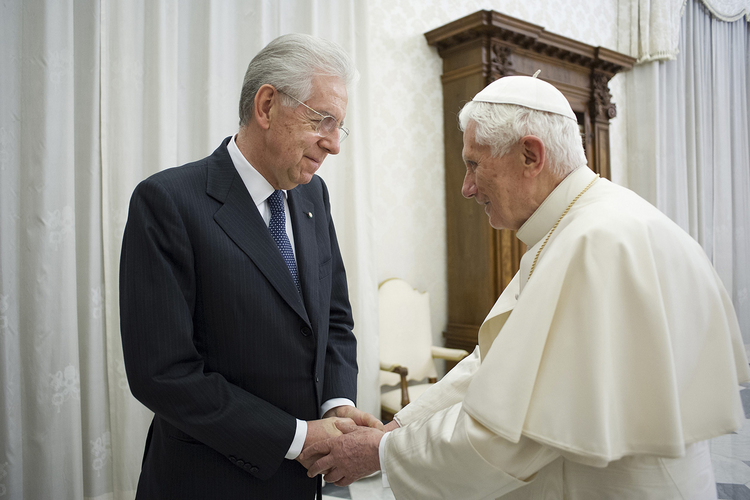 The shock of the resignation of Pope Benedict XVI continues to reverberate through the church. Reactions to his resignation understandably focus on his declining health and praise the Holy Father’s humility for being able to acknowledge that he is no longer physically up to the task. Alternative reactions have traced the historical precedents of previous papal resignations noting how incomparable those examples truly are to what we have recently witnessed. Neglected thus far, is the theological implication of Benedict’s historic resignation, the first papal resignation since the Second Vatican Council.

As a theologian, Benedict XVI chooses his words carefully, and does so in his announcement: "I have had to recognize my incapacity to adequately fulfill the ministry entrusted to me. For this reason, and well aware of the seriousness of this act, with full freedom I declare that I renounce the ministry of Bishop of Rome, Successor of Saint Peter, entrusted to me by the Cardinals on 19 April 2005…” In these words, Pope Benedict makes clear that the person of the pope is secondary to the ministry of the pope. Throughout history there has been a tendency to focus on the person of the pope. This focus made it impossible for many to conceive of a papal resignation, after all: “You do not resign being the father of the family.” Similarly, the longtime secretary to Pope John Paul II, Cardinal Dziwisz, explained John Paul II decision to remain in office despite his debilitating illness because, “you don’t get down from the Cross.”

Benedict XVI articulates a different point of view. His emphasis is on the ministry entrusted to him by the cardinals. He does not suggest that the papacy has bestowed on him a privileged place. He was entrusted with a ministry by the Cardinals and now it is time they entrust it to someone capable of fulfilling that ministry for the good of the church. In doing so, Pope Benedict extends the post-Vatican II tradition of demystifying the papacy and ever more strongly identifying it first and foremost as a ministry of service. Paul VI renounced the use of the papal tiara in favor of a bishop’s miter. John Paul I replaced a coronation ceremony with an Inauguration Mass whose crescendo was not a coronation but the placement of the bishop’s pallium. John Paul II did the same. In resigning his papacy when he no longer felt capable of fulfilling its responsibilities, Benedict XVI continues in that vein by demonstrating that all the baptized, even the Pope, come not to be served but to serve. In his own words: “The Church has for a long time now looked like a Church of baroque princes. It is now returning to the spirit of simplicity which marked its origins-when the “servant of God” chose to be a carpenter’s son on earth and chose fishermen as his first messengers.”

I suggest that Pope Benedict’s resignation is not rooted exclusively in his failing health but in his understanding of the theology of baptism and ministry that undergirds the Dogmatic Constitution on the Church, a document the young Josef Ratzinger is credited with shaping. It is the emphasis this document places on Christian life as a life of service in and for the gospel and the collegial relationship between the pope and college of bishops that makes this resignation not only possible, but an example of papal ministry.

The pope is referred to as “The servant of the servants of God.” This resignation challenges the entire church to be as selfless as he in service of the gospel. No wonder we are shocked.

Mark-David Janus is the president and publisher of Paulist Press.

Mark-David Janus
Show Comments (
3
)
Comments are automatically closed two weeks after an article's initial publication. See our comments policy for more.
Tom Gibbons
8 years 3 months ago
Thanks so much for this article. Those of us from the United States have a tendency to use our political language when describing this event in that we would say Benedict was stating that the "office" is more important than the "person." It's great to have the implications of his decision to be placed in theological language as well. Kudos!
Thomas Poovathinkal
8 years 3 months ago
Jesus called nobody for part-time following or even whole-time but with a divided heart.. And his own "doing the will of the Father" was not part-time or with a divided heart.
Andy Rudy
8 years 3 months ago
Thank you Mark-David. I would like to comment on one statement you made. “The Church has for a long time now looked like a Church of baroque princes. It is now returning to the spirit of simplicity which marked its origins-when the “servant of God” chose to be a carpenter’s son on earth and chose fishermen as his first messengers.” I think the Hierarchy could give the world a better view of servitude if they would dress more like a servant instead of "baroque princes" and remove the headdress and majestic cloaks they wear and enter a ceremony like a shepherd not a prince.