Scourge or Friend? Trying to Learn the Lessons of Human Dying 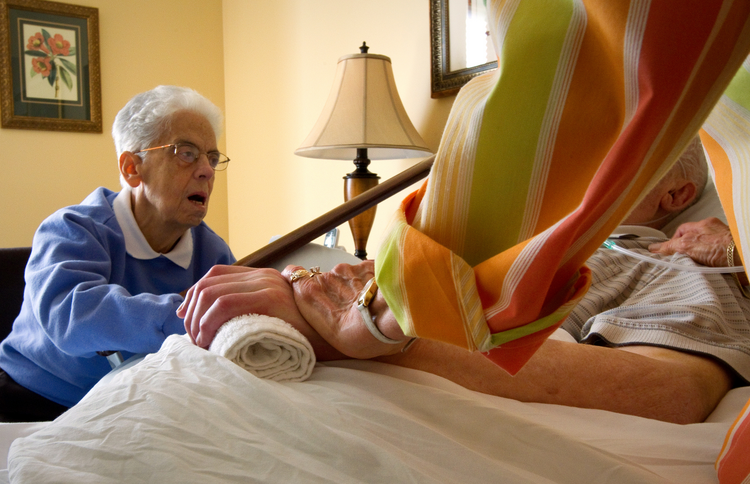 Is there anything good to be said for death? I’ve always hated references to “Sister Death”  (sorry, St. Francis) or “Death as Friend.” I’m also uneasy when Darwinian minded theologians defend death’s positive uses. Yes, I accept evolution and acknowledge that generations of organisms have died to produce the “wonderful life” of earth—including most famously, US!

But what do we do with the increasing evidence that our species’ dominance was built on genocidal killing of its hominin competitors? Telltale bones point to ancient genocide, murder and cannibalism. Competitive evolutionary selection brings bigger and bigger brains through deadly means. Yet it’s clear that enlarging brains also produced uniquely human goods: improved tools, social cooperation, altruism, language, art, music and religious worship. Moreover, as death’s apologists point out, even in modern times, the dying off of the old gives the energetic young their chance to create new achievements—including more effective weapons against death.

At this point amazing new advances in scientific and medical technology have given affluent populations the gift of extended lifespans. Humans can fulfill evolution’s imperative to survive and reproduce. They have time to raise their children and launch them into society. By dint of working for 50 years or more, people can create and sustain society’s institutions and cultural goods. But eventually, for most of us, a side effect of medically extended life span arrives. Among the increasing numbers of the “old-old,” frailty, fragility, deterioration and receding energy arise, along with dementia, disease and disability. You may not outlive your money but crucial abilities and capacities to serve others decline and disappear.

Newly prolonged periods of debility before death present complex physical, psychological and spiritual challenges. Christians need to take note and grapple with the hard and paradoxical questions surrounding death. Scourge or friend? “Cursed punishment for sin” or “necessary for seed’s sprouting”? For what it’s worth, I find the dissolution of one’s body and mental powers awful, but it also intensifies awareness and gratitude for their wondrous existence. How amazing to have consciously experienced my unique embodied, history. The horror of imminent and certain dying, magnifies every moment of still being alive. In fact, we are all dying here together and can recognize our equality as sharers of a common fate.

Contemplatives and good and holy mystics already have learned the lessons of human dying. They are prepared for death through long practice in dying to selfishness, and immersion in the Divine Presence. Mysticism has been defined as “the art of union with Reality,” (Evelyn Underhill) and dying is an unescapable part of the real. Indeed, all too real. For the fearful among us, God’s greater Reality of love, truth and courage needs to shore up our bones and enkindle our hearts. Alas, we can’t help remembering that the holiest of people can be afflicted in old age with depression, panic or Alzheimer’s disease. Not of course that any of these probabilities or eventualities will matter if Christ has not risen. As St. Paul knew, we then would be among those most to be pitied.

Sidney Callahan
Show Comments (
1
)
Comments are automatically closed two weeks after an article's initial publication. See our comments policy for more.
Bruce Snowden
6 years ago
"Scourge or Friend?" Death can be both or. Taken to its salvific understanding, for Jesus his scourging, his sufferings, were part of his reality of death, but also his friend as it helped him complete his reason for being Redeemer. For the rest of us death is friend that can also give quite a scourging as well a friend that walks us away from suffering to that place where Faith teaches "the best is yet to come." But also a scourge, which unless St. Paul has misled the Church, an absolute impossibility, helps through using our scourgings of any number, in union with Jesus, "to make-up what was lacking in the sufferings of Christ," nothing really, so there's mystery in that teaching. Or as the Little Poor Man from Assisi called death "sister" that is, biologically related - only that which is biological can die, called disintegration when dealing with inanimate creation, like rocks, which interestingly may have at one time been part of animate creation, following evolutionary intent to its now recognizable condition. So yes, death is a friend and a scourge as "crucial abilities and capabilities to serve others decline and disappear", but for us who believe in God, particularly in Jesus, it all makes abundant sense, making true the words, "O death, where is your victory, where is your sting!" That's my take.