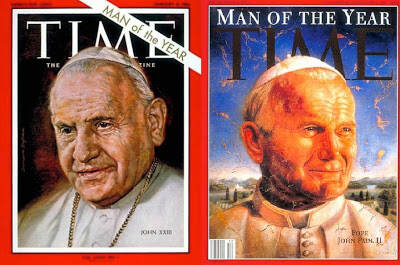 Update: The Vatican has announced the canonization date: April 27, 2014.

Today's announcement by Pope Francis of the canonization of Blessed John Paul II was not a surprise. From the time of his death in 2005, when crowds shouted "Santo Subito!" in St. Peter's Square, to Pope Benedict XVI's waiving of the normal five-year rule (the process of canonization normally doesn't begin until five years after a person's death) to this week's leaked news that the second required miracle had been approved, the official announcement had been expected.

What was not expected in today's announcement, which came during a meeting with the prefect of the Congregation for the Causes of Saints, was the approval of the canonization of Blessed John XXIII, whose process seemed to have languished in the past few years. Still more surprising was the news that the Pope had waived the standard second miracle. Federico Lombardi, SJ, the papal spokesperson, explained, "Despite the absence of a second miracle, it was the Pope's will that the Sainthood of the great Pope of the Second Vatican Council be recognized." Fr. Lombardi noted that of course the pope has the authority to "dispense" with that requirement, and also added that there had been discussions among theologians and experts about whether two miracles were needed for beatification and canonization. As ever, Pope Francis surprises. (Perhaps John XXIII's second miracle was the election of Francis.)

The two popes appeal to a wide variety of Catholics. John Paul's popularity seemed only to grow as his papacy continued, and has remained strong among Catholics since his death. A man of firm faith, a tireless evangelist, and a strong foe of both communism and poverty, John Paul II became, much as he might dislike the use of the word, a religious rock star. Perhaps the most admirable quality of the man was his determination: his early life laboring under a Communist regime in Poland, his incredible series of papal trips, and his long battle against Parkinson's disease showed the world spiritual grit. But the man some call John Paul the Great was not perfect: revelations about the crimes of Father Marcial Maciel, the disgraced founder of the Legion of Christ, who both fathered and abused children, cast doubts on John Paul's judgment. But no saint is without flaw: the saints themselves will tell you that.

The renown of John XXIII, on the other hand, seemed to declined among in some quarters of the church, though for those who love him, he is an immense hero. (Some of this decline was inevitable: the simple aging and death of those alive during his years as pope meant fewer admirers.)  Humble, humorous, affable, clever and creative, the man who convoked the Second Vatican Council, which came upon him, he said, not as the fruit of long meditation but, as "the flower of an unexpected spring," is beloved as "Good Pope John." But John XXIII was not, as some would have him, simply a jolly, roly-poly old man. A veteran diplomat and a well-read expert in church history, the former Patriarch of Venice was able to deftly steer the church towards the dangerous shores of renewal. He was also strong in his opposition to that worst of traits in the Catholic church: pessimism. In response to those who portended only peril and danger in the world, Pope John responded succinctly in his Opening Address to the Second Vatican Council: "We feel we must disagree with these prophets of gloom."  But neither was John XXIII perfect: a few point to his pontificate as the beginning of "drift" in the church, and to his Council as ultimately one that tilted too much towards the modern world.

The joint announcement by Pope Francis may strike some as simply a canny "move" on his part. The two popes are seen to appeal to different types of Catholics, and so this announcement will serve to unite these groups. For me, I deeply admire John Paul II, but John XXIII is a great hero. For some friends of mine, that statement would be reversed. But all, I hope can rejoice today.

But there is a much deeper message here, one that goes beyond what some might call church "politics." And that message is about the saints. John Paul and John XXXIII were alike in many ways: dedicated to Christ, devoted to Mary, faithful to the teachings of the church, smart, hardworking, clever, savvy, thoughtful.

In many ways, however, they were different. Karol Wojtyla seemed to have had a more melancholy air than Angelo Roncalli, who by most accounts, was a more lighthearted man, ever ready with a quip. (This is not to say that John Paul was humorless, but those who knew him tend to speak more often of his serious side.) John Paul seemed to relish his place on the world stage, as a way of communicating his faith, whereas John XXIII seemed somewhat more private, having written to his sister before the conclave that elected him in 1958, "Who wants to be more than a cardinal?" John Paul sometimes seemed more philosopher (one need only read his encyclicals for evidence of this) while John seemed more pastor (over the door to his study in Venice, Cardinal Roncalli placed the motto Pastor et Pater.) The two also approached church governance in different ways, worked with the Vatican curia in different ways, and appointed different kinds of bishops and archbishops during their papacies. More basically, friends of mine who knew both men describe their personalities in different ways.

But it has always been this way. Two things we must remember about the saints: First, they were not perfect. And second, as today's announcement reminds us, they are not cookie-cutter versions of one another. John Paul II and John XXIII may appeal to different types of Catholics because they were different types of people. And what the church is telling us today is that both types are saints.

Maybe John XXIII said it best, when speaking about the false idea that the saints were the same. In one of his journal entries, he wondered if he was called to be exactly like one of his great saints, the Jesuit Aloysius Gonzaga. No, he concluded, "I am not St. Aloysius, nor must I seek holiness in his particular way, but according to the requirements of my own nature, my own character and the different conditions of my life....If St. Aloysius had been as I am, he would have become holy in a different way."

James Martin, S.J.
@jamesmartinsj
Show Comments (
26
)
Comments are automatically closed two weeks after an article's initial publication. See our comments policy for more.
ROBERT STEWART
9 years 1 month ago
John XXII should have been declared a saint years ago, in my opinion. As a practicing Catholic who became an adult at the beginning of Vatican Council II and one who welcomed the renewal that came with Vatican Council II, I think it is not hyperbole to say that he changed the lives—and for the better—of my generation of Catholics, as well as many older faithful Catholics who were open to the Holy Spirit. He mediated the love of God and the hope brought to us via the Good News better than any pope I can remember; and I remember them all from Pope Pius XII to Francis (I think Francis may be able to do the same). Also, a special thanks to John XXIII and Pope Paul VI for the many pastoral bishops that were appointed in the United States. All that changed with John Paul II’s appointment of bishops. I think he did a terrible job in selecting bishops, and he did a terrible job in dealing with the sexual abuse crisis, especially when he gave unreserved support for Marcial Maciel Degollado , the former head of the Legionnaires of Christ. On the other hand, he did a great job in advancing Catholic Social Teaching; for that, I am very, very grateful.
Jim McCrea
9 years 1 month ago
I doubt that JPII ... or any pope ... actually selects bishops. He selects those who present him with the terna of names from which he chooses, most likely after advice from whomever gives him the list of names. JPII's failure was in choosing the advocates to whom he listened.
Iggy Taught Me
9 years 1 month ago
I think it is very telling that Francis I canonized John XXIII without the requisite second miracle, immediately after it was recognized that JPII's second miracle. I was elated with the canonization of John XXIII ( and agree with the statement that the elevation of Francis I is John XXIII's second miracle.)
Tim Reidy
9 years 1 month ago

Sir: Your user account will be blocked until your provide a full first name and last name as per our policy.