The Sacrament of Story & The Church of the Pub 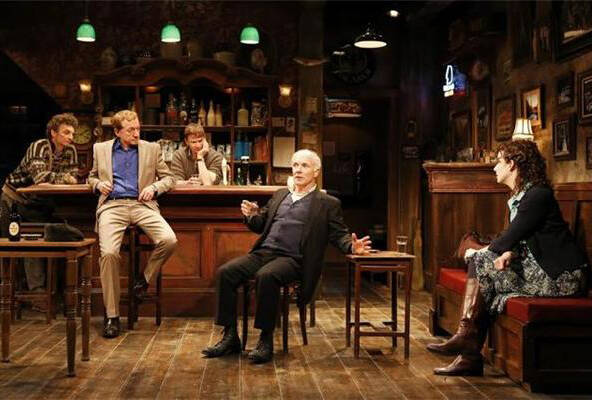 The local pub has traditionally been regarded as sacred space in Irish culture. Set apart from the arenas of ordinary life—the farm, the fishing boat, the office or place of business where one makes one’s living, and, perhaps most significantly, the home—the pub serves as a place apart, a communal gathering where (mostly) men leave behind the trials of daily existence to enjoy a few hours of company with their friends and neighbors. In the cozy setting of the bar, the peat fire flickering against the bottles ranged neatly along the shelves, warmed by a pint of porter or a glass of whiskey (or two), even the most beleaguered man can find some brief respite from his afflictions.

It is not the promise of drink alone that draws patrons to the pub—it is the occasion for human communion. The pub ministers to the needs of the body, true, but its deeper purpose is to minister to the needs of the soul. There is, in fact, a sacramental quality to the rituals that take place there—a liturgy, of sorts, sometimes involving Bread (food is served at most pubs), often involving Wine (or another fermented beverage that serves as “fruit of the vine, and work of human hands”), and always involving The Word. Perhaps it is this supernatural function that has inspired so many Irish dramatists, novelists, and poets to set their stories in the pub. This may seem counter-intuitive, in literary terms, since, by design, it is a resting place rather than a field of action. Not much seems to happen there. Besides drinking, what do people do in the pub? Chiefly, they talk. Yet herein lies the key, for the power of the pub draws its energy from the power of the stories that are told there, both by real people in real life and by the characters created by Irish writers.

This Irish Catholic mythos of the pub has been brought to life beautifully in the Irish Repertory Company’s fine new production of "The Weir" by Conor McPherson. The entire play, from start to finish, takes place within the single setting of Brendan’s bar. Characters make their entrance and take their leave through the one door on the left side of the stage—first Jack, the old man who lives above the bar, young Brendan, the owner, Jimmy, a middle-aged workingman who still lives with his “mammy,” Finbar, a local businessman who has done well (and lords his success over his former peers), and Valerie, a young woman from Dublin who accompanies Finbar. All of these characters, with the exception of Valerie, belong to the rural village in which they live. (We learn before their arrival that Valerie is moving into the neighborhood and that Finbar has been giving her a tour of the environs.) As each enters, he observes the same ritual—the hanging of his coat on the coatrack, the lament about the stormy weather (‘the wind is wild, but at least its balmy'), the rubbing together of his hands before the peat fire, and the ordering of a beer or a “small one,” or both, depending upon his habit.

There is humor and pathos in the predictability of their behaviors. We know that these same men gather in this same place every night and say the same things to one another. We know that Jimmy always pauses before he decides, inevitably, to have his whiskey, that Jack always arrives early and pours his first Guinness (though tonight the tap’s a bit wonky), and that Brendan will consider a drink only when invited by his fellows and only after ‘debating’ with himself as to whether he will. (He does.) There is also comfort in these proceedings. The men come there, night after night, precisely because they know that even as life outside the world of the pub is changing at a terrifying pace—a circumstance especially noticeable in rural Ireland, where the Celtic Tiger economy has brought foreigners into their enclave and disturbed their familiar village life—everything inside the pub stays the same.

In the course of the opening scene, however, we learn that even the sanctity of pub life is threatened by the incursion of strangers. Jack and Brendan complain about “the Germans” who will be occupying the pub in the coming months during the tourist season, inserting themselves into the community and ruining their rituals. Jack, in particular, resents the disruption of their little cult. This Irish distaste for foreigners is, of course, justified by a long history of being conquered and tyrannized by outsiders, but McPherson emphasizes the comic aspects of this deeply-founded distrust of “the other” by extending it even to fellow-Irish. The introduction of Valerie into the pub, who as both a woman and a Dubliner is doubly estranged from this County Leitrim men’s club, causes a revolution of their stilled world. Thus, McPherson sets the scene for drama of the best sort, and we, the audience, sit back and watch this static, calcified culture miraculously altered by the arrival of new person with a new voice and a new story to tell.

Or, rather, we, the audience, sit back and listen—for McPherson’s play is nothing if not poetry, albeit poetry salted with the rough language of the contemporary Irish workingman. As the drinks are drunk, and the wind howls outside, and the six slowly gravitate toward the fire, they begin to tell stories, in succession, each one more revealing than the last. The stories start off innocently enough—they begin with fairies, the stuff of Irish lore, and progress to ghosts who haunt the region, including the house that Valerie is moving into—gradually becoming more personal and consequential. All of the stories, in fact, are rooted in the supernatural, their common theme the ways in which the dead do not stay dead, the past haunts the present, and things are almost always not as they appear to be. Through this exchange, a bond forms among the members of the circle. They move closer to one another, physically, even as they bear their souls in what becomes a kind of ritual Confession, each seeking absolution for their moments of weakness, their failures of imagination, their sins of commission and omission. Their Words also constitute a kind of Eucharist, the bread that is broken and shared the tale of their own sufferings and sacrifices, and their implicit hope is that these might somehow be redeemed in the telling. Thus, story itself takes on the power of sacrament, and the talkers and hearers gathered around constitute Church.

Every Catholic community needs a priest, and the pub is no exception. Presiding over this sacramental exchange is Brendan, who serves drinks at the altar of the bar, ritually pouring from the tap, measuring out the whiskey, offering benediction (“Cheers, boys”), and even, at one point, rummaging through his house for a bottle of wine in order to accommodate his unexpected guest. (The miracle of Cana is not without relevance, and though this be no wedding feast, it might prove the prelude to one.) It is Brendan’s role to welcome both friend and stranger, to provide a sympathetic ear, and to create the circumstances wherein his “people” might find balm for their troubled souls.

Interestingly, it is Brendan alone, of all the characters, who does not tell a story. As "The Weir" came to an end, this omission surprised me. I realized that I had been expecting his story to be the last, the biggest, the one that trumped all the others. But as I’ve turned the play over in my mind, the stories echoing through the succeeding hours and days, I’ve come to understand his seeming silence serves a purpose. As with the presiding priest—and as with the playwright—Brendan’s particular story doesn’t matter. He is present to fulfill a holy office—to channel the single human story of suffering and salvation as articulated by the individual men and women gathered beneath his roof. Brendan and his creator, Conor McPherson, understand their role and its divine provenance. “Wherever two or more are gathered, I am among them”—watching with kind eyes, listening with a generous heart, wiping down the bar, filling up the cup.

Angela Alaimo O’Donnell, a columnist for America, is a poet, professor of English and associate director of the Curran Center for American Catholic Studies at Fordham University.

Angela Alaimo O'Donnell
@aodonnellangela
Show Comments (
3
)
Comments are automatically closed two weeks after an article's initial publication. See our comments policy for more.
Bill Mazzella
9 years 4 months ago
Is the "moral" of the story that at the Eucharist the people have to drink more and the priest should say less.? Wouldn't people choose this pub over the Eucharist most of the time? If the Eucharist were that uniting would the soccer game cease to be an excuse and would Dad be less tired and round up all for Mass? The ball game and the Pub seem to bring more unity, contrition and fellowship.
Angela O'Donnell
9 years 4 months ago

These are excellent parallels, Bill.  The ball game, the pub--the Bruce Springsteen concert and the poetry reading, for that matter--are all forms of artistic Making and serve as analogues to Eucharist.  As English Catholic poet, David Jones, once wrote, "Man is unavoidably a Sacramentalist."  We make sacrament and devise sacramental ritual every day, all the time.  Jones argues (quite persuasively, I might add) that it is this human love of Art & Sacrament that Christ was tapping into when he instituted the original Eucharist in the Upper Room.  Why this need to choose among these practices, to create categories of "better" and "worse"? Seen through the eyes of the Catholic Imagination, it's all of a piece.  The fact that we have so much available to us, as embodied human beings in a radically sacramental world, is a cause for celebration.

Bill Mazzella
9 years 4 months ago
Pope Francis understands the Church as Sacrament as seen in his talk on catechesis today. He talks of speaking of the church as we and us. Not as that object. The clerical culture will need overhauling for that to happen.