Room for Forgiveness, Caring and Starting Over in the Church 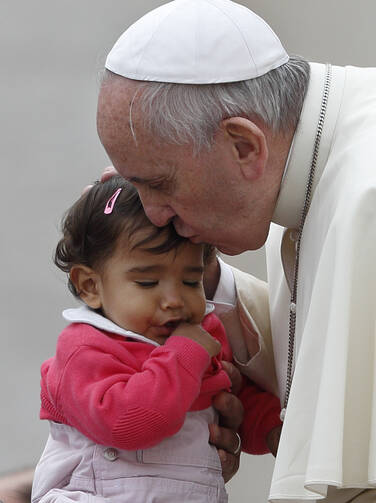 As the occasional wag has said, The New York Times is fascinated by the Catholic Church because it cannot imagine any other institution that claims infallibility.

That came to mind October 26, when columnist Ross Douthat cavalierly suggested that Catholics help Pope Francis exercise his Petrine ministry by resisting him. Such hubris is breathtaking even for The Times.

This call for religious rebellion comes in the op-ed, "The Pope and the Precipice.” The piece is filled with presumptions about who is a loyal Catholic. The column resists ideas about revising the annulment process and steps to allow persons who have divorced and remarried to receive Holy Communion. Mr. Douthat connects the issue to an overall change in tone proposed by some bishops at the recent Synod on the Family who spoke pastorally about same-sex and other relationships, such as living together without benefit of wedlock.

Mr. Douthat seems to reject any Catholic nuance when it comes to dealing with morality. He also seems to ignore the fact that most bishops at the synod were appointed to the episcopate by St. John Paul II and Pope Benedict XVI, both known for vetting candidates for theological orthodoxy and loyalty to the magisterium. This was no renegade cabal.

The Synod Fathers recognize that their people seek pastoral language and approaches when dealing with issues of marriage, family and sexuality. Good Catholic families deal with how to welcome gay adult children and their partners and friends into their homes. None want their children spoken of or treated as pariahs. Many parents feel that to reject their children is to reject the parents as well. This is a reality pastors must deal with, as loyal parishioners seek their pastor’s help in doing so.

In the spirit of Chicken Little, Mr. Douthat opines that what he sees as a reversal on admitting to Communion those in a second marriage without an annulment “would put the church on the brink of a precipice.” He adds that it would offend “the people who have who have done the most to keep the church vital in an age of institutional decline: who have given their energy, time and money in an era when the church is stained by scandal, who have struggled to raise families and live up to demanding teachings, who have joined the priesthood and religious life in an age when those vocations are not as honored as they once were.

“They have kept the faith among moral betrayals by their leaders; they do not deserve a theological betrayal,” Mr. Douthat writes. He tosses in words like schism, apocalypticism and paranoia for good measure too.

Mr. Douthat is wrong on many counts. Even if the people he lionizes were paragons of Catholic virtue, the church does not develop doctrine on the basis on who has done the church favors over the past 30 years.

The suggestion that fidelity means inflexibility is staggering. As someone who for years did not eat meat on Friday and covered her head in church even just for a visit to the Blessed Sacrament, I can personally testify that change in the church does not portend the apocalypse. It does not mean rejection of the Trinity and other tenets of Catholicism. A lot more serious changes and developments, such as reintroducing permanent deacons into church life and the change of the Sacrament of Extreme Unction to the Sacrament of the Sick, also must be heralded as moments of healthy growth in the church.

To emphasize that the church needs to act and speak pastorally is not a dismissal of the heart of Christianity, whose founder said there is no greater love than to give up one’s life for a friend. Forgiveness, caring and allowing people the opportunity to start over are not anathema to the church.