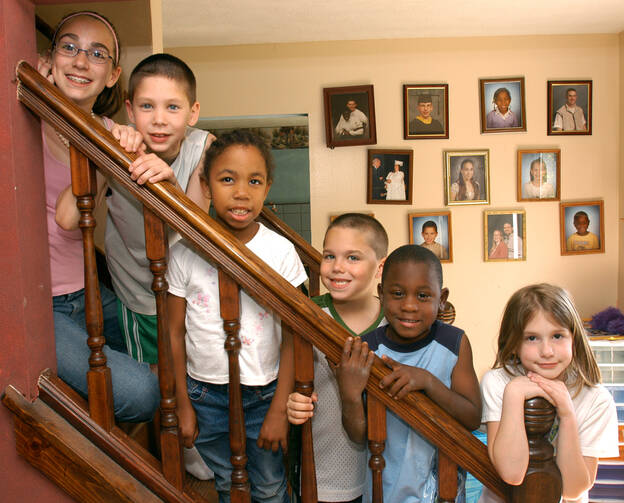 The U.S. Supreme Court is now considering the issue of same-sex marriage. Like many people, I have been following whatever news and commentary I can find. One thing has struck me by its total absence: While there is much discussion about the civil (and human) rights of adults, there has been no discussion at all concerning the rights of future children who may be born or adopted into new forms of legally sanctioned family structure.

Let me be clear and emphatic: I agree 110 percent that lesbian, gay, bisexual, and transsexual people need to be protected from what is legally termed “invidious discrimination," particularly in reference to the work place, public places, housing, education and health care. All of us should have equal civil and human rights in those areas. If matrimony is a civil right and/or a human right, then LGBT persons should have a right to civil marriage.

However, there are two other closely related questions about "rights" just barely below the surface when marriage is given a new definition: 1) Do all persons have a civil right and/or a human right to have a child? And 2) do all children have a right to be born via a pairing of biological parents, female and male, and to be raised by them, unless a grievous circumstance arises that prevents it? These are two very tough questions—tougher than they may appear at first glance.

We in the Unuted States believe, as per our Declaration of Independence, that there are “certain unalienable rights, that among these are life, liberty, and the pursuit of happiness.” We further believe that this “pursuit of happiness” may be pursued only to the extent that the pursuit does not infringe on the rights of others and we have many laws reflecting this. Herein lies the conflict between the above two tough questions. If the child has an inalienable human right to be born via a pairing of biological female/male parents, then how can all persons (singly or in pairs, heterosexual or homosexual) have a right to pursue their happiness in a manner that deprives a child of her/his rights?

The above question is not merely academic and it is not merely a question that applies to same-sex marriage—not at all. We already have the technological capacity, and have had for some time now, via “assisted reproductive technology” (ART) to create children via anonymous sperm and/or egg donation who are deprived of access to their biological mothers and fathers—some children are already being born in surrogate wombs, belonging to women who have no biological relationship to the children they carry and soon artificial wombs (ectogenesis) will be available. As the father of two adopted children, my now adult children and I can tell you that this deprivation is a very serious thing. Being denied access to your biological parents is a tough road to travel, a human right has been taken away.

The “law of unintended consequences” enters into the picture when marriage is up for redefinition. Along our journey together in the commendable pursuit of protecting LGBT citizens from invidious discrimination, no one intended that we should create a situation whereby the rights of children would be thrown aside. No one involved, on whatever side of the debate, has been motivated by trying to figure out a way to deprive children of their human rights. This thorny issue has slipped into the room when nobody was looking.

In fact, ART has already been throwing these children’s rights aside for some time. Another “unintended consequence” of the same-sex marriage debate is that it may well cause us as a society to take a long overdue look at the morality of the myriad forms of assisted reproductive technologies now at our disposal. We are playing with lives and rights here: not only pertaining to the adults involved, but more importantly pertaining to the children involved.

The question is not whether or not LGBT persons can “be good parents.” Some will be good and some will be bad. People are people. And, hey, there are plenty of heterosexual persons who are really bad parents—I may be one myself. The real issue is not about the parents. The real issue is about the child’s right to be born via a biological mother and father and to have access to those biological parents—this issue pertains regardless of the parents’ sexual preferences and gender identities.

Let us all hope that the Supreme Court realizes how complicated these questions are.

John Nassivera is a Life Fellow of Columbia University’s Society of Fellows in the Humanities and the author of God.org: Why Religion Really Matters. He lives in Vermont.