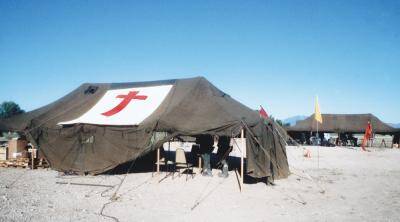 This is part of an occasional series of blogs looking back on the Synod of Bishops on the Family in October 2014. To submit an entry to the series, email webeditor@americamagazine.org.

Though the media was prone to cast the Synod on the Family as a clash between so-called conservatives and liberals on such questions as the acceptance of gays or communion for divorced and remarried Catholics, the real question raised at the bishops meeting was simply, what is the church for? How this question is answered reveals the very conception of one's experience of the church and salvation.

When Pope Francis likened the church to a field hospital after a battle (America, Sept. 30, 2013), he captured something essential about the church. The church isn't for those who are saved but for those who are in need of salvation. The argument that the purpose of the church is to defend the traditional family simply boils down to semi-pelegianism; it doesn't meet men and women where they are in their real lives. Nor does this position invite men and women in diverse circumstances to participate in the drama of salvation history.

When the synod's midterm report affirmed that gays bring unique gifts to the church community and that same-sex unions reflect positive aspects of support for each partner, the synod captured the reality of what the church is for. If the grace of the church cannot reach out and embrace individuals in the myriad of non-traditional situations in the world today, then it has lost its mission.

The church thus becomes no longer a field hospital but a refuge for the saved.

Is salvation an experience that unfolds in the lives of individuals as the grace of the church transforms the person on a journey towards union with Christ? Or can salvation only place within a prescribed moral framework? If the answer is the latter, then the mission of the church is no longer transformational; no longer a field hospital, it becomes a bunker to defend against attack. It becomes simply a gathering place for those able to affect their own salvation.

The triumph of the Synod on the Family is that it began to unearth the very nature of salvation and its relevance to real peoples' lives. Pope Francis is to be applauded for helping us to remember the church's very purpose.

Mark Tedesco is the author of That Undeniable Longing: My Road to and from the Priestood.

Mark Tedesco
Show Comments (
2
)
Comments are automatically closed two weeks after an article's initial publication. See our comments policy for more.
Tim O'Leary
7 years 5 months ago
I completely agree that the Church needs to reach out to the lost sheep or "those who are in need of salvation." to keep with the field hospital analogy, it is only a hospital if it offers real spiritual care. The field hospital cannot be a mirage, or offer poison or quackery instead of truly saving medicine. But, I disagree with the author in the categorization of the "saved" vs. the lost. It is a Protestant idea that anyone living can be certain he/she is saved. All are in need of repentance and forgiveness. As Jesus preached: "The time has come," he said. "The kingdom of God has come near. Repent and believe the good news!" (Mk 1:15), and, as the first pope said: "Repent, then, and turn to God, so that your sins may be wiped out, that times of refreshing may come from the Lord." (Acts 3:19)
Andrew Turnbull
7 years 5 months ago
So are you suggesting the Church should make wholesale changes to its teachings on sexuality and marriage?