Responding to the Syrian Refugee Crisis 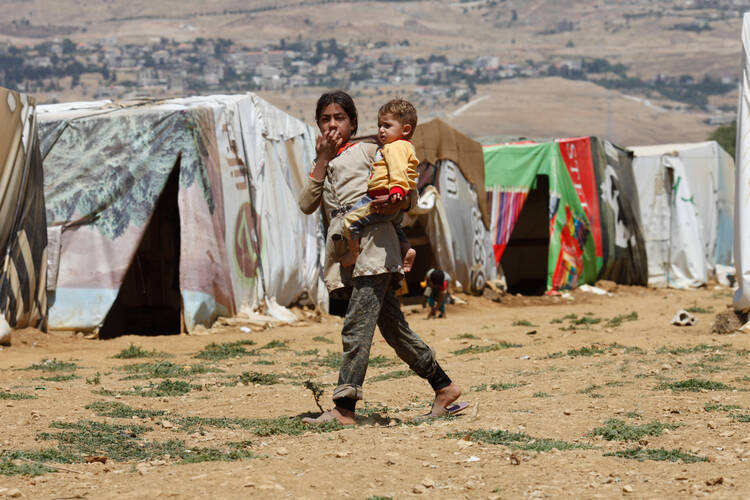 Refugees are the “first victims” of the ongoing conflict in Syria and “the ones paying the highest price,” said Archbishop Francis A. Chullikatt at The Humanitarian Response to the Middle East Refugee Crisis, a side event to the 2013 High-Level Dialogue held on Oct. 4. Chullikatt, the Permanent Observer of the Holy See to the United Nations, moderated the panel discussion, which featured representatives from various aid groups working in the region, including Catholic Relief Services and the Caritas Lebanon Migrant Center.

The participants warned that a U.S.-led strike against the regime of Bashar al-Assad, which appeared all but inevitable in the days following the Aug. 21 chemical weapons attack, would only increase the suffering of displaced civilians, and thus welcomed the recent diplomatic breakthrough. But as the world’s attention turns to ensuring the safe and timely destruction of Syria’s chemical weapons arsenal, the civil war grinds on and the humanitarian crisis deepens.

The sheer numbers are staggering: the official figure—2 million—does not include the refugees who for various reasons have not registered with the United Nations; nor does it account for the estimated 4 to 5 million internally displaced Syrians. Though less visible to the outside world, IDPs “are always affected and often times there is no one to look after them,” lamented Chullikatt. Grainne O’Hara, a senior officer at the UN High Commissioner for Refugees, said that these huge numbers give “a sense of the stress that is being placed on the neighboring countries,” and as more IDPs flow out of Syria, “that of course is going to create more pressure.”

“Meeting the basic needs of refugees demands the active commitment and engagement of the international community,” said the Most Reverend Nicholas DiMarzio, Bishop of Brooklyn, in a statement delivered at the event. As the speakers described their experience responding to this call to action in Syria and throughout the Middle East, several challenges emerged as particularly critical at this juncture:

1. Long-term needs. In the first months of the conflict the UN and other aid providers prioritized getting food assistance to displaced and besieged populations. Two years on, the trauma and uncertainty of the situation is exacting a heavy toll: Children are unable to attend school, many refugees lack access to medical and psychiatric services and those attempting to build a new life in overstretched host countries have trouble finding housing and employment.

2. Vulnerable populations. Women, children, the elderly and disabled persons are at particular risk. Sexual abuse is a serious problem and the stress placed on husbands and fathers unable to find work has sparked an increase in domestic violence. Religious minorities are also “at great peril,” said Bishop DiMarzio; “Alawites to their coffins, Christians to Lebanon” is reported to be a common refrain among some rebel groups.

3. Winterization. The precarious situation of vulnerable populations is aggravated in the cold winter months and aid agencies worry about securing adequate funds to provide warm clothes, heating fuel and food.

The efficient provision of humanitarian assistance has been hindered by a lack of coordination between the many aid groups working within Syria and neighboring nations. Najla Chahda, director of the Caritas Lebanon Migrant Center, said that too much money has gone toward infrastructure for international NGOs “because they were not present in the country, while we could have served better the refugees if we had focused on direct services with coordination with existing structures.”

While the difficulties are great, so too is the dedication of individuals working to alleviate the suffering of those whose lives have been uprooted by the war. Forty-two Catholic institutions operate in the region and they do so, Archbishop Chullikatt said, “not because anyone asked” but because “it is in the DNA of the Catholic Church.” Catholic Relief Services has been serving out this mission for 70 years, said the organization’s regional representative Donald Rogers, and will continue to do so in and around Syria until the world can find “a negotiated peaceful resolution to the violence, one the respects human rights and religious freedom.”