Responding in the Name of Religious Freedom 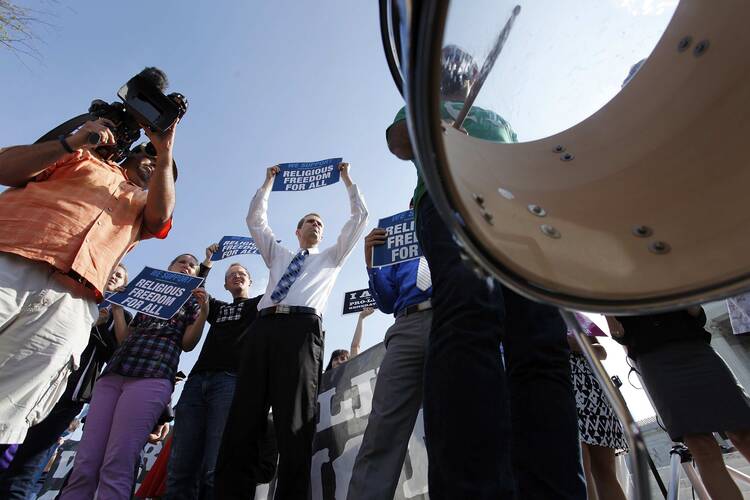 Today’s Supreme Court decision in Hobby Lobby and Conestoga Wood case is as big a deal as it seems. It is a legal feast for First Amendment scholars, treating as it does so many of the sub-issues involved in Free Exercise litigation.

Plaintiffs were challenging a Department of Health and Human Services (HHS) regulation requiring employers to provide health insurance that included (without a co-pay) all FDA-approved contraceptives and emergency contraceptives. The two for-profit corporations involved were unwilling to cover Plan B and Ella (morning after drugs) and two forms of IUDs because manufacturers of these products acknowledge that can act to destroy already-formed human embryos. HHS did not dispute this. The companies sued under the Religious Freedom Restoration Act (RFRA), which requires that when a federal law substantially burdens religion, the law may not stand unless the government can demonstrate that it serves a “compelling state interest” by the means “least restrictive” of religious freedom. The decision today held the following:

On the one hand, the Court indicated that the government could simply provide women contraception directly as a way of satisfying its interests. On the other hand, the Court also stated that by granting for-profit corporations the same “accommodation” it was providing religious non-profits, it could satisfy the “least restrictive means” test. Could this indicate that groups like the Little Sisters of the Poor—who have this “accommodation” but who still hold that “facilitating” others’ purchasing contraception for their employees violates their conscience—are already the beneficiary of a “least restrictive means” law? The majority explicitly stated that it was not deciding this question for all religious claimants.

The Court was also careful to draw lines answering the “worst case scenarios” suggested by Justice Ginsburg’s dissent. The decision limited its holding to the law at issue (the mandate regarding contraceptives and morning-after drugs). It did not extend itself to cover medical procedures generally (e.g., immunizations, blood transfusions), and stated directly that it is no barrier to holding corporations responsible for abiding by nondiscrimination in employment laws, given the strength of governmental interests in these.

In my view, because no citizen can be sure whether or not they will enjoy a federal government suited to their political tastes, this case is a nonpartisan victory for the religious freedom of individuals to be free from laws burdening their religious freedom.

Helen M. Alvaré
Show Comments (
3
)
Comments are automatically closed two weeks after an article's initial publication. See our comments policy for more.
Chris Sullivan
8 years 1 month ago
A question: does the ruling apply to all forms of contraception, or only the 4 types which Hobby Lobby worried mght be abortifacient ? God Bless
Steven Reynolds
8 years 1 month ago
I suspect the opinions taken as a whole provide the likely answer for the inevitable future case from religious non-profits on whether contraception mandate is a compelling state interest - Kennedy in his concurrence makes that finding and so there may be 5 votes with the dissenters here on a future case. Another aspect of the case that will be troubling to those who dive into it is that the extent to which Justices Alito (court's opinion) and Ginsburg (the dissent) disagree about the text and history of RFRA. Having no expertise there and not desiring to read legislative history, it leaves you wondering. I must admit I also found much of Alito's argument about closely-held corporations vs. large companies and state corporate law resolving questions to be confused. These were good facts for this challenge - the companies had convincing arguments that they were family-controlled and motivated by religious viewpoints not simply profit maximizing and the objection to four-specific contraceptive methods that serve as abortifacts.
Tim O'Leary
8 years 1 month ago
The Supreme's 5-4 vote and its very limited ruling does not give me much confidence that our religious rights are secure. Obamacare is a Trojan horse, offering the gift of healthcare, but filled with soldiers in the War against Religion. As the U2 Vertigo song goes, "All of this... all of this can be yours - Just give me what I want and no one gets hurt."