Respect, Humility and Truth-Telling: A Response to America's Editorial on Same-Sex Marriage

Respect, Humility and Truth-Telling: A Response to America's Editorial on Same-Sex Marriage 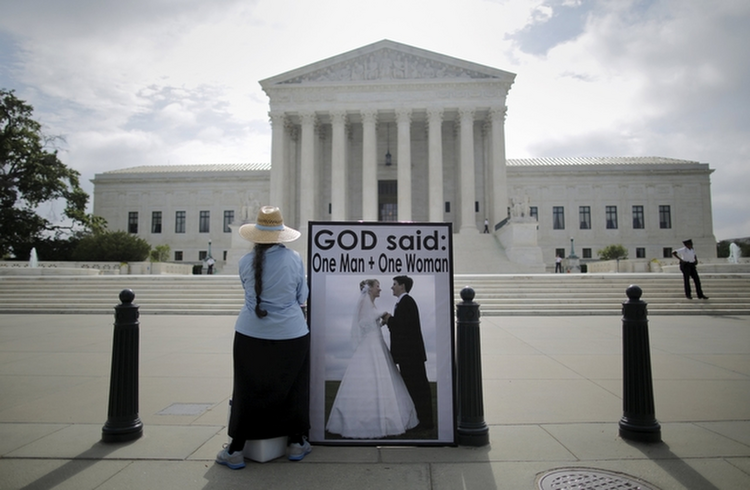 I found much prudential and sensible pastoral exhortation in America’s editorial on the Supreme Court decision regarding same sex marriage (“After Obergefell,” 7/20). And that, in my view, is both its strength and its weakness.

Appeal is made to Catholics to proceed in the decision’s aftermath with “humility” and “respect,” as they engage in the public conversation. Such virtues are, indeed, indispensable. But so are their sister virtues of “truth-telling” and “parrhesia” (a favorite of Pope Francis), which the editorial largely neglects.

Thus the editorial runs the risk of being read to support the disjunction between the “pastoral” and the “doctrinal” that has bedeviled discussions of the coming Synod. Citing Cardinal Marx does not dispel the concern that this disjunction may, in fact, be operative.

The editors persuasively quote Pope Francis that “the first proclamation” must be: “Jesus Christ has saved you.” The challenge we face as church, however, especially in North America and Europe, is to proclaim this Good News to a culture that too often reduces “salvation” to a therapeutic and individualist “flourishing.” Francis himself understands this. Hence the importance of his discernment of the counterfeits of authentic human flourishing in chapter three of “Laudato Si’,” “The Human Roots of the Ecological Crisis,” and his insistence in chapter four on the imperative for an “Integral Ecology.”

As it stands, the editorial’s well-intentioned pastoral accommodation can slip too easily into cultural capitulation (of the sort one seems currently to be witnessing in a number of Catholic universities).

Rev. Robert P. Imbelli, a priest of the Archdiocese of New York, is emeritus associate professor of theology at Boston College.

Show Comments (
3
)
Comments are automatically closed two weeks after an article's initial publication. See our comments policy for more.
Barry Fitzpatrick
4 years 8 months ago
Fr Imbelli cannot resist the blanket condemnation, as he signs off, of "a number of Catholic universities." I am reminded of the wisdom of an old teacher, sarcastically delivered, that he was glad that there were at least some critics upholding the values that they thought I had so long ago abandoned. Fr Imbelli does nothing to expand the pastoral accommodation, rather he minimizes it by rushing to judgment that those of us who seek just such a humble and pastoral approach have "culturally capitulated" once again. Perhaps we have culturally embraced our brothers and sisters in ways heretofore unheard or unimagined, embracing them in the arms of the same loving God who loves us ALL beyond measure.
Alan Mitchell
4 years 8 months ago
Ancient psychagogues like Philodemus of Gadara caution about how parrhesia should be used. There is frank speech and there is frank speech. Tell us, Fr. Imbelli, how you understand the application of parrhesia should be made regarding the topic at hand.
L J
4 years 8 months ago
It is unfortunate that a faculty member from Boston College (is it still Catholic?) would be throwing stones at the notion of "speak the truth in love". My comment "is it still Catholic?" is a form of parrhesia. It is also polemic. Likewise, calling out - casting aspersions - on those who would invite the nation to be more irenic in their interest of being more parrhesia-like (polemic) adds nothing to the Anima Christi. Why is it so important to some to be war-like? What is it about them that they must toss over tables, pull out the whips and scream and shout? What are they telling us about their spirit? Raymond Burke (is he still a Cardinal?) comes to mind. . Americans have no problem being parrhesia-like. Witness this post in response to Imbelli's parrhesia-like reply to the Editors of America. There is no gift at being parrhesia-like. Freedom of speech (parrhesia) must be tempered with love. Bravo America Magazine for suggesting, nay gently nudging, American Catholics to be more like Pope Francis than Savonarola. Can we now put away our weapons? "Turn me over, I'm done on this side!" - St Lawrence, Martyr
Advertisement