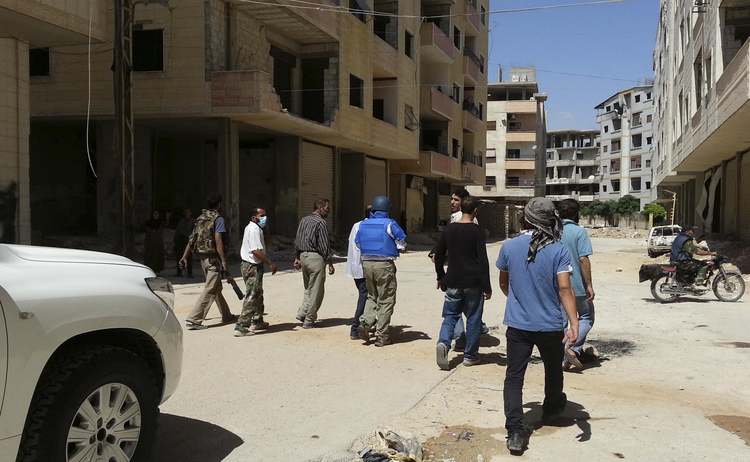 The videos of children and adults in the Damascus suburbs in convulsions and gasping for air after inhaling airborne nerve agents apparently dispersed in the Damascus suburbs on Aug. 21 were a horror to watch. If the U.N. Observers find that the casualties were indeed the results of banned chemical agents, the massacre was certainly a war crime. But, after so much harm has been suffered in the Syrian civil war, is punishing Syria’s military for this one criminal attack reason enough for the U.S. to launch punitive attacks against its military assets at this time?

International military law does allow punitive attacks to discourage further violations of the laws of war, and President Barack Obama had drawn a red line against the use of chemical weapons. But against the background of more than 100,000 dead, many of them from indiscriminate Syrian government attacks on civilians, what makes these recent deaths so significant that a limited intervention is called for now?

Thousands of the regime’s victims, moreover, were non-threatening protestors murdered before the armed uprising began. Syria has been a case of successive failures by the world community to exercise the Responsibility to Protect. Why does a chemical attack count more than so many other attacks on civilians?

Chemical agents have particularly horrific effects, and that is why they were banned after World War I. They have not been used in this instance on anywhere near the scale they were in the Great War. It matters, however, that the prohibition has been broken, and the case can be made to use military force to punish the violation within the bounds of international war to re-enforce the prohibition.

But, if this breech does not become a tactical pattern for the Syrian military and/or does not open the way for others to do the same, it may be more prudent, given the complications of this war and the uncertainties of great power intervention, which the U.S. public now know all too well, to hold off on limited retaliation and find other ways, like prosecution, to provide a remedy for the chemical attacks.

What concerns me more, and I think, should concern policymakers, is that the international community has come to no workable way, not just to stop the war, but specifically to prevent the Assad government’s attacks on civilians. The Responsibility to Protect has become a dead letter in Syria.

In countless attacks, Mr. Assad has chosen to assert his power in the most cruel way by direct attacks on civilians. That’s the fundamental crime in this war. Especially in civil wars, civilians are likely to be casualties. At present, there is no easy remedy for Assad’s attacks on civilians, given the virtual immunity Russia has granted its ally. But that is the task the Obama Administration and world leaders must undertake.

Instead of a feckless punitive attack with no strategic gain, what is needed is a concerted and sustained effort to aid Syria’s civilian population. First, efforts should be undertaken to negotiate access for the International Committee of the Red Cross and other humanitarian organizations to population in need. Secondly, charges against the Assad regime should be brought in the International Criminal Court and other available venues to insure justice for its victims--at least in the long run. Thirdly, serious attempts should be made to train and arm trusted secular and moderate religious elements in the resistance to Assad.

In the long term, solutions must be found for the international community to enforce the Responsibility to Protect without veto from the Russians or any other power. That may mean resorting to the U.N. General Assembly, as was done in the case of the Korean War, or setting a time limit on a veto, or granting permission for ad-hoc alliances to act after certain thresholds of violence have been met.

The alleged chemical attacks are a problem, but the greater problem is lack of means for the international community to rescue innocents from slaughter by their own governments.

Drew Christiansen, S.J., a visiting scholar at Boston College, is the former editor in chief of America.

Drew Christiansen
Show Comments (
2
)
Comments are automatically closed two weeks after an article's initial publication. See our comments policy for more.
Laicus Romanus
7 years 6 months ago
The claim that "international military law does allow punitive attacks" is essentially wrong. Any kind of attack is allowed within any legally undertaken war. However, the war the United States is preparing in Syria is not legal under International Law. The UN security council is likely to be bypassed. The United States is most likely going to attack Syria without a declaration of War like the Japanese did at Pearl Harbor in 1941. Even if Barack Obama is not tried during his lifetime like the Japanese leaders of that time, US citizens in the future, Barack Obama's grandchildren or others may have to pay for the harm done. It's the china shop rule — you break it you own it. And of course, the United States is not allowed under international law do draw red lines. Only the Security Council is allowed to draw red lines. The reasons why the planned US war in Syria is a sin, not fitting the just war criteria, have been explained by a French bishop in http://www.la-croix.com/Religion/Actualite/Le-Saint-Siege-profondement-oppose-a-une-intervention-militaire-en-Syrie-2013-08-28-1003530
Mary Sweeney
7 years 6 months ago
"Why does a chemical attack count more than so many other attacks on civilians?" Because you can't see it, taste it, defend against it and it is easily transported and could easily wind up in your subway??? Oh, and does anyone remember Hitler and the gas chambers?