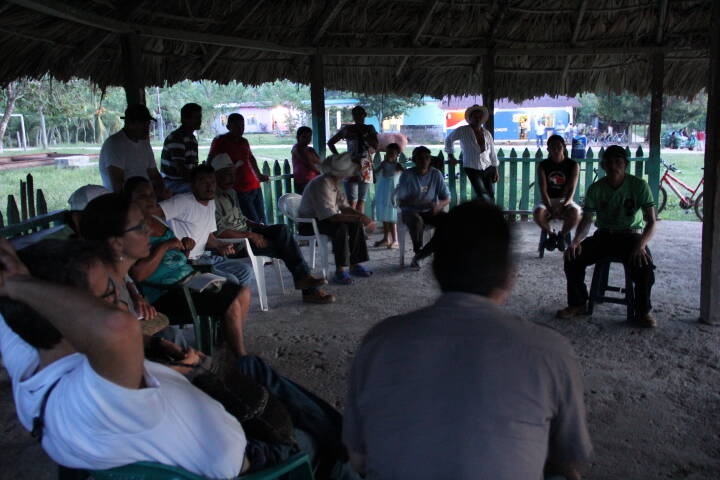 The old campesino spoke calmly, yet conveyed a deep sense of urgency. “We have been threatened,” he told us through an interpreter, “because we have defended the poorest people, the land and the water.” In February, he explained, members of his village in northern Honduras helped hang a chain in front of his house to send a clear message to the mining company: we are not selling; stay away from our land. The next day, he said, the police arrived, shot down the chain, asked for their names and promised to return.

On Tuesday afternoon I listened to this story at a dining room table in Nuestra Señora del Pilar de Arizona Parish in the Florida district of Honduras. The experience of campesinos in the community, who face constant threats and intimidation from mining companies intent on exploiting the land the campesinos have lived on and farmed for generations, helped transform their parish priest and local bishop into passionate defenders of human rights.

This is just one story among many I have heard this week as I travel across Honduras with a delegation sponsored by the Jesuits’ national office in Washington, D.C. The purpose of the delegation is to learn more about the political and social challenges facing Honduran society, the response of the church, U.S. policy toward Honduras and how we—representing Jesuit ministries in the United States and Canada—might be in greater solidarity with Jesuits in Honduras and the communities they work with. This month we also remember the 30th anniversary of the disappearance of Jim (Guadalupe) Carney, S.J., a beloved missionary from St. Louis, Mo., who worked among Honduran peasants in the 1960s and 70s. On Monday evening we visited a community named after him.

Delegation members include Shaina Aber, policy director for the Jesuits’ social and international ministries, Rafael García, S.J., pastor of Immaculate Conception Parish in Albuquerque, N.M., Fernando Serrano, a professor in the College of Public Health and Social Justice at Saint Louis University, and other leaders of Jesuit social justice apostolates. Our host in Honduras is Ismael Moreno Coto, S.J., commonly known as Padre Melo, director of Radio Progreso and a Jesuit-sponsored social research and advocacy center. While our traveling is extensive, our home base is the Jesuit community at the Colégio de San Jose in El Progreso.

So far this week we have met with campesinos struggling to defend or recuperate their land from mining companies, community leaders doing research and advocacy, a young Honduran man accused of murdering a landowner and currently living on a penal farm, Jesuits engaged in ministry ranging from parish work to directing the community’s theater production, a sociologist and economist specializing in the increasing militarization of Honduran society, the female rector (president) of the country’s most prestigious university, and church leaders who have spoken forcefully about the human rights of their people and the urgent need to protect the environment.

These groups and individuals have basically identified four issues, undoubtedly connected, as the most pressing. Mining. Six months ago a new law opened the door to further exploration of mining sites. Bishop Michael Lenihan, O.F.M., of the Diocese of La Ceiba told us that people are forced at gunpoint to sell their land to mining companies. We met with families displaced from their land and community leaders who face regular intimidation and threats. Padre Cesar, a Claretian, told us through an interpreter, “For those concerned about human rights, this is a grave situation. You live in Honduras without knowing whether you will see the next day.” Drug trafficking and gang violence. As drugs are pushed north to the United States, the murder rate in Honduras (86 per 100,000 inhabitants) has climbed to the highest in the world. Yesterday a sociologist in Tegucigalpa, the capital city, told us that international partners have had a simplistic response to this kind of violence: increase the strength of state institutions like the military and police. This, however, fails to account for the depth of corruption within the military and police themselves. Impunity. Essentially the government has been taken hostage by the most powerful individuals in the country. There are police, prosecutors and judges, but they serve only the most powerful, not the people they have the responsibility to protect. The national election. Honduras will have national elections on Nov. 24. Padre Melo said he is very doubtful that the elections can solve the political, social and economic challenges facing Honduras, but he supports the elections because there is no other clear path to justice. “We accept the elections,” he said, “but need to be critical of the politicians and make demands on them.”

Is there any hope for positive change? Is there anything we can do as Americans and as people of faith? Tomorrow I will offer more personal reflections on my experience of traveling the country, listening to stories, and wrestling with the many challenges facing Honduras and the seemingly elusive solutions.

Luke Hansen, S.J., is an associate editor of America.

Here is a second reflection on the experience, and a photo journal.

Luke Hansen
hansen@americamagazine.org
Show Comments (
2
)
Comments are automatically closed two weeks after an article's initial publication. See our comments policy for more.
John Donaghy
8 years 2 months ago
Thanks so much for reporting about the country where I am serving (in Santa Rosa de Copán, Honduras). So little is written and the struggles of the people are unknown - both the struggles of the people in the North against mining and other interests that seek to take their land and the struggles of the poor majorities to survive on poor or little land where I am. Gracias - and continue the coverage.
Sara Damewood
8 years 2 months ago
Thanks for this good article. We need to be educated about Central America.