Proud, this morning, to be Catholic

At the end of Mass this morning in my central London church, my parish priest stepped forward to read the powerful, gracious and unambiguous statement on clerical sex abuse issued last Friday by the Catholic bishops of England and Wales. The repeated use of the words "shame", "scandal", "crimes", "reparation" and "atonement" cast a sombre pall over the post-Communion stillness.

After reading it, he spoke of how in 2000 Cardinal Cormac Murphy-O'Co 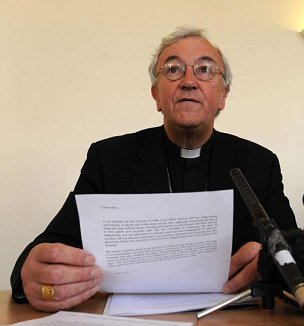 nnor, haunted by his own mishandling of a paedophile priest, and determined never to let it happen again, had invited an independent statesman to tell the Catholic Church how to put its house in order.

The 2001 Lord Nolan recommendations, accepted in full by the bishops, became model guidelines for other bishops' conferences around the world, and a model for other institutions in Britain. One guideline was that in each parish there should be a "safeguarding officer", a lay person who would vet -- through a process called the Criminal Records Bureau -- anyone in the parish who had access to young people or vulnerable adults, and would be a contact for anyone with any concerns.

Fr Pat asked her to stand up and be identified.

He then made an appeal for anyone in the congregation who had been abused by a priest or religious or church employee to identify themselves, if they hadn't already done so, to him, or the safeguarding officer, or the diocesan authorities.

"I promise you that you will be listened to, and what you say will be acted on," he said, adding: "It's time to get all this out into the open."

The Church would come through this better and humbler and stronger, he said, adding that in future we would have better priests. It was a terrible time to think of a priestly vocation, he said, pointing to the seminarian behind him who had addressed us earlier from the pulpit about his faith journey, "unless you have faith. And I have faith in your faith in us," he said.

We clapped. And for the first time in weeks, I felt proud to be a Catholic. I didn't just have to apologise for cardinals Bertone, Castrillon and Sodano; here was another Catholic abuse story that was much bigger than Friday's bombshell of a Belgian bishop who had abused a nephew -- the sad, tawdry world of addiction and denial compounded by clerical hauteur.

Or rather, it was a little, local glimpse of a much bigger story: the story of a death and a rising.

And this, it hit me, is the difference that the Body of Christ makes. What other institution has done this, was capable of doing this -- of rising up from this level of failure and denial, from this scale of media assault?

There is a turning point in this crisis. We may not reach it all at the same time; and many parts of the Church have not even begun to reach it. But this morning I saw what it looks like.

I'm 70 and don't have many more years to wait.
Jeff Bagnell
12 years 7 months ago
No other institution could survive the pounding of things like this, and the radicals let loose after Vatican II, than the Catholic Church.  It is proof that the Church is indestructible.
12 years 7 months ago
Amen, Jeff. While we are waiting for apologies, we can do penance and reparation to soften the blows and injuries inflicted upon His Sacred Heart...
JudyAnn Masters
12 years 7 months ago
Well done!! Great Article!! In that same parish we had a different priest read the letter, and he made no comment. The people also applauded. Let's hope it does go worldwide.  :-)  Jx
Mike Departny
12 years 7 months ago
Have you all lost your eve loving minds? Or are you completely devoid and out of touch with reality. Let me clarify for you.

Children were abused
Some were flat out tied up and RAPED
Some were deaf physically handicapped.

These children will not have normal lives. They will never have a meaningful relationship and have to go thru years of intense therapy. A priest TOOK their childhood.

But you expect a simple "we are sorry" to cut it? You have all lost your minds. Completely. I embarassed to be a catholic. The excuses flying out of the vatican are amazing, Its because of the gay priests, Its not only us, look at the schools. I refer to the above points.

Someone needs to smack all of you in the face with some reality. I suppose if your son, daughter, neice, nephew, cousin was bound and brutelly assoulted you would all be "ok" with an "im sorry" from the church.

Ugh...
Mike Departny
12 years 7 months ago
Seems like the moderator has an issue with the "truth"
Lets assume for a moment that it is your son, daughter, neice, nephew, cousin was bound and brutelly assaulted. Are you going to pay for the intense therapy that they will need for the rest of their life? Practically putting you in the poor house? Or god forbid they actually end up taking their own life (note this was jist of my last comment that was deleted by the moderator).... Would you then be ok with the "we are making things better", "We are sorry" blah blah blah.

Im afriad not a single one of you really has any idea of the scope of this issue.
Check this site. It might hit a little closer to home.
http://en.wikipedia.org/wiki/Roman_Catholic_sex_abuse_cases_by_country
This is just top level, you can then click into each country to really see what you are talking about. Would any of you above be brave enough to stand in front of the thousands of victims and say "sorry" How do you think that will go over?

I cant believe the applause and frankly I am disgusted as a fellow catholic to hear a defining silence when there should be an uproar from within the church. The defining silence is nothing less then agreement on the way the Vatican has treated this. I am done, I wash my hands completely of the catholic church. I flat out refuse to endorse child rape.
Jeff Bagnell
12 years 7 months ago
I'm more familiar with it than you think.  But the mistake you are making is to throw the baby out with the vile bath water.  I'm not sure what the remedy is you seek short of summary execution of the hierarchy?  That would just be evil on top of evil.
Jim McCrea
12 years 7 months ago
How about summary "retirement" of the hierarchy?  I'm sure we can find enough folks who couldn't do any worse than has been done by the generally current crop of toadies!

Successors to the Apostles, indeed!  What a farce this claim has turned out to be.