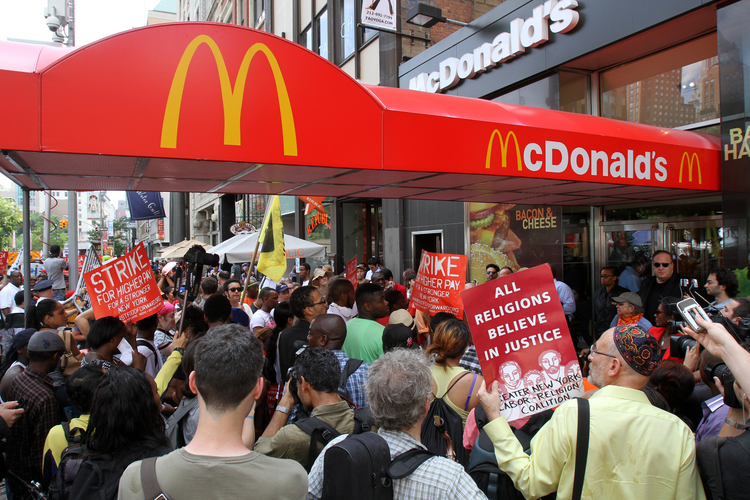 Workers around the country stepped away from their jobs at fast food restaurants and other low-wage sites on Dec. 4 in protests demanding improved wages. They say their wages are too low to support their families and that many as a result rely on government assistance to get by. The typical fast food worker is no longer a teen seeking extra pocket money. Today's fast-food worker, according to a report by the University of Illinois and the University of California, Berkeley, is typically over 20, often raising a child, and just under 70 percent are the primary wage earners in their families. According to the study, 52 percent of full-time fast food workers qualify for federal assistance at a cost to tax payers of $7 billion a year.

The protestors' message is timely as income inequality grows and the U.S. middle class staggers. The fast-food workers' campaign even received an endorsement from President Obama during his address on economic mobility yesterday.

"It’s well past the time to raise a minimum wage that in real terms right now is below where it was when Harry Truman was in office," the president said. "This shouldn’t be an ideological question. It was Adam Smith, the father of free-market economics, who once said, 'They who feed, clothe, and lodge the whole body of the people should have such a share of the produce of their own labor as to be themselves tolerably well fed, clothed, and lodged.' And for those of you who don’t speak old-English—let me translate. It means if you work hard, you should make a decent living. If you work hard, you should be able to support a family."

Rep. George Miller, D-Calif., and Sen. Tom Harkin, D-Iowa, have introduced legislation to raise the minimum wage nationally to $10.10—a vast improvement over the current $7.25 an hour, it would still leave the current minimum with lower earning power than it was in 1968 when it was $1.60. In New Jersey, a proposition to raise the state minimum wage to $8.25 and index it to inflation passed handily over the opposition of Gov. Chris Christie, and nationally 19 states have higher minimum wages than the national one of $7.25 an hour. In Washington state, a local referendum in the community of SeaTac, home of the Seattle airport, to raise the minimum wage to $15 passed narrowly over the intense opposition of the business community.

In testimony before Congress in June, Bishop Stephen E. Blaire of Stockton, California, supported not a minimum wage, but proposed the Catholic social teaching's notion of a "just wage." Quoting Catholic teaching from Popes Leo XIII, John Paul II, Benedict XVI and Francis, on the rights and dignity of workers, he said, "A just wage confirms the dignity of the worker. And conversely, a wage that does not even allow a worker to support a family or meet basic human needs tears her down and demeans her dignity. The worker becomes just another commodity."

"We can begin the process of fixing our economy by returning the worker to the center of economic life," he told a Congressional committee. "One of the best ways to do that is with decent jobs that pay just wages, thereby honoring human dignity and restoring hope to workers and families. Increasing the minimum wage to a level that reflects the real economic reality faced by families today would go far in building an economy worthy of the humans that operate in it."

Support for a minimum wage hike also crosses partisan lines, though Americans who identify with the Tea Party movement stand out for their significant opposition to the measure. Nearly 9-in-10 (89 percent) Democrats, roughly 7-in-10 (68 percent) independents and a majority (57 percent) of Republicans favor an increase to $10 per hour. By contrast, only about 4-in-10 (42 percent) expressing support for increasing the rate to $10 per hour and a majority voicing opposition (57 percent).

In his testimony Bishop Blaire said the Working Poor Families Project reported that there were 10.4 million low-income working families in 2011, including 23.5 million children. "Work should be a ladder out of poverty for families, it should not trap them in poverty," said Bishop Blaire. "Yet this is where we find ourselves—a growing number of families are working but do not make enough to live in dignity. It is a scandal that the richest country world has allowed over 23 million children in working poor families to become the norm."