In prison, the presence of God is palpable.

In prison, the presence of God is palpable. 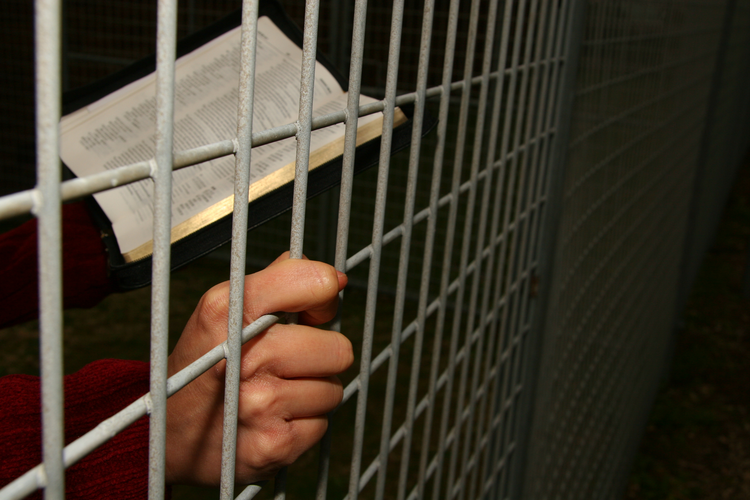 I didn’t know that a prison yard was going to be a congress of world religions until I got here. In this nation of 1,200 incarcerated souls, layered two-by-two in eight different dorms, there are reverent members of many faiths. There are Catholics, Protestants, Muslims, Mormons, Jews, Hindus, Buddhists, Druids, Odinists, Native American spiritualists, Wiccans, Satanists, atheists and Toastmasters. All right, Toastmasters is not a religion, but they are the newest group on the yard. The Dungeons-and-Dragons guys are pretty fervent, too, but I don’t think they consider their pastime a religion. Yet.

The yard I work on is like a living representation of one of those “COEXIST” bumper stickers that use religious symbols to spell the word. You know, the “C” is a Muslim crescent moon, the “O” is a peace sign, the “X” is a star of David and the “T” is a cross. Worship in prison requires the same kind of compromise. There are several chaplain positions that often go unfilled—Jewish, Muslim, Catholic, Protestant, Native American—and the chaplains are supposed to cover the spiritual needs of all five yards in the prison. Religious volunteers come in to lead some of the other groups’ services. Still others are do-it-yourself, inmate-led gatherings. There are three chapels on my yard, one Catholic, one Protestant and one interfaith, but there is talk of making all three spaces non-denominational, in order to accommodate all kinds of services without offending anyone’s religious sensibilities. This proposal in itself, of course, is offending people.

I am familiar with this meeting of world religions because I used to be a Catholic volunteer who came in and led Communion services a couple of Saturdays a month, and because I now work in the prison library, where, on the days when nobody else’s copier seems to work, I make copies for the different denominations. I have copied the guitar chords to "Amazing Grace" and the words to Buddhist chants, the list of people fasting for Ramadan and the key to Druid symbols, sometimes all in one morning. I try to treat each group with respect. My job makes it easy to be a lifelong learner.

I get to see how people of many faiths can get along in very close quarters. I also sometimes see the power struggles that seem to go hand-in-hand with organized religion, no matter where the church is located. Some groups are more prone to infighting and massive reorganization, while some just seem to keep on keeping on, no matter who is running the show. The yard is a microcosm of the town of which it is not really a part. I live in a town of many churches, a church on every corner, almost more churches than residents, and I have seen the faithful of various denominations melt down and switch allegiances and sue each other and rename their facilities. I have also seen small communities do an awful lot of good for others. It is the same in prison.

People in trouble often turn to God, and the God of second chances is a strong figure in prison. Prisoners have a lot of time to rethink their lives and reevaluate where they’ve taken seriously wrong turns. There is perhaps a higher percentage of soul-searching among the incarcerated than among the outside population, and there might be a lesson there. The different faith groups on the yard are accommodated by government mandate, but they are also there for spiritual awakenings. Whenever I am there, the presence of God is palpable.

I believe in one God, and I figure most of these guys do, too, even though they have different names and images for the Creator. I also figure that, no matter what our creed, if we are honest enough to recognize our faith as a humble thing, we definitely have one prayer in common: “I do believe; help my unbelief!”

Show Comments (
1
)
Comments are automatically closed two weeks after an article's initial publication. See our comments policy for more.
Winifred Holloway
3 years 11 months ago
Yes, God is large. We are small. Though not always humble. When we are in the company of the wounded who continue to search for God, our trivial debates about how many angels on the head of a pin make us organized religion people look ridiculous.
Advertisement