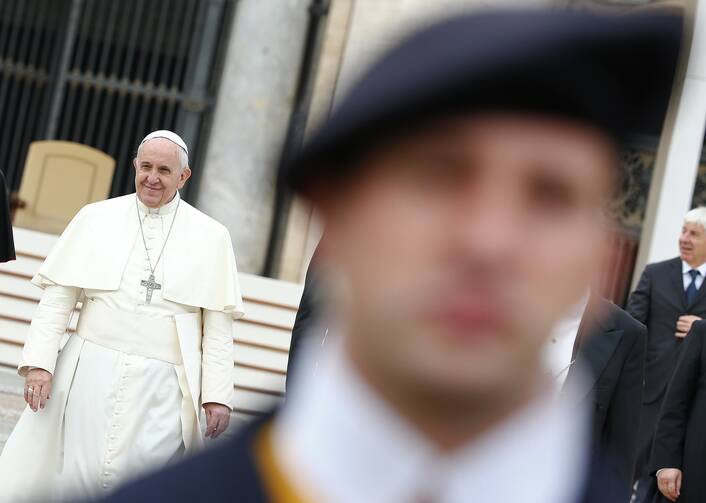 Ross Douthat’s article in the New York Times on Sunday sounded the alarm: Pope Francis through his Synod on the Family has brought the church to the edge of a precipice. If the synod continues on its present trajectory, it will “sow confusion among the church’s orthodox adherents” and could lead “eventually to real schism.” This is a dire prediction. It is also call to arms.

Change is in the air at the synod. To that extent Mr. Douthat is right. Moreover, change is problematic for an institution whose very reason for existence is to preserve and proclaim unchanged a message received long ago. Yet, given our human condition, change is inevitable. Sometimes change is required precisely in order to remain faithful to the tradition. It has in that way been operative in the church from the beginning.

Every council in the history of the church has been an instrument of change, and the synod is in effect a mini-council. Pope Francis convoked it for an examination of conscience about a range of questions directly or indirectly affecting the Sacrament of Matrimony. What will result from this examination? We don’t know. Will it be a declaration, a decree, a simple report? We don’t know. No matter what the form, what will it say? We don’t know.

The synod has completed only part one of a two-part meeting. It has at this juncture issued no decisions, and the “final report” of last week is by no means the last word. The prelates who are participating now have a year to reflect and consult. When they return to Rome they will continue to debate the issues, and then, we presume, will issue an official document in their name and in the name of the Holy Father.

Mr. Douthat cites Vatican II favorably as an example of a council where the debates “while vigorous, were steered toward a (pope-approved) consensus.” This is true. The debates were vigorous, sometimes fierce, a phenomenon of many councils besides Vatican II. Douthat cites the documents on religious liberty and “Judaism” (that is, “Nostra Aetate,” on non-Christian religions) to make his point, They passed, as he correctly states, with “less than a hundred dissenting votes out of 2,300 cast.”

Yes, they finally passed with that degree of unanimity. But before they reached that point they were so hotly contested and seen as such radical changes in Catholic tradition that the Secretariat for Christian Unity, the body at the council responsible for them, seriously considered withdrawing them from the agenda rather than risk a vote.

The pope-approved consensus was achieved at Vatican II only after all parties were heard from and then worked together to see what they could agree upon. The bishops seized the opportunity to speak their mind on issues that until then had been off-limits. Now, at the synod, Pope Francis encouraged the bishops to do the same, to speak their minds “without fear.” They have done so on issues that for at least the past 35 years have been crying for attention.

I am Catholic enough to assume that next year the synod will move to what Douthat calls a “pope-approved consensus.” It is the Catholic way. The synod has in fact already moved in that Catholic way and given every indication that it will continue to do so. After the synod as before the synod, we will face difficult times. But we are not on the edge of a precipice.

What, then, is to be said about Ross Douthat’s arguments? I expected better from him, and he can do better. A case can be made for his concerns. Yet this is not it. Mr. Douthat’s arguments are so loaded with questionable assumptions, historical and theological short-cuts, and parti pris that it is difficult to know where to begin.

A self-professed conservative, Douthat assumes that “conservative” (as he understands it) and “orthodox” are interchangeable. In this logic, “liberal/progressive” and “heterodox” are similarly interchangeable. That is a harsh judgment, difficult to sustain. After all, at Vatican II the so-called progressives turned out to be the orthodox.

But there is a much more disturbing feature in Douthat’s analysis. He, and presumably all “conservatives,” stand unflinchingly against change on “communion for the remarried.” It is specifically this change that would “sow confusion among the church’s orthodox adherents—encouraging doubt and defections, apocalypticism and paranoia.”

What is being said here? I think we can assume that change, if it comes, would come from the synod, a body of duly ordained bishops at a meeting duly convoked by a duly elected pope. It is a body, moreover, that has at its disposal the full range of Catholic theologians and theological opinion on a world-wide basis. I think we can assume that, influential though the reigning pope always is in such situations, Francis neither wants to nor is able to force his agenda (whatever that might be!) on the members of the synod. I say that in the face of Mr. Douthat’s insinuations to the contrary about Francis.

While the synod is in session as a body of bishops working collegially with the pope to take measures for the good of the church, it is a binding and authoritative teaching organ in the church. Do not all orthodox Catholics believe that that authority is to be accepted over their own personal fears, expectations and hopes?

Do not all orthodox Catholics believe that that authority is most certainly to be accepted over the objections of “a minority—sometimes a small minority,” as Mr. Douthat describes himself and his fellow-travelers? This minority self-identifies as orthodox and, it seems, potentially more orthodox than the synod. But it is a self-identification without credentials to validate the claim.

Finally, what are we to make of this: “Remember there is another pope still living!”? “Another pope still living!” This sounds like a threat. Are Mr. Douthat and the like-minded Catholics for whom he speaks appealing to a pope more to their liking over a pope less to their liking? If so, the statement has a regrettable sinister ring. Or what? Let’s hope that Ross Douthat does not mean his reminder to be as schism-suggesting and radically un-Catholic as it sounds to my conservative ears.

John W. O'Malley, S.J., is university professor, theology department, at Georgetown University and author of What Happened at Vatican II.