Pope Francis in the States: A National Photo-Op 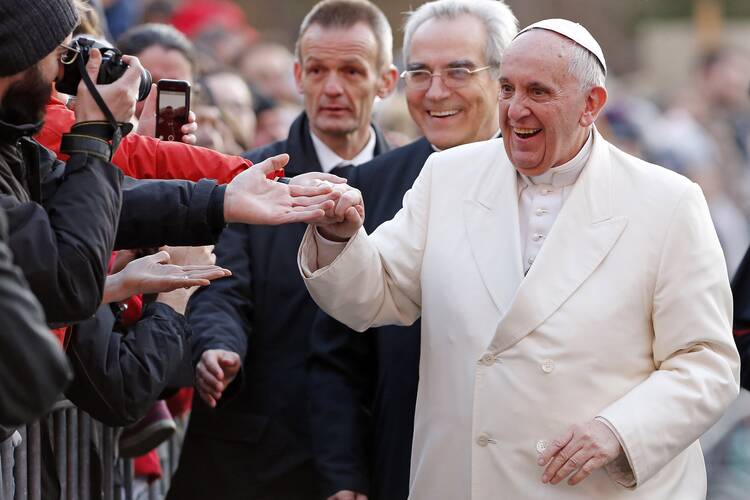 With its star figures and cheering crowds, a papal visit can seem like a giant photo-op. With Pope Francis, the event becomes an opportunity to take the church’s message far and wide, even to Catholics who seldom darken church doors.

The pope arrives Sept. 22 at Joint Base Andrews in suburban Maryland, which means he arrives in the Archdiocese of Washington headed by Cardinal Donald W. Wuerl. There is a pastoral nature to any visit to an archdiocese, so one might expect visits to major church venues, such as St. Matthew’s Cathedral and to the Basilica of the National Shrine of Immaculate Conception.

How do you bring the pope to as many people as possible? In nice weather, this means hosting large events without many physical constraints, such as motorcades along the streets and events in open spaces such as the campus of The Catholic University of America.

The contributions of women religious are worth noting. The papal visit falls during the Year for Consecrated Life and follows up on the visit to all U.S. apostolic women religious by Holy Family Sister Mother Clare Millea. It might be a good time to celebrate all women religious given the successful visitation undertaken by Mother Millea.

As the headquarters of the U.S. Conference of Catholic Bishops, Washington seems like the place to meet with all the bishops on important pastoral issues, including relations with political leaders, the need for efforts to promote vocations to priesthood and religious life, efforts to increase church attendance and the call for Hispanic outreach. Today there are more than 30 million Hispanic/Latino Catholics in the United States, and Washington has a concentrated presence of Hispanics.

The invitation to visit to U.S. Capitol first came from House Speaker John Boehner, a Republican, followed by an invitation from House Minority Leader Nancy Pelosi, a Democrat. It has political overtones. President Obama also invited Pope Francis. One also might expect a visit to the White House, where in 1979 Pope John Paul II met President Jimmy Carter and where in 2008 Pope Benedict XVI met President George W. Bush.

An address to a joint meeting of Congress stands as a major historical event that has been anticipated since Speaker Boehner invited Pope Francis to the United States in March 2014. It also might be an opportunity for Pope Francis to emphasize what the church does for the poor through its social agencies, always a good photo-op. The pope’s basic message whenever he meets world leaders, however, has been that we can all do more. No surprise if Pope Francis asks the richest country in the world to do more. Among specific issues the pope might address is a continuation of what he has stressed before in meetings with U.S. officials: immigration, care for the poor, peace, religious liberty, perhaps racial justice, life issues and international aid.

Help for the poor, stands as an issue of highest concern for Pope Francis whenever he visits a nation. From soup kitchens to food pantries there is much to highlight this in Washington.

Openness to immigrants has stood as a hallmark of our nation since its foundation. As a pressing political issue now, it would seem appropriate for the pope to speak to the needs and contributions of Hispanic immigrants especially.

An understanding of religious freedom could be a proper theme. U.S. Jesuit Father John Courtney Murray provided the background for the church’s document Dignitatis Humanitas, a key document of the Second Vatican Council 50 years ago and a major development in church teaching.

On Sept. 24, Pope Francis will travel to New York City, home of four million Catholics, for an address at the United Nations the next day. One would expect the pope to visit St Patrick’s Cathedral, currently under renovation.

A short ceremony there such as vespers on the 24th might be appropriate. New York, with its significant Jewish community, is a logical site for an interfaith meeting, including not only Jews but also Muslims and other interfaith groups. Interfaith speeches could stress the need for interfaith initiatives to work toward peace in the Middle East.

What has been emphasized in the international community is the Sept. 25 meeting at the United Nations. A Mass at Madison Square Garden has been discussed for the same day. Possible topics for discussion in New York include:

The speech at the United Nations that would likely be followed carefully by the global community. Pope Francis has spared no words when it comes to global concerns for everything from the environment and migration to religious freedom and poverty, for example. This is a perfect venue for the pope.

Mass at Madison Square Garden also offers the opportunity to stress pastoral issues such as church attendance, sacramental practice and the role of the laity, vocations and outreach to others to be part of the Catholic community.

One expects Pope Francis to head for Philadelphia Sept. 26, for the World Meeting of Families and to depart from the City of Brotherly Love the next evening. Following custom, one can expect a visit to the local cathedral and an address to the attendees at the international families meeting. Philadelphia is home to 1.5 million Catholics. An open-air Mass the next day on the Benjamin Franklin Parkway has been discussed and would offer virtually unlimited attendee capacity. A high interest event such as a visit to prison also might be expected and typifies Pope Francis’ concern for those on the margins of society.

Critical issues on family life, including divorce and remarriage, reception of Communion by those who have divorced and remarried without an annulment and easier use of the annulment process also seem likely topics.

Nothing is ever set in stone for a papal visit until it actually occurs. I have seen papal motorcade routes change and surprise visits with victims of sexual abuse by clergy take place. However, we can be sure that the September visit will provide many opportunities and ways for Pope Francis to bring the Gospel to America and the world.