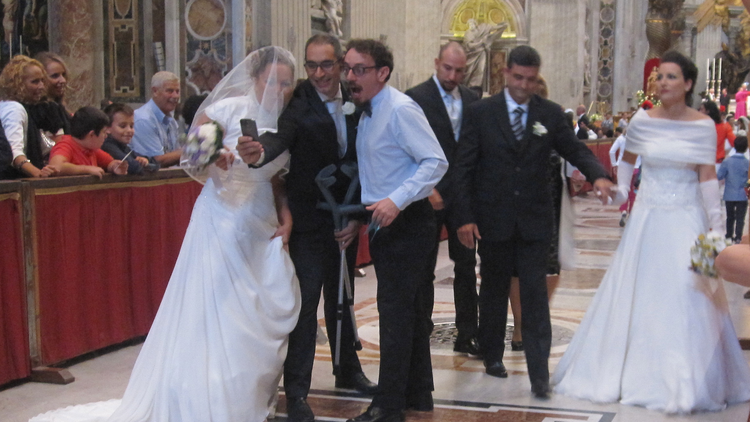 Pope Francis presided over the weddings of 20 couples in a historic ceremony Sunday at St. Peter’s Basilica in Rome. As noted in an announcement put out by the Diocese of Rome, among the couples married at the Mass were some who had children or cohabited before marriage, as well as a groom granted an annulment for a previous marriage. "We didn't feel worthy,” one bride recalled, when told that she and her husband were invited to be married by the pope.

During his homily Sunday, Francis alluded to the challenges facing modern marriages when he said that God’s mercy:

“... Applies also, in a particular way, to spouses who ‘have become impatient on the way’ and who succumb to the dangerous temptation of discouragement, infidelity, weakness, abandonment…. To them too, God the Father gives his Son Jesus, not to condemn them, but to save them: if they entrust themselves to him, he will bring them healing by the merciful love which pours forth from the Cross.”

I’m in Rome as a participant in the “Church Up Close,” a conference for journalists covering Catholicism during Francis’ dynamic papacy, and our event's organizers were able to secure tickets to the Nuptial Mass, so I had a front-row seat to the group wedding, alongside many of the couples’ family members. Attending Mass at St. Peter’s with Pope Francis presiding was a treat enough--but a few moments of the ceremony were truly sublime.

To start the Mass, the grooms processed to the altar with their mothers, then the brides with their fathers, and then the papal procession. The second wave of brides was led by a woman and man, presumably her father, who struggled to walk with the use of two arm crutches, and labored to move his feet with each step. In the age of Francis, it’s hard not to see a disabled person’s interaction with the pope as part of some larger Christian message, but the man’s long, proud journey up the aisle today seemed more a part of the universal joy of a father giving his daughter away in marriage. Many of us were moved to tears.

Some general promises were recited as a group, “Si. Si. Si.” and then others, including the exchange of vows and of rings, were done by each couple individually, above the elegant melody of a harp. When one groom began to weep while reciting his vows, we were drawn back to the reality that while the 40 individuals being married were sharing in one ceremony, there were also 20 unique marriages beginning today.

And of course, the brides were beautiful.

Francis’ act of mercy—a ceremony marrying couples whose circumstances reflect the reality of modern sexual and marital habits—is particularly noteworthy in light of the upcoming Synod on the Family (Oct 5-19), which will explore how the church can better respond to the many challenges to family life.

The talk in Rome, from church-watchers, Catholic leaders and Catholics roaming St. Peter's square, is that the choice to marry these couples is no small hint about Francis’ view of role that mercy should play in discussion during the upcoming Synod. This week’s Wednesday address seemed to set the tone for these upcoming events—and for the wedding today—when Francis compared the church to a merciful mother who teaches her children by her actions, adding:

“The church acts like Jesus. She does not give lectures on love, on mercy. She does not spread a philosophy, a path of wisdom throughout the world. ... Of course, Christianity is all this, but as a consequence, in reflection. The Mother Church, like Jesus, teaches by example, and uses words to illuminate the meaning of her gestures.”

Show Comments (
1
)
Comments are automatically closed two weeks after an article's initial publication. See our comments policy for more.
Bill Mazzella
5 years 5 months ago
Now we have a pope who understands the words of Jesus. How the church became so dogmatic and mean following Jesus who spoke to a woman who had five husbands, is amazing. Jesus is always inviting. He didn't build one Cathedral. He showed mercy and compassion while challenging us to live better lives. The gospel has always been there. And still is to shame clergy who make religion a source of power and glory, rather than generosity and love. The Beatitudes.
Advertisement