Pope Francis, the CDF and the LCWR 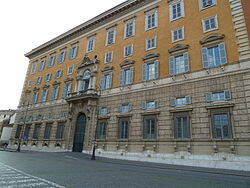 Today the Vatican’s Congregation for the Doctrine of the Faith issued a statement about the ongoing oversight and “reform” (to use their word) of the Leadership Conference of Women Religious, the main umbrella organization of women religious in the United States, which represents roughly 80% of American Catholic sisters and nuns.  In their statement, the Congregation noted that the new prefect of the Congregation, Archbishop Gerhard Ludwig Müller, as well as Archbishop J. Peter Sartain, the Holy See’s Delegate for the Doctrinal Assessment of the LCWR, met with the Presidency of the LCWR.  Archbishop Müller also noted that he had spoken with Pope Francis, who “reaffirmed” the findings of the Assessment, and the “program of reform.”  The LCWR issued a statement, which listed the participants in the meeting in full, and said that the meeting was “open and frank.”

Several things need to be kept in mind before people jump to conclusions about what this may or may not portend.

First, Pope Francis is brand new to his job, and it would have been odd for him, as some may have expected, to essentially undo a process that has been in the works for several years.  (The “Doctrinal Assessment” of the LCWR followed the “Apostolic Visitation” of women’s religious communities in the United States, and eventually led to the institution of an oversight panel for the reform of the LCWR, headed by Archbishop Sartain of Seattle.)

Second, it’s difficult to imagine that Cardinal Jorge Mario Bergoglio was following this investigation all that closely from his post as Archbishop of Buenos Aires.  On the other hand, perhaps he was; but still, probably not in the level of detail that would give him the confidence to undo, or even alter, a process that was currently under way.

Third, Pope Francis, in one of his first moves, appointed Jose Rodriguez Carballo, OFM, head of the Franciscan Order (OFMs), to a key post in the Congregation for Religious (technically the Congregation for the Institutes of Consecrated life and the Societies of Apostolic Life ) which, to me, indicates an overall sympathetic approach to religious orders of both men and women.  Indeed, at the time, Vatican Insider wrote, “Informed sources in Rome now say that by choosing Carballo, Pope Francis has clearly opted for a different, more Gospel-inspired approach to consecrated life in general and, also, to help overcome the ongoing, painful tensions with the American religious women.”

Fourth, as a member of a religious order (the Jesuits) the pope is naturally going to be sympathetic to many of the challenges of men and women in religious life.  The LCWR will, I'm convinced, get a fair hearing from Pope Francis.

Finally, and more for the record, the LCWR meets annually in April with various Vatican dicasteries, including CDF, so this meeting was apparently planned for some time

Overall, I’m not surprised that a new pope would not undo an ongoing process, nor do I think this spells doom for the Leadership Conference of Women Religious.  Let’s join the LCWR in prayer, who wrote today, “We pray that these conversations may bear fruit for the good of the Church.”

James Martin, S.J.
@jamesmartinsj
Show Comments (
27
)
Comments are automatically closed two weeks after an article's initial publication. See our comments policy for more.
Cody Serra
8 years 6 months ago
And so we pray for the Sisters, the Pope and fairness in the process, and at the end. Patience is sometimes a difficult virtue to practice. Faith tested more difficult yet. Fr. Martin's suggestions about Francis decision to continue the process sounds reasonable, though speculative at this point, and based of what we know about the new Pope and his spirituality. At the moment, let's join the sisters in prayer that "the conversations may bear fruit for the good of the Church".
Michael Surufka Ofm
8 years 6 months ago
In Italian political style, it seems like CDF had to do something, and LCWR had to say something -- and each did a little bit of something without much of anything. All will be well.
Alan Mitchell
8 years 6 months ago
I agree. The statement is minimalist, including a second hand report from Cdl. Müller about Pope Francis' "reaffirmation", whatever that means. We do not know what the Pope actually said. We have only the cardinal's interpretation of what he may have heard. The statement strikes me as posturing on the part of CDF, which is only one party in the discussion. The Congregation for Religious seems to have a different view of the matter. If it comes down to Müller vs. Carballo, my money is on the Franciscan.
John Mack
8 years 6 months ago
Excellent comment.
Michael Perigo
8 years 6 months ago
The process won't be the end of the LCWR, but it will result in changes that will strengthen the organization's institutional ties to the Church and to some additional oversight of its activities. There were legitimate concerns about the direction the LCWR, as a Vatican-sponsored organization, was taking. If the LCWR membership cannot accept the changes (whatever they are), they can always create their own secular umbrella organization, independent of the Church; however, that would almost certainly speed their estrangement from the Church, isolate themselves from Church-sponsored ministries and resrouces, and marginalize their future impact.
Rachel DeBruin
8 years 6 months ago
Thank you for saying this. For some, it would be hurtful to hear that the Pope will be continuing this process for review and reform. Your arguments help me continue the hope that I have had since Pope Francis was named as our leader. Just like any president does not overturn a process the moment (or within a month) of his stepping into office. It takes time, prayer, and courage to be sure he is leading his flock in a way that emulates Jesus and Jesus' Holy Spirit.
Rosemary McHugh
8 years 6 months ago
This is very disappointing that Pope Francis has not investigated the background of the LCWR criticisms before giving it his full backing. To my understanding, Cardinal Rode stated that Cardinal Law was the instigator of the review of the nuns. Why is Pope Francis trusting anything from Cardinal Law and the Vatican and the Curia? Archbishop Sartain had been the bishop in my diocese of Joliet, Illinois until recently. The Vatican pulled him out of Illinois and elevated him to be the Archbishop of Seattle when the young man who Bishop Sartain ordained, with known sexual problems, was jailed for sexual abuse of little boys in his new parish. As a Catholic physician, I ask myself how can Archbishop Sartain, who lacks such wisdom and discernment to ordain a predator be elevated to a higher office and be allowed to sit in judgement of nuns? This is so wrong! How can Pope Francis, a Jesuit who stands for social justice, be a party to this injustice against the nuns? I hope and pray that Pope Francis will reassess and remove Archbishop Sartain from the position of sitting in judgement of the nuns. Sincerely, Dr Rosemary Eileen McHugh, Wheaton, Illinois
STEVEN MILLIES
8 years 6 months ago
I'll say, though, having spent the weekend meeting with a group of sisters at the college they sponsor--it seemed to me that they need a sign of hope from Pope Francis. What we're doing here is contextualizing, rationalizing, and explaining that this development may not be as bad as it seems. That's all well. It may not be that bad, in fact. But it's also not the hopeful sign that these beleaguered women were hoping for, and that is a sign that their need for hope has not been noted. That is the worrying thing.
Helen Smith
8 years 6 months ago
"Finally, and more for the record, the LCWR meets annually in April with various Vatican dicasteries, including CDF, so this meeting was apparently planned for some time." If that be so, why was Sartain there? And why specifically does the statement mention that the pope reaffirmed the assessment.
James Martin
8 years 6 months ago

Archbishop Sartain was there as part of this planned meeting, apparently.